By definition there is only one chance to do anything for the first time, and I always take care to record the event with an appropriate photograph if possible.  Last weekend I caught my first double figure zander for many years, and since that came from a lake, although very pleasing, it was not a true 'first'.

One of my targets this season was a double figure zander off the River Severn or Warwickshire Avon, just one trip so far had resulted in a blank, but now another trip was planned for an afternoon/evening session on the Severn.  A quick trip to the freezer and I soon had a few 3 inch roach/rudd type baits, perfect for the zander as they seem to prefer the smaller coarse fish.  I know that they can be caught on sea baits, sardine and the like, but experience suggests that if available your chances of success are far greater with the fresh-water type baits.

I had decided to use my Drennan 2lb Bream and Tench rods for the task in hand, far too often the name on the rod dictates its use, but I go by the suitability which is more to do with the test curve and action.  With 12lb main line, and wire traces made up using size 10 trebles I was ready and off I set.  Conditions could not have seemed worse, a heat wave was coming across the country and with temperatures hitting 26C or 27C I was going to melt.  Bright sun blazing down from clear, cloudless skies, did not encourage the thought that the fish would be going barmy on the feed, but it would still be nice to sit on the banks and watch the world go by.

I arrived at the venue to find one obvious effect of the dry summer, while smaller rivers and streams have dried up, the River Severn has all but stopped flowing.  A one ounce lead could have easily held in the minimal flow on the far side of the river but in order to make sure of a positive indication I would use a 2.5 ounce leger weight.  This is to make it more likely that when the fish takes the bait and runs, the line will go though the leder ring rather the moving the weight.  With two of the small roach attatched to the traces and sent out into the river, one about a third of the way across and the other two thirds, I could sit back and relax in the small amount of shade offered by the bush next to my chosen swim.  Looking at the river it definately gives concern that if we have a comparatively dry winter as well, then next year will see major problems of water shortage.  These thoughts soon disappeared as the line came out of its clip, then with the bail arm open it just trickled slowly away as I picked up the rod to tighten down to strike.  All too often this becomes an anti climax as there is nothing there, eel, chub, perch, small zander or pike, we never know, but this time the culprit was still there and the rod bent over in response to its presence.  In that bright sun I was soon looking at my first ever River Severn zander, not big, in fact under 5lb, but hopefully the start of a quest that will see many more and a lot bigger fish coming to the net. 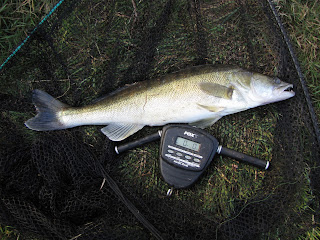 With dusk settling in I hoped for further action as the darkness came, but it was not to be, and about 9:00pm I decided to call it a day and packed up well content that at least I had broke the duck! 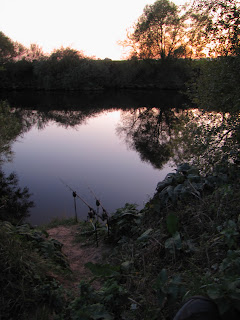 The sun setting over the Severn.

This Saturday I shall be at the PAC conference with my book, if you have not already got one then maybe that will be the time to correct that slight omission, otherwise you can order it through my web page at http://www.philsmithangler.co.uk/.
Posted by Travelling Man at Friday, September 30, 2011