River barbel and a Derwent pb

I was intending to go up to the River Derwent to try out the new ticket gained this year, this would be only my second day fishing the river, the previous time being in the 2006/7 season when I caught a 10lb-3oz barbel to complete the double off that river and hence I did not return.  That was on the Earl of Harrinton's section above Borrowash bridge, now I was going a lot further down the river.
Parking up in the car-park around mid-day, I was alone and I little realised the catch that was waiting for me before I retired off the river at the end of the short session.  I made my way down the stretch and noticed a well used swim, it did fit one of my classic barbel swim descriptions being a section of deeper water following a length of shallows, always a good starting point on any river so dropping my gear I began to set up tackle.
Tackle was as I have used for most of this season, 1.5lb test Drennan barbel specialist combined with 12lb main line on baitrunner reels.  Open-ended swimfeeders carried a mix of 50/50 hemp and pellet, whilst the braid hooklength had a size 8 Drennan Continetal Carp hook with 8mm pellet as bait.
Within the first hour I had an indication of the good day to come as I had caught the first fish of 9lb-8oz quickly followed by a new river pb of 11lb-4oz, what a start!  I could have gone home happy then, but of course I carried on. 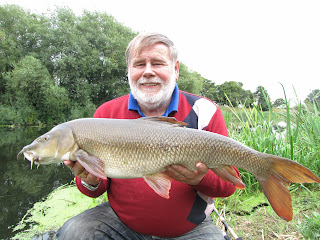 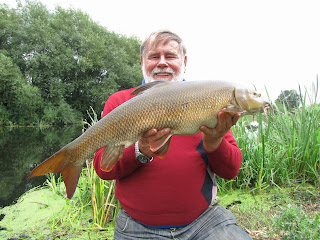 With the sun shining down and the banks to myself, I would cast a new feeder load of mix out into midstream and at regular intervals the rod top would indicate another bite.  Not all these were from barbel as a couple of tench and three bream also came to the net, along with a further four barbel between 6lb and 8lb-10oz.  I also lost a couple of powerful fish, but decided these were foul hook-ups as on the second occasion I brought back three small scales off a barbel, securely impailed on the point of the hook.

Most of this season I have been concentrating on the River Teme and it was a real pleasure to sit comfortably on a fairly level bank, rather than the steep sloping banks so typical of the Teme.  As an aside, it also makes self portait photos far more easily accomplished as well.

Walking back to the van I could only reflect that with 11 fish landed, and a new river personal best, this was one of the good days.  The big fish would be the first to go in the list for any future book I should write, it's too late for the current one since I will take delivery of that within the next two weeks.  Don't forget the book launch at the Land's End Pub, Twyford, Berks. on the 17th Sept, it will be a great day to meet like minded anglers and have a chat over a pint.