River barbel & bream - A nice consolation prize instead of a barbel.

The rain came and settled on the ground going into tiny rivelets that got bigger and bigger as they made their way into the Warwickshire Avon. Arriving in the carpark I was quite surprised to see the colour had hardly been affected, three foot plus visability into the water at least.  The height was up a bit, but not too much, and I was getting to be quite hopeful of a good result.  Once I cast out I realised the error of my ways, rolling blanket weed was obviously going to be a problem.  Not entirely unexpected after the first heavy rain for a considerable time, but the river looked so good on the surface I dared to hope.

My first cast with a pellet as bait soon produced a 6lb-8oz bream so at least I would not blank, some anglers seem to delight in downgrading river bream, but I'm happy to catchone or two as the barbel are known to swim with them!  I had taken casters left over from a previous trip that were getting near their sell-by date, these were bait-dropped on the inside line with the hope that perhaps the weed would not be such a problem there, but I had forgotten the boats.  Each boat that passed stirred the weed into even more action, and at times it was difficult to reel in the big wad of blanket weed that had settled onto the line. The casters did attract a pair of 6oz roach, but a few hours of this and I decided there was always another day when fishing would be more easily done.  Walking back to the car I could not be dissappointed, I got out of the house for my fishing fix, caught a fish, and missed the rain, not a bad result for a saturday afternoon/evening. 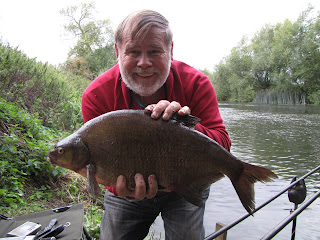