A strange day on the Teme.

I arrived on the banks of the river Teme to an exciting sight, dozens of chub just drifting about on the surface of the river.  That in itself would not have been too much of an event, great to see there are plenty of fish about but they were mostly in the 2lb to 3lb range, and as such not really of interest to me.  As I stood watching though, I did get excited as I noticed the larger shadows holding slightly lower in the water, were these salmon or barbel?  Once I realised just how many of these shapes I could see, I came to the conclusion they must be barbel, salmon are not found in those sorts of numbers nowadays. 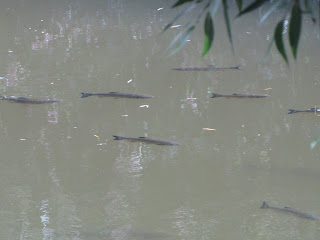 Chub drift around with barbel below

That was enough to convice me to fish the swim, and I was soon settled in place.  Although I was in full view of the fish as I tackled up on a very difficult piece of bankside, the chub did not seem to mind, and I was quite surprised to see most of those fish still drifting around just feet away from my position.  Then I cast out the feeder with the 8mm pellet bait on the hair.  I think someone let off a nuclear bomb as I made the cast, at least the fish seemed to think so as they all disappeared from view within a few moments.

Slowly over the next thirty minutes, they began to appear again and the barbel even gave one of the most spectacular shows I've seen on the bank as on over twenty occasions, a barbel, or probably a number of different barbel, jumped completely clear of the river.  On many of these I could almost count the scales along their flank, otherwise those salmon would have been back in my mind.  I was fully expecting to fill my boots with such a number of fish known to be in the swim, so my catch of one barbel and two chub was very close to total failier.

That did make me wonder just how many times we sit there and blank, perhaps even catch a fish or two as I did on this occasion, and feel the fish were just not in the swim - there is more to this fishing lark than anyone can ever learn in one lifetime, and I look forward to many more years of trying to solve the puzzles it throws at us.
Posted by Travelling Man at Monday, August 08, 2011