Successful days with barbel and sturgeon

I mentioned the blank days but of course there are also the successful ones as well, here I will relate two such adventures.

Wednesday 10th August.   - The Sturgeon Lake.
I went back to the sturgeon lake with Merv in the hope of catching that 60lb specimen sturgeon that swims there.   Great day, not too hot, sheltered from the wind, fish feeding and Merv had the best fight of his angling experience, a 28lb sturgeon that had been on steroids.
Merv ended the day having caught two sturgeon over 20lb, I had three over the 20lb mark but none went over 30lb figure, that was left to some other sod who took a giant just under the 60lb target I had set myself.
No problem, back there next month and I'll try again.  Bad luck though since the book went to the printers today and I'll not be able to put the big one in when I catch it next trip 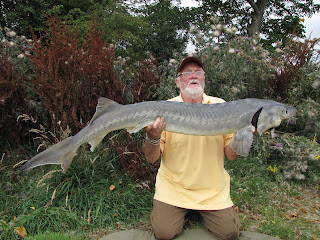 Merv with the best of the day 28lb

This river has been fishing well for me since the begining of this season and I am yet to experience a blank visit on the river, plenty of those on the Trent and Warwickshire Avon though.  As previously mentioned in this blog, I have been using an open-ended feeder with a 50/50 mix of pellet and hemp loaded into the feeder taking care not to cram it in too tightly, I want the particles to break-down and release into the flow at a steady rate.  For bait, I am using a couple of pre-drilled 8mm halibut pellets with a size 8 hook.  Often I read of anglers that change baits to see what happens, will it prove to be a better choice and therefore catch more fish.  I tend to work on the opposite idea, "If it aint broke don't fix it."  Too many times that 'grass is greener' can lead you astray and down blind paths, the that time lost in that search can never be regained.  When I did the 16 different river barbel doubles, about 75% of them were caught using Dynamite Monster Crab boilies, that was in the 2006/7 season and I still use them today.  Coming back to fishing the Teme and that same point of not changing, the pellets have been working here, so why change?

Fishing in a pool below a shallower section of river I was using two rods, sometimes I might have different baits on each of the rods, but this time both had those magic pellets that I was sure would catch me some barbel.  I did not have to wait too long before the first put in an appearence and soon after playing him in, I was returning a barbel of just over 6lb to his watery home.  Great fishing and over the next several hours I took a further four barbel with the best two going 8lb-13oz and 9lb-12oz.  Add to this a couple of chub about 3lb each and it adds up to a successful trip, you need those occasionally to make up for the blank ones! 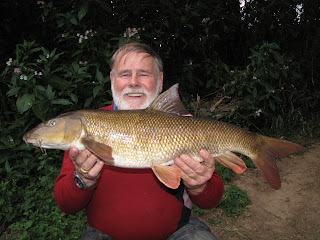