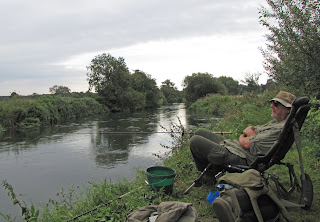 Pete Reading waits for the rod to buckle.
John Found had reserved a couple of days on the Upper Benyons section of the River Kennet on behalf of the Barbel Society, this being arranged through the society being an affiliated member of the Reading & District Angling Association.  For those not familiar with this length of river, it is a medium size river section that twists and turns through scenic countryside whilst offering the barbel angler the chance of a barbel going well into the 15lb plus range of doubles. 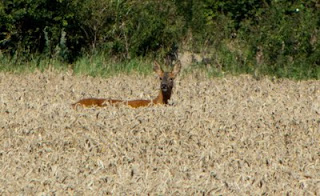 An interested observer of my angling attempts.
As a good friend of both Pete Reading and myself, he had asked us both if we could attend to help with any potential questions and bits of advice that might be needed, we of course agreed and arranged to meet John on the Saturday morning in the car park at 6:30am.  Both days were open to all anglers, whether Barbel Society members or not, and those who had booked their place duly began to turn up well in time for the proposed 7:30am start.  John introduced himself and went through a few points that might help those not familier with the area, perhaps the best being that on this section of river  “If it looks like it should have barbel present, then it probably has.”   Night fishing had been agreed for those that wished to go through into dark and a couple of the lads suggested they might well take advantage of that opportunity.  Now, with all the various points covered, the anglers set out to choose swims.
I went off and set my tackle down in a likely looking spot, and with other anglers about felt it was safe to leave it there while I went to check if anyone wanted a bit of help.  I came across an elderly chap who having recently retired had taken up fishing over the last couple of years.  By his own admission he did not get out too often and any advice would have been most gratefully received, no sooner said than done.  John had already suggested a swim for him to drop in and I started by explaining why this choice looked good to my eye.  Going upstream, and downstream of the swim, the river was probably almost twice as wide as the ten yard section we were standing by.  Those familiar with my writings will already know that this constriction of the river is one of the points I look for on a new section.  All the water upstream of the swim has to come past that spot at the same time, in order to do this one of two things must happen, the flow rate will increase, or the depth of the swim will get deeper, possibly both at the same time.  The river was slightly coloured from the heavy rain a couple of days previous so it was difficult to see the streamer weed, and I made the point that when you bait drop, if the dropper does not open then it is quite possible it landed on weed, just try a slightly different line.  Once the clear line is found where the dropper is opening consitantly, keep the feed tight with hemp being a very good choice of attractor, barbel love it.  He had brought a dropper with him, but it was rather on the large size, good if you intend to fish under your own bank but you are probably better off using one of perhaps 3 inch diameter, this is more easily controlled on the cast and makes less disturbance on its entry into the water.  I went on to explain my thinking about hook lengths and bait size and type, and left a happy angler, slightly better prepared for the day ahead.
When I finally got back to my tackle the lad fishing just down from my swim had already caught a fine example of barbel with a weight of 11lb-14oz.  Taken in the first five minutes of his days fishing it showed the potential for the day and I sat down confident of at least catching something over my two days on the river.  That first day I used pellet and open-ended feeders and following a chub that fell off on the way in, probably not even hooked with the long hair in use, I landed a nice size barbel that showed signs of being retained in unfavourable conditions.  If when you release the barbel it shows the red belly that this fish had then you did it wrong, consider how you kept the fish, and look for a better way of retaining it for the short spell that might be needed for photos and weighing to be completed. 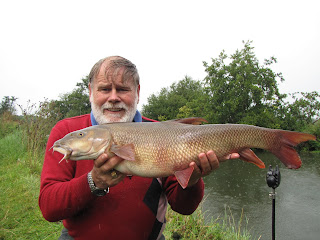 Nicely proportioned Kennet barbel.
The two days went very well, with a number of barbel being caught and lost including another double of 10lb-10oz.  These types of event are more than just fishing days, they allow a social side that can sometimes lead to a friendship that lasts for years, if you have not tried one then watch out for the chance to be involved and give it a try, you have nothing to loose and much to gain. 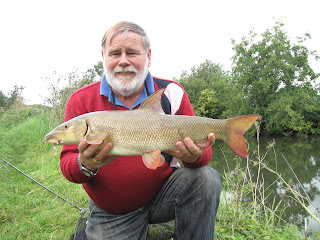 They are not all big, but they all count and fight well.
Posted by Travelling Man at Monday, August 22, 2011