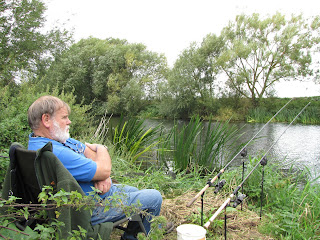 Waiting for that barbel bite.


With the book launch just next Saturday 17th, it is a busy time.  First batch of books delivered today and these will have to be packed and sent off, but even with all the various things that need to be completed I still get out onto the rivers in pursuit of the barbel.  With two 11lb plus barbel already taken off the River Derwent this month, I decided on a trip back to the River Teme, so tackle ready off I set.

Friday 9th September.
With Merv recovering from his hernia opp a couple of weeks ago I decided to offer him a trip out to the Teme for a break from the four walls of the house.  He could not fish, but jumped at the chance so off we set.  Arriving to find the river even lower than previously seen, a thing I did not think could happen, I made my way to a nearby swim, Merv could not walk to far in his condition and that dictated which swim had been chosen. Once in place I could set about getting tackle and bait ready. The usual mix of hemp and pellet was done for the feeder, and this was soon going out into the swim along side a 8mm pellet baited hook.  Over the next several hours I got lots of knocks off those chub, but the long hair did its job and none were hooked.  Then I finally got a barbel, not a big one, but at least I was not to suffer my first Teme barbel fishing blank of the season and I mentioned this to Merv sitting nearby.  'You aint landed it yet' came the comment back, and no sooner said than the barbel threw the hook and was away with the fairies.  I don't loose many barbel to unenforced hook pulls, and when I hooked the next one I quickly told him to keep quiet.
A good fight followed where we discussed the size of the barbel we could see twisting in the clear
water, as it turned out we were both well under the eventual weight recorded.  At 11lb-6oz it was a new river pb and means that of the 20 river doubles I've achieved so far, there are 18 of them over 11lb.  Pleased with that! 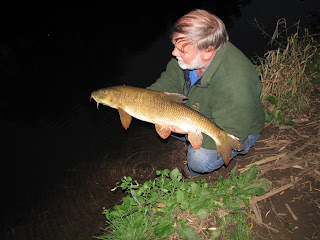 Saturday 10th September.
Went down to the Warwickshire Avon today with Keith Jobling - 9am pick-up and we fished untill 9pm. The river appeared drastically low and clear, and this was reflected in the way action developed over the day's session.  Not a touch throughout the day until dusk when I took a 7lb-14oz barbel on pellet. I did weight this one since you can get out of practice after looking at the Teme fish, they are so long and lean that you easily underestimate barbel off other rivers where they tend to be deeper in the body.
That fish was followed by a 10lb-4oz beauty, and another barbel of about 7lb [not weighed] to round off a pleasing trip. Only problem was leaving home several hour too early. 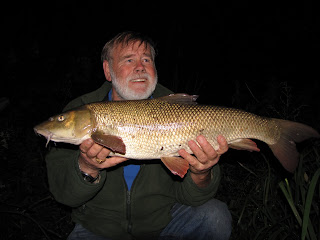 Monday 12th September.
I had to make a trip down to Ross on Wye to meet up with Martin Mumby who did the layout on the book, of course the rods went in as well.  Merv travelled down although he would not be able to fish for some weeks yet, better than going rotten looking at four walls all day, or say he tells me!

The river at Ross has grown to quite a size but with the lack of rain it was running quite placidly, 2oz of lead holding in the middle of the river without a problem.  I started the short session on hemp and maggots, using a large swim feeder to keep the supply of the maggots going in, lots of small stuff would be taking all those offered.   After a few hours without action I changed to pellet and then finally to boilies, not sure if it was the late evening or the bait that made the difference, but I then took two barbel in quick succession, one of about 6lb, and another weighed at 7lb-10oz - Wye fish are slim bodied as with the Teme and again are difficult to estimate - they give a great scrap though. 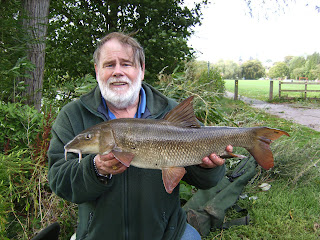 Tuesday 13th September.
Books arrived and packing up to send out.  The post office people are not going to be pleased with this lot all at once, but I did warn them last week what was coming!  The books look and feel brilliant and I'm proud to have yet another volume of my fishing to share with you all.  If you have not already got your order in then check out http://www.philsmithanger.co.uk/ where books can be purchased very easily.
Posted by Travelling Man at Tuesday, September 13, 2011