The search for monster Pike and Sturgeon.

Each season I take the chance of a visit to one of the many trout reservoirs in the attempt to catch a 30lb pike, I say 30lb but in reality a 20lb fish would have done almost as well.  Over the years I have seen many good fish caught, though most of them fell to live-bait both legal and illegal.  I’ve kept to the rules and although not the only reason for my failure, it certainly it did not help my attempts with the result that I still await my first 20lb plus pike from those venues.
This trip I was fishing at Chew Valley with a few friends from the Orchid Lakes region and my boat companion would be John George, good company since I fished the same venue with him last year, though other than some small pike on that trip we blanked.  Unfortunately this year followed the same track, we took a few jack-pike again, but our group of four anglers blanked yet once more with regards to the bigger fish.  John did manage a nice brown trout that gave him a new personal best for the species, but I will have to wait for next year to get that hoped for 30lb specimen, maybe! 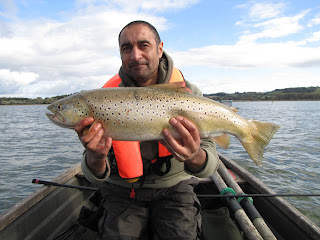 John with his near double brown trout.
Following two long days sitting in a boat the last thing I really wanted to do was go fishing the next day.  Unfortunately when I booked up the days for the sturgeon trips I over-looked the pike trip so I was committed to go.  The fortunate thing is that when the alarm clock woke me at 5:00am that Sunday morning I was eager to go, there is a 60lb plus sturgeon with my name on it and I find this fishing quite exhilarating, even the 20’s can go like a bat out of hell.
Along with my four companions, different ones to the pike trip, we arrived before dawn and it was a case of waiting for the light levels to be sufficient to see the floats once they were cast out.  Just before 7:00am that time came, and out went my float fished salmon chunks, nothing but the best for these fish, and I did not wait long before the float dipped and I struck into a hard fighting fish.  With its power I was forced to travel down the lake and finally landed him some 50 yards or so away from my original swim.  During the final stages of the battle I could see I had hooked one of the big fish known to exceed 60lb, problem was the hook was not in its mouth; not the same but I looked forward to weighing and getting a photo of him as a record of a great scrap.  Simon had recently purchased a 60inch landing net from the Catmasters site, and with this to enfold the fish there seemed little to worry about, but I was totally wrong on that point.
Once the fish was in the net I shot off to get the weighing gear and camera from my tackle-bag, but as I went to return the call came that the fish had escaped through the bottom of the net.  Of course I thought this was a wind-up but then the net was held up high to confirm the deadly truth – he was gone without being weighed and no photos would be taken.  The near brand new net had a 12inch hole in its base where Simon had attempted to lift the fish onto the bank only to see it slide away to safety.  Surely a 60inch net should be made to take the weight of a big fish, this one certainly was not so take heed when you look for such equipment.  The rest of the day passed quite pleasantly, I took another fish of 27lb, and the other lads caught more 20lb plus fish to a best of 27lb-11oz.  Lots of good sport, but I must wait for the next chance in November and hope one of those big fish put in another appearance – this time into a better landing net! 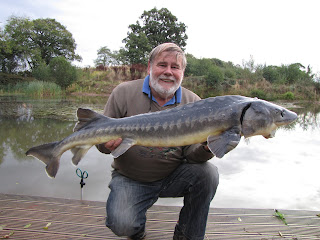 Nice specimen but not the target!
Posted by Travelling Man at Monday, October 10, 2011