After another blank session on the River Severn after zander, well, one take off an eel to be fair, I decided to try the Derwent again.  The weather is holding quite well, and those very high temperatures of a few weeks ago are just a distant memory that is better forgotten.  I arrived at the river early afternoon and found what looked to be perfect conditions for barbel fishing.  River up about one foot and falling, but a nice amount of colour rather than the tap water effect that has been the normal of late.  I had the usual array of bait, and started the session with the open-ended feeders loaded with a 50/50 mix of pellet and hemp that has produced so many barbel for me this season.  The hook-bait on the one-rod was a Monster Crab boilie, and on the other rod the bait was the usual 8mm pellet.

With five anglers spread out along the length of river I was fishing, it certainly suggested that everyone thought the fish would be on the munch, but the hours passed and the rod-tips did not move, either for me or them.  As dusk approached a couple of fish were landed and that at least gave hope, but it was just 15 minutes before my self-imposed deadline of 9.00pm before my rod indicated action.

This barbel had taken the well glugged boilie, plenty of flavour for the coloured river, and when landed it proved to be a nice fat barbel of 10lb-6oz.  If I was destined to only get one fish it is nice that it was a double.  I’ll be back soon on this river since I’m sure it should have fished better in those conditions. 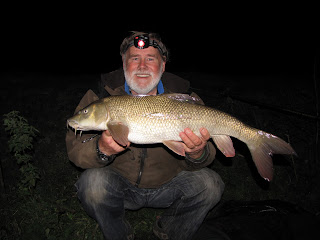