As with all normal fishing it has been a week of highs and lows for me, low on the fishing front, but a high on the entertainment side.  Following the great session on the Derwent last week it almost had to be downhill, and sure enough it was.  Early on in this week I went to the Severn after those big zander again, fished 2pm to 9pm with only a munched up end to a lamprey bait to show for the effort, probably an eel.
Mid-week I went to try a new sturgeon venue, it looks good but although I saw a sturgeon of about 10lb caught my result was a biteless few hours, those fish managed to ignore my meat and salmon offerings without any effort, but I'll be back to try there again.

Then a return trip to the Severn for the zander, but this time I edged my bets.  With the usual two rods in action I had one out with a small roach deadbait for zander, and the other was fishing with a monster crab boilie for the barbel.  The barbel rod won 1-0 with a fish of about 6lb.

Then came the highlight in that the annual Milton Keynes Specimen Group had their yearly function, this one to celebrate 25 years since they began.  With 80 or more like minded anglers it got a bit crowded by the time the guest speaker - Mick Brown - began his talk.  He opened with the comment that with so many anglers in the crowded into the room we had about 20 minutes of air left before we all lapsed into unconsciousness.  Fortunately although we did not need any central heating on, the air conditioning was just sufficient to keep us alive and attentive to the talk.


Mick talked us through a lifetime of dedicated angling where he managed that rare achievement of earning his living for the last 20 years from angling alone.  Many aspire to this, but very few succeed, and Mick did highlight the sacrifices made, as well as those many highlights he has had.  A very good talk with photographs of the highest quality to show off tremendous specimen fish. 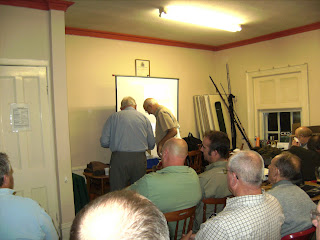 Mick signing books - The wide angle lens did not do justice to the crowded room.

Books sales went well, and you can get your copies from http://www.philsmithangling.co.uk/