A few day for tench and cats.

Another full week of fishing related bits with lots of exciting things to look forward to.  Monday saw me fishing for tench on a local lake, but with the rain and cold wind I experienced the blank that was almost expected.  Too many of these tench blanks of late, but it does seem that they are generally slow off the mark this year so hopefully things will improve.  With the fields covered in the yellow of rape and the woods giving a nice picture in blue with the bluebells out in numbers it is definately May - hopefully the weather and fish will act like it soon. 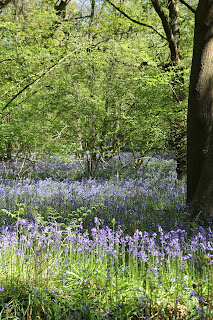 Tuesday was a bit of exploring with Mervyn Wilkinson where we went to look around a lake complex in the hope of finding potential waters to fish over the coming weeks and months – some interesting spots to check out further.


Wednesday I left for Orchid for a try at the catfish that live in the Club Lake on that complex, I was going to fish overnight and then leave quite early to continue down into the Reading area where I would meet up with John Found for a try at even more tench.  It looked as though by chance I had hit on a good time for the cats as Paul Scarrott and James Simpson had taken two fish each the previous night, Paul with two 30’s and James with two 40’s. 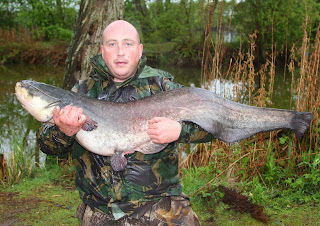 I was also lucky in that I got set up in the dry but before long the rain started again and then continued on and off throughout most of the night.  At 1:30am I got a take and after a great scrap landed a 34lb-4oz specimen, going round to Paul’s fishing peg [he was back again with James] I got him to take photos.  Not surprising he was a little reluctant as it was drizzling with rain and he was in his boxer shorts! 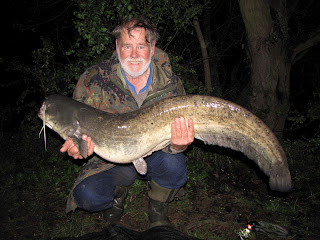 Life soon settled down again and my bite alarm woke me for a second time at 5:15am and I knew straight away that this was a better fish.  The catfish fight is powerful, slow and steady, unlike the sturgeon that race all over the lake.  This one took its time but slowly responded to the heavy pressure I put on him and finally he slipped into the net.   It was with some considerable difficulty I lifted him onto the weighing scales hanging on a hook placed into a nearby tree just for that purpose.  The reading came in at 41lb, very pleasing.  Again Paul did the honours with the camera and he has produced very good photos that did justice to the fish’s size.   James had also caught a 31lb fish in the night but Paul did not have any joy, perhaps he used his luck up the previous week with a pair of 40’s to his net.  Without a doubt if you want to catch a big catfish then Orchid offers an ideal chance, four 50lb fish are in there along with six 40’s though maybe some of these latest fish are last year’s 30’s moving up a size range, we can hope. 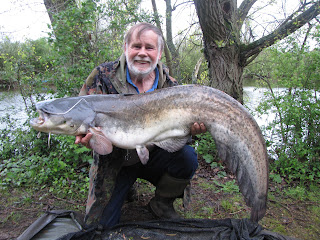 A happy lad went on his way to the Reading & District A.A.  venue that had been chosen for an experimental first ever night out under canvas for John in the hope of tench.  We had been fortunate in that last week’s Angling Times carried an advert for Fosters of Birmingham where they had an JRC Sti RS brolly camp at £119.99 an amazing deal and I brought two, one for John and one for myself.  My current Aqua camp was one of the first pram type camps on the market and is probably 10 year old, it cannot last forever and that peak front will be a blessing in the rain.


John was in his element putting the camp up for the first time but fortunately they are perhaps the most easily erected of all the different styles of camp on the market and we soon had both camps up and the fishing tackle in operation.  A feeder maggot rig on one rod and a straight forward boilie rig on a running lead on the other.  John had chosen Source boilies while I was going to give the new Dynamite Green Lip Mussel a try, the maggots fished close in where we found nine foot of water just a rod length out and the second rod with the boilie was fished out in the open water.


For the first twenty-four hours we began to wonder about the choice of venue since it appeared to be totally dead, not a twitch on the indicators and no sign of fish on the surface.  Early on in the second day we met Kevin, the head bailiff for the venue, and with him was the fisheries manager, Del, interesting chaps to talk to and a couple of hours were to pass while they gave encouraging information both on this venue and others covered by the Reading book.  We were assured the fish we hoped for were present since the venue record tench of 12lb-4oz had come out last season and it was hopefully just waiting to pounce on our baits.  Along with these there was also the chance of double figure bream and good eels that run to quite big sizes - the options looked good.


That evening we did get a lot of encouragement in the show of fish that would have numbered in the dozens.  We thought they were most likely tench but occasionally a definite carp would show head and shoulders so we hoped for a couple of hook ups just to see.  I got the bite on the boilie and bringing the fish in though obviously not big I looked forward to seeing what it was, and then it fell off – sod it!  John landed our only capture in a smallish carp but we will be back to check out that potential. 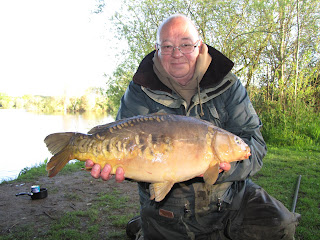 The only capture of the 48 hrs.

Last but not least we have the fact that John quite enjoyed the experience and he is going to keep the camp, I had told him he would sell it at that price no problem and he did get an offer on the bank should he have decided otherwise.