Amazing fish but not caught.

With little to report in the fish catching department I thought I would reflect on one of the more memorable occurrences that have happen to me over the years of fishing.  This event would have been in the early 1970’s and at the time I was fishing the River Cherwell almost every week for the large chub that were present.  That ‘large’ statement is relative since they would have not raised an eyebrow today being mostly in the 3lb to 4lb range.  You could fish a season and not get a 5lb chub but still class it as a good year, 4lb was the target and even that could be difficult.


The scene is set as on that autumn day as I wondered along the banks of the river at Shipton on Cherwell, a chub fisher’s paradise.  The nearside bank was lined with rushes that grew to three foot height and the far bank had the occasional tree or bush overhanging the water to give the chub a roof over their head.  I had fished this section of river on many occasions and at the time it had produced my personal best chub of 4lb-8oz, but a big surprise waiting just along the bank.


Leaning way over the river was a large elderberry tree with its branch dangled in the water.  Over time various rushes and other rubbish had built up on the branches to make a large weed raft in the shape of a teardrop, wide at the upstream end and tapering off at the tail end a known ideal spot for the chub to use as their home. 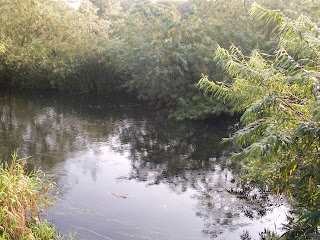 No raft, but chub love cover over their head.

The water was crystal clear and in the bright sunshine I could see an absolute monster chub holding position on the outside edge of the raft, six pound minimum and by far the largest chub I had ever seen.  My tackle comprised of a 10ft Glass Bruce and Walker Avon rod with a 1lb test curve, standard fair in those days.  The Mitchell 300 reel was loaded with 6lb line going to a size 2 hook which would carry my soft cheese paste out into the swim.  The flow was minimal so the weight was just a couple of swan shot pinched onto the line and that was all I needed.


I made the cast to land just behind the fish and it seemed to go perfect and I settled down to await the bite indication on the rod tip, I gave it plenty of time but when I finally looked I could see the fish had not moved.  Slowly reeling in I changed the bait to a couple large lobworms and carefully cast back out again.  This time the cast was far from perfect and the bait sailed over the tail of the raft to land on the opposite side from my position, without a doubt I could not retrieve that without spooking the fish, so I again settled back to wait, my fate in the fish’s hands so to speak.


Then I got the tap-tap of an interested fish and the strike was good as I felt the thump of the fish on the rod.  Carefully I played the fish into midstream where I could see I had hooked a perch that would be well on the way to the 2lb mark, normally pleasing but not this time.  I carried on reeling in and then realised there was a fish following the perch, thinking of pike and continued to reel until the chub was just the rod length out holding in the slight flow.


The fish that followed was of course the large chub and now he was just 6ft or 8ft away from me as he slowly made his way along between me and  the chub  up to the fishes head.  There I could clearly see the worm tail hanging from the perch’s mouth and it would seem the chub could see it as well!  He trundled up and calmly proceeded to take the tail of the worm from the perch and disappear back across the river never to be seen again.


A totally true account of what happened and quite an experience that stands high in those unusual encounters I’ve had.  It would be interesting to hear if you have an equally interesting story to relate.
Posted by Travelling Man at Friday, April 06, 2012

Email ThisBlogThis!Share to TwitterShare to FacebookShare to Pinterest
Labels: Chub