Raining again but still out trying.

With a very wet and windy Tuesday to Thursday session this week after bream that produced exactly nothing, obviously no fish to report so I thought I would continue the old memory theme I mentioned last time.


I will begin with this shot of my first motorbike – note the L plate – this was a BSA A7 500cc twin, a big and heavy bike to learn on.  During the period I was on L plates the national rules changed and I could no long ride a 500cc bike as a learner, the limit dropped to 250 cc and I had to borrow a relations 200cc Triumph Tiger Cub to take the test.  The difference in size was amazing and it seemed like a toy between the legs but as the women always say ‘size doesn’t matter,’ it did the job. 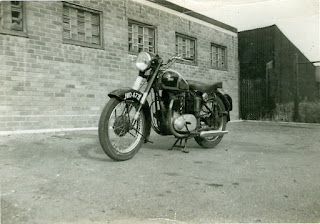 That was my first bike, and this is my last bike, a BSA 650cc twin Super Road Rocket.  This went like sh*t off a shovel and was my pride and joy for a couple of years.  A classic bike of its day and one of the two main contenders for top honours were this bike, and of course the Triumph Bonneville 650cc twin.  Modern bike are both bigger and faster but I took this to 117mph on the M1 and slowed down.  With the safety helmet of those days, if I turned my head it was difficult to bring it back at speed and you did need to as the general traffic was going relatively slowly making them appear  in front of you very quickly.  Today they would be going past you. 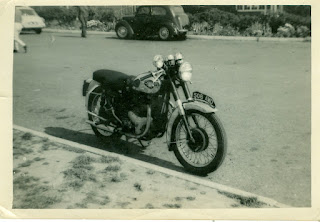 My Super Road Rocket.
My first car was again a modern day classic being an open top MG TC.  Again slow by modern standards not being capable of 100 mph, at least this one wasn’t, but it certainly turned heads.  The window screen wiper motor was positioned at the top of the screen on the left hand side of the car and when I took my first test it was raining.  The rain came under the soft top, onto the wiper motor and dropped onto the testers lap.  I failed that one! 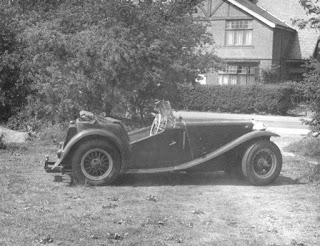 Over the next 47 years I’ve had many cars from most of the main manufacturers.  A 2.4 and 3.4 Jaguar [like Morse’s car] was amongst the more memorable, but probably the best to have had today from a collection point of view would be this Triumph Mayflower.  Very heavy build and slow, but again a classic of its day and well remembered. 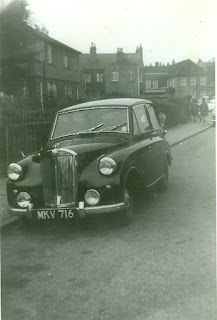