Today I should be on the banks of a southern lake trying for big sturgeon I’m told live there, but look outside and you will see why the trip was rearranged.  It’s a good job we are well into spring otherwise it could be really cold rather than just freezing!


Knowing today would be out for fishing I decided on a tench trip yesterday, still chilly but dry and with light winds, quite acceptable conditions.  I was not there for dawn [getting old] but not long afterwards saw me traipsing my tackle round the lake to the swim I had decided on, there was a few anglers already fishing but their reports suggested sport was slow.


I set my stall out to fish my two rods using different methods, one on a helicopter rig with maggot feeder in place, while the other rod would carry a free running, hair rigged, Dynamite Scopex Boilie.  Using the Spomb I baited both swims - kept well apart - with the appropriate feed, hemp and dead maggots on one, and mixed pellet with broken boilies on the other.  With all in place it was a case of the usual sit back and wait, but I did not need to wait too long.  Perhaps thirty minutes after starting I got my first tench of the 2012 season, not big a 4lb-15oz but being a male he did put up a spirited fight before coming to the welcoming net. 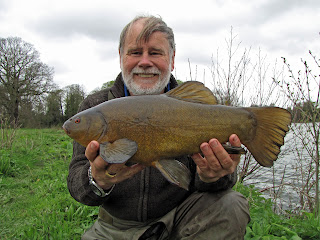 First of the season.

A pleasing start and I soon had the rig back out in place hopeful of more action though that took a little while to come.  By mid-morning I was beginning to wonder if the good start was a flash in the pan but then the bobbin on the maggot rod rose again and I was into another fish.  This tench was a clean 6lb plus female that did justice to the species, its little red eye glaring at me accusingly waiting to be returned to the folds of its watery home.  With two tench to maggot and none to the second rod I decided to change that one over to maggot as well but sport was not going to be hectic.  The rest of the session past quite nicely with another tench coming to the net followed by a tufty duck that had decided he liked my maggots. 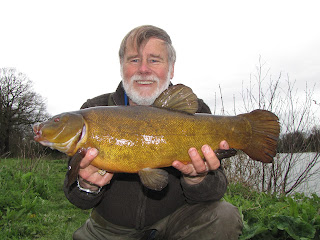 A blackbird, obviously with a family just over the lake had found a likely sucker that would let it feed on the maggots that were available by his feet.  It seems amazing how this bird could pick up so many maggots with its beak apparently already full.  If it dropped one of the maggots on the outside of the bait box he would go back and pick it up, then return to the food tray until he decided that he had enough for now.  By the end of my shift he had about as many maggots as the fish had been given, but he gave me some light entertainment to pass the waiting hours. 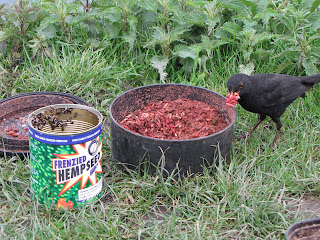