As part of the Barbel Societies Research & Conservation fund raising activity I offered a day’s guiding as I had done over the previous years.  I’m not too keen on the guiding system since I always worry that my client might catch the monster barbel I’m trying to catch myself.  After all if I do the guiding correctly then the only difference on the day is the he would be holding the rod instead of me.


Still after a delay in arranging a date due to what appeared to be a slow start to the season I finally arranged to meet Chris Childs on the Kennet for what I hoped would be a great day of sport.  Recently the river has been fishing very well with plenty of doubles amongst the numerous fish being caught.  My last visit just a few weeks ago resulted in seven fish to a best of a double; hopefully we could get similar results. 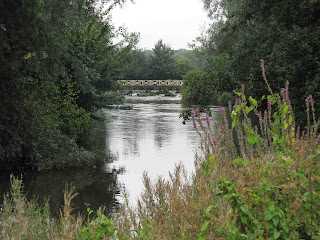 One of the many Kennet weirs.
The recent hot weather had been forecast to be coming to an end, but it was still hot and sunny here.  A couple of light showers meant we needed the umbrellas just to be on the safe side though all in all it was a nice day to be out fishing.  The method to be used was the caster/hemp bait and wait idea, this had been responsible for most of the catches I was aware of and with lots of doubles up to 13lb plus it was the proof I needed to use it.


We met in the car park at 7:00 am and by 7:30am I had done the initial bait drop of a dozen droppers of caster and a similar amount of hemp.  The swim was a classic; the flow from upstream had been thrown across the river directed under a long line of overhanging bushes.  These bushes were the cover for any fish moving up and down the river and all we needed to do was lay the table to intercept their route with some tasty morsels to cause them to stop their wandering. 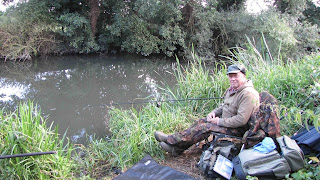 Chris settles in at the start of the day.
As you will probably be aware the name of the method explains the idea, it does what it says on the tin as the saying goes.  You bait, you wait, you bait again and you wait again.  This can be done as many times as you like, I would suggest that the method is only worthwhile if you have at least half of the day to fish and preferably all the day.  For this session I baited four times over a two hour period before a cast was made following the last of those four drops.  The later drops are only top up so they consist of less feed, for my purpose this meant four droppers of each, the caster and hemp.  Once the barbel arrive you can reduce the hemp since its main purpose is to attract the fish in the first place.  If the fishing slows down then increase the hemp element yet again in order to hopefully bring fish from downstream. 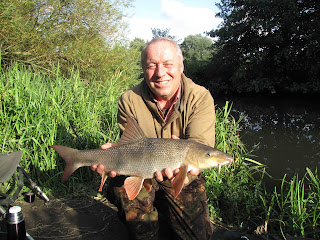 A Kennet first and obviously a pb.
The first cast was made and I advised Chris to hold the rod for a few minutes since quite often the take comes straight away, little did we realise what was to come.  The minutes passed without a take and things settled down to the waiting part on our side, minutes turned to hours and even though I kept the swim refreshed with drops of bait trickled in over the next hours no bites came.  We were well into the afternoon before a bite finally materialised and Chris was playing what was definately a powerful fish.  At one stage he had it directly in front of us, but it refused to come to the surface to let us get a look at its proportions.  Then it shot downstream again and the clutch begrudgingly gave line, at this stage there was no real concern, keep the rod low to avoid those overhanging branches and all would be ok, then the line went slack!  The fish was gone and the line had apparently just broke, new 12lb line loaded the previous evening.  Chris took it stoically but that was probably a new pb for him and just bad luck prevented him getting it.  He went on to land a smaller fish so at least he did not blank on a day where the fish did not respond as hoped.  I did find out the EA were power jetting the gravel beds upstream near the weir and just maybe that put the fish off although I don’t think so.  With an invite back from the fishery manager I’m sure arrangements will be made and Chris will get his hoped for double in the near future.


The following day I was back on the fishery, Chris had planned to stay the second day but family ill health stepped in and he had to return back home cutting his trip short.  For this day I followed exactly the same routine and initially I got exactly the same result.  Yet again it was mid-afternoon before I got a take and that resulted in a hard fighting barbel of 9lb-3oz.  After that, fish came at long intervals giving me a final catch of four barbel with that first fish still the largest.  My friend John Found had joined me for this day and although he only caught one barbel he seemed to have the knack of getting the big ones at the moment and a magnificent pristine 12lb fish joined his growing list of doubles this season.  The method was not shown in its best light over this trip but the other side of the coin was that nobody else that I asked over the two days even caught one fish. 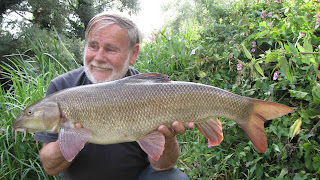 Best of four on the day. 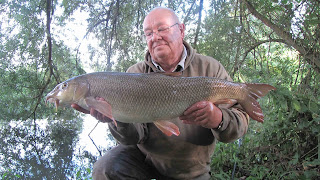