A nice brace of Nene barbel

My third return to the sturgeon water in pursuit of the 50lb fish known to be there saw me land three fish, two of 24lb plus and yet again the 42lb specimen took a fancy to my offering.  It seems that this fish is indeed a hungry type but there were several anglers who were trying without success to get him, perhaps he just likes me.  J 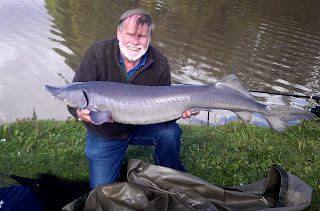 A phone call to Mark Smith, one of the Peterborough and District bailiffs, confirmed my thoughts that the River Nene was low, clear and very little water was flowing along the stretch to be fished.  As always the odd barbel was being caught, it was a struggle but that seems to be the case all over so I decided to at least try.  With those clear and low conditions Mark’s advice was for an early start and the alarm was set for 4am in order to allow me to be fishing by the 6am sort of time.

Along with the low conditions was the amount of weed still in place along the river’s length, this gives a problem both in spying the fish and in landing one if you are fortunate enough to hook your quarry.  In these conditions two factors come into play the most important of which is the tackle needs to be strong and the clutch set to give very little, if any line.  I would be using my normal choice of the Drennan Specialist Barbel rod at 12ft and 1.75lb test.  My main line is 12lb and the hooklink is a combo link of 15lb mono going to 15lb braid.  Using a knotless knot I then have a size 8 Drennan Continental Carp hook with a suitable hair to take whichever bait would be used on the day.  Knowing that a lot of pellet has been used on the length I had decided to use Elips pellets with a 10mm pre-drilled crab pellet has a change bait, both of which would be in the smaller sizes. 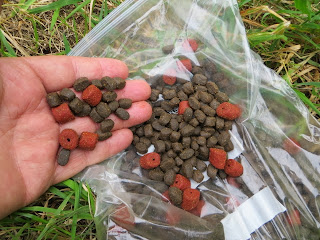 A few free offerings at a time is enough.

The rig used was a straight forward running leger with a two foot tail, two of the 6mm Elips were glued in place either side of the hair and with just half a dozen free offering introduced I made my first cast in the twilight of the morning.  The mist was still swirling round and indeed I had travelled through a few patches of its presence on my way up but that is not unusual for the autumn time of year.  It almost came as a surprise when the rod looped round in response to a barbel take, although I obviously hoped for a fish I’ve had enough blanks of late not to expect one.  Normally I use the baitrunner feature on the reel, but with the amount of weed, both cabbage and pipe stems, I thought it better to lock up tight and hold on.  The fish disagreed and did its best to tangle me in every bit of nearby cover, at one stage I was sure I would loose him as I could feel the heavy weed collecting on the line and with each little movement it got that bit heavier.  In the event I need not have been concerned and my prize finally came into the net along with a collection of different weeds to prove his worth.  If I had included the weed I would have got a far better weight than the 9lb-10oz that came up on the digitals but I’ve seen enough of that type of weighing of late so the weed was left on the bank. 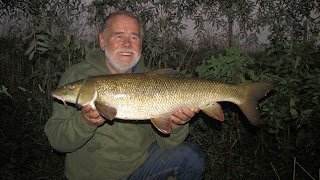 As the morning progressed the mist began to rise but the cloud cover stayed and while it was mild it was also quite a grey day though this would probably be an advantage to the fishing.  Anglers came and went; I had seen Mark earlier in the morning as he went about in his bailiff role.  This water is also available on day tickets but poachers and eastern Europeans are always a problem so a tight rein keeps the hassle to a minimum.  We talked for a little while and he had only just left when the crab pellet now in use was taken and yet again a great fight followed.  Once landed I called Mark and he quickly returned to see the fish and help with photos.  By now I already knew it was not the hoped for double but a near match to the first fish this one being 9lb-8oz.   The fight had been even more spectacular and this fooled me into thinking it was bigger than the first fish, but one look at the tail and I could easily see where it got the extra power to fool me.  With two such fish already netted I was hopeful of yet another, but as dusk approached I had a visit from the local otter and that I feel spoiled the chances of further fish so I packed up well pleased with the days result. 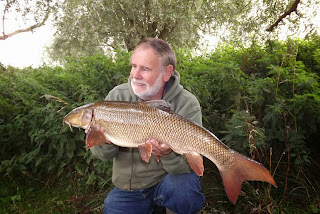 Second of the brace at 9lb-8oz.

In closing I would like to thank Mark’s wife who knowing I was on the fishery gave him a piece of her madeira cake to bring down when he returned following his lunch break, I don’t think too many anglers get that treat but she had recognised me as a true cake lover!
Posted by Travelling Man at Tuesday, September 24, 2013