A nice brace of specimens.

I have had a mixed spell of fishing results over the last week.  A return to the sturgeon lake saw me catch two fish, one of  41lb-14oz which was the same one as last week and a second of 22lb-4oz, a good day’s sport but I still have to try for the 50lb plus fish I’ve seen from there. 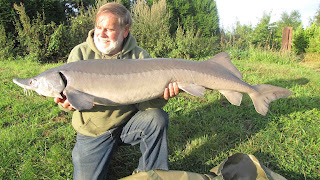 My next effort was 48 hours on the River Wye at Hereford, lots of small chub between 8oz and 3lb but the only barbel I hooked was lost when the braid section of my hooklink broke.  There seemed no reason for this but it was probably a nick taken as the fish bores around on the bed of the river.  I’ll be back there in my attempt to put a few extra ounces on my river best of exactly 10lb. 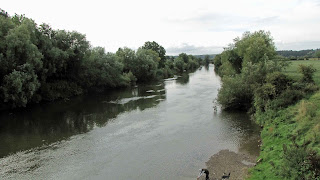 The River Wye near Hereford.

Now I decided on a trip to the local River Anker, an easy session since it is only 18 miles rather than the usual 50 miles or so.  My target was barbel, but all I got was quite a number of knocks off the chub, two different swims were fished but I got the same result.  These fish were not hooked by the simple idea of leaving quite a long hair with the bait a good 10mm clear of the bend of the hook, not a problem for the barbel, but chub rarely take the bait that far into the mouth.
With the rain we have been having I still thought the chances of the barbel would be good so I returned to the river yesterday for another attempt.  This time I shortened the hair to put the bait right onto the hook just to see what size chub were knocking, it turned out to be a good idea.  I still got a number of knocks off chub that did not take the bait far enough to be hooked, they are far cannier than barbel when inspecting and taking the bait offered, but at last one was hooked and at first I thought I had a small barbel.  The difference quickly became obvious as this fish sort out the sanctuary of nearby rushes and for a moment I thought he had made it as they bent over under the pressure I had on him but then he came clear and was mine.  As I drew him to the net I thought he looked quite big and at 5lb-12oz he certainly falls into the category for any midland river where 5lb is the normal target. 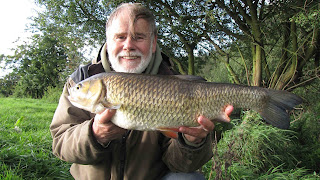 Less than thirty minutes later he was joined by an almost identical twin of 5lb-11oz, a well battered fish but with room to put on extra weight I’m sure either of these two specimens can make the 6lb mark later in the year.  Both fish fell to a boilie made up for me by a local manufacturer, Quality Baits.  I normally use the Dynamite range of product but they stopped producing the Monster Crab line and although I now use Source and Crave I still have a lot of confidence in the original boilie that put so many barbel on my hook in the past. 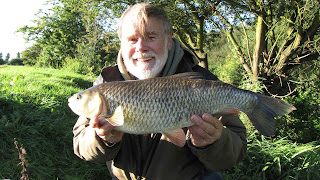 A battered warrior of 5lb-11oz.

Before the session ended I added yet another chub, but this one fell back into the usual range I expect and when weighed he sent the scales to 4lb-5oz, a nice ending to a successful day.
Posted by Travelling Man at Thursday, September 19, 2013