Monster eels - the highs and lows of their capture.

With this current heat wave and the long awaited arrival of a ticket for an intended eel fishing venue I though the Gods of Angling were sending a message, get out after those eels Phil!  One advantage of this intended session is that it was just overnight and I could avoid being out in this blazing sun through the day.  I left home late in the evening in order to arrive about 8:00pm, plenty of time to set up since the rods and rigs were already prepared and just needed to be unfolded.  I would be using simple rigs with a free running lead to present either worm or fish heads as bait.


Since this would be my first visit to the venue I chose the swim purely on its comfort, I could park my van behind  position and sit in the side doorway just waiting for action.  I started with worm on each of two rods and a fish head on the third, the worms would also have an additional pva bag of maggots just hung on the hook as an extra attraction to any passing eels. 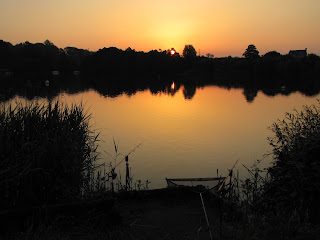 Eel time on a new venue.
Once it got dark the swim came alive and the worm rods gave lots of indications of fish being present, mostly just one or two bleeps but on several occasions the line just screamed out and I struck into nothing.  Then just after midnight I struck an indication and this time the rod buckled over with a fish hooked.  At first I thought it would be small, just that typical shudder that comes from the eel as it swims backward with its undulating action.  Then as it came more right in front of me it decided not to come and I felt the full power of a big eel, exciting does not do it justice.  I was using a 50 inch landing net, but even that was too small and I had one hell of a game getting it to go in and stay in.  I had forgotten just how active a big eel can be and this was to prove disastrous later in the session.  With only the smallest amount of its tail still over the drawstring it was back out of the net and I was fortunate not to foul of the hook as the head went back out.  Eventually I succeeded and I was certainly glad of the heavy tackle being used, 15lb main line and more like 80lb braid hooklink to a size 4 hook.


I got the eel into a zip up sack having zeroed the scales before doing so and the weight showed I had caught my target fish with the first one off the water, 6lb-4oz my sixth over that magic 6lb weight and I hope for the 7lb specimen over the next season or two.  My intent was never to try to get photos in the dark and I placed the sack safely into the water checking the eel could move freely within it.


The rest of the dark hours passed quite quickly and the adrenalin kept me awake without any effort.  Then as dawn came the same rod went again and this time I landed a good eel of 4lb-3oz which I just unhooked and weighed, then I  left him in the landing net to wait the hour or so before the light would be ok for photos.


In the 1970’s when I last made a serious assault on eels I had found out about a treatment as used by the fishery people at Liverpool university to calm fish whilst they did their study work.  It is called Sandos MS222 and a small amount is dissolved into water and the fish is then immersed into the mix.  This does indeed have an amazing effect of making the eel easy to handle and once returned to fresh water they quickly recover and swim off.   Since the packet I have has an expiry date of early 2012 I thought I would check if it still had the required effect on the smaller eel first and it did.  I got the photos and measurements 37”X8” and put the eel back in the landing net to recover. 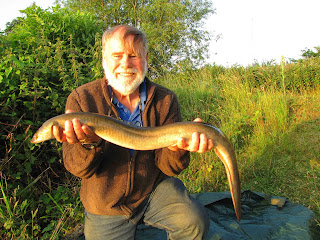 I had prepared the mix and checked the effect on the eel at the top of the bank away from the water, but once that was done I took it down to the water’s edge to take the photos.  Now I lifted the bigger eel out of the water and placed him into the mix while still in the sack.  Having allowed what I thought was enough time I unzipped the sack and tipped him into the bin I was using but then disaster!  The mix had not worked enough to disable him and with his tail just over the edge towards the water I was as in the blink of an eye he quickly disappeared back out of the bin and into the nearby water’s edge.  I stood the dumbfounded and cursed how I could have been as stupid as to play with a big eel near the water.  I have the satisfaction of having landed him and at least I got the weight, but no photos or measurements I will have to catch another one for that.


I returned the following night but it was chalk and cheese, a few twitches and I moved swims about 11:30pm but no real action, maybe next time.