Barbel days in the sun

Following the high point of landing that 12lb tench last week, I took a few days off where normally I would have gone fishing.  I just did not feel that urge to travel to any of the many venues that came to mind so a short break was in order.  After almost a week though I needed to get out so a trip to the Warwickshire Avon was in quickly planned and I went to a swim that has previously been kind to me in the past.  This was only ever going to be a short session, arrive about 2pm gone by 7pm, but if the god’s smile that can be enough to get a fish, and if they don’t then it’s nice to be out.


At this time of the year one of the problems is the weed and in this swim it’s even worse than is often the case.  The that the nearside half of the river is full of cabbage type weeds, quite unforgiving to tackle and playing a fish carefully.  Just one rod today, my trusty Drennan 12ft 1.75lb Specialist loaded with a Shimano 5000RE carrying 12lb line.  Hook link is as usually used, 10 inch of 15lb Pro Gold with 4 inch of braid to a size 8 Drennan Continental Carp hook.  Hookbait on this occasion is a couple of Elips pellets glued either side of the hair rig and a swimfeeder loaded with my usual mixed pellets dampened down with liberal amounts of hemp.


With the sun blazing down now that summer has arrived for a brief stay I sat there waiting for a sign of fish being present.  This time, as so often the case, there was no previous sign of fish just a screaming reel as the fish took off with my bait in its mouth.  With the conditions in the swim I knew it would be a hit and hold job, but even then there were moments over the next five minutes where I was convinced the fish would be lost.  The tackle would go solid and no amount of pulling seem to make any difference, but I opened the bail arm and waited and although there seemed no difference and no line was taken, when I tried again he came free and moved onto the next piece of cabbage that took his fancy.  This happened three or four times, but then he obviously weaken and came more towards the surface where constant pressure kept him coming to the waiting net. 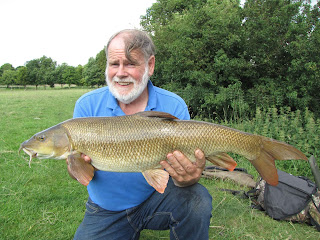 I left him resting for several minutes before I attempted to remove the hook and weigh him eventually getting a very pleasing figure of 10lb-2oz for my first barbel of the new season.  Back in the water for a short break, then two photos and before being released to swim away into the cabbage cover.


The next day I was on my way to Peterborough where a very helpful bailiff had agreed to show me the location of various venues.  It does seem amazing how often clubs assume the travelling angler is familiar with local landmarks to identify their waters.  This was such a case and the written word in the club book gave very few clues to my distant brain, fortunately Mark Smith soon sorted that out and took me all over the club’s waters so I would find as many different venues as I could possibly want.


That took the best part of four hours and whilst Mark went home with my grateful thanks I got down to returning to one of the sections to at least make a start in my search for a River Nene double figure barbel.  The sun was even hotter than the previous day and I thought my chances would be limited.  Still it was nice to be out and the stinging nettles right next to me held a pleasant surprise in the form of lots of dark, hairy caterpillars that would eventually turn into the beautiful peacock butterfly.  Dragonflies and damsel flies were out in force along with a pair of young crows that screamed for food almost continuously from the opposite bank of the river.  It is often said that there is more to fishing than just catching fish and sitting in the sun I could only endorse the statement. 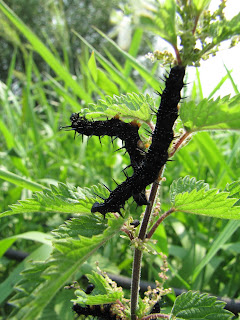 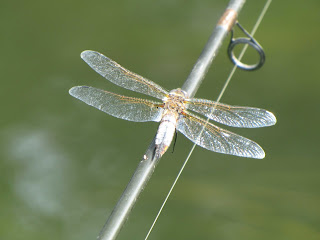 A mighty preditor of the insect world. 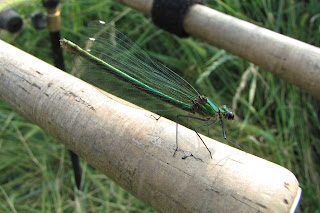 A delicate beauty on a sunny day.


I did not get the hoped for first barbel off this river, that will have to wait for another day, but I had a small chub of about 1lb taken by a pike about 5lb.  He obviously thought the chub was his and at first he refused to let go, it was some minutes of shaking the rod before he conceded his loss and swam off.  Other that bit of excitement I just had a spawned out bream of 5lb-14oz before I packed up at 9pm to made my way home quite pleased with the way the day had gone and looking forward to the next visit. 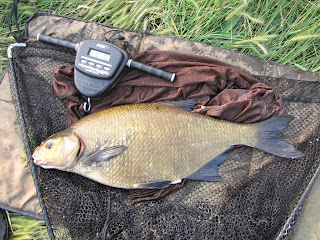