When I paid a fair amount of money to join a carp syndicate to fish for eels it was a bit of a gamble as I had only one report of eels being caught in error and that is not really a good sample.  Of course as regular readers of this blog will know it was proven a good decision on my first visit with eels of 6lb-4oz and 4lb-3oz being caught, even though I did balls up the photos big time.  Following that night I began to wonder whether it was a flash in the pan since the next nine nights only produced two eels in the 2lb range and those are almost of bootlace standard.  Then I returned last night!


I had slipped whilst descending the stairs while bringing tackle down for this eel session, for a time I wondered whether to go since my back was giving me quite a bit of agro, but in the end I decided it would hurt either at home or fishing so I left for the lake.  My eel fishing has been quite social in that I arrive at the venue about 8:30pm and can be set up fishing by 9:15pm well in time for the dusk to descend and the eels to begin their nightly wandering.  With the very hot weather we have had this was far more comfortable than fishing through the day and melting in the sun.   I decided to fish the same swim as the previous night since it was the most convenient to fish from the van, normally I would try a different area but the back said make it easy so this swim it was.   I park the van right next to the lake and have one rod directly in front of my position and then a rod about six yards or so either side of that.  Previously I had been fishing the margins and this time I had decided to fish just little bit further out into the lake, perhaps 15 yards or so.  At the same time I increased the length of the hook link to about 3ft and dropped the hook size down to a size 6.  These changes were an attempt to try and beat the missed runs that had been happen with all too frequent regularity.  With two good size lobworms on each rig I soon had the baits out and it was just a case of waiting which fortunately did not take too long.  I got a good run and struck into a fish, unfortunately it was a little perch which I had thought would have been responsible for many of the daylight indications, but now we went into proper darkness and the next run I struck into something much stronger.


Eels have a very distinctive fight where they pull and then you get what can only be described as a shudder where I believe they are trying to swim backwards away from the angler.  It is also an indication of their fight that they rarely kite to either side during the fight, just straight towards you or directly away from your position.  This fish was classic and after a nice scrap I could see the eel undulating in the torch light and I could see it was a very good fish.  I know from previous experience that it is very easy to overestimate the size of an eel while it is still in the water, both the dorsal and anal fins are extended and this increases its appearance quite considerably but I had allowed for this and it was big.  The next worry is the size of the landing net though at 50 inch it did prove satisfactory and the eel was soon engulfed in its folds. 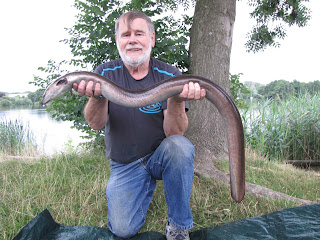 45" long and 5lb-10oz in weight, happy days
I lifted the fish out of the water and took it well away from the water; this one was definitely not going to escape.  The hook was placed right at the front of his jaw and could be removed with any effort, if it had been out of sight I would cut the line as close as possible since it does not help to muck about with eels too much as many of the organs are towards the head end of their body and can easily be damaged.   The weight came in at 5lb-10oz and when measured later on it showed figures of 45inch long and 8.25inch girth.  This made it the longest eel I have caught although the girth is well down on the largest which went gave 10.75inch for one of my sixes. 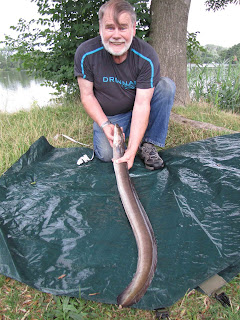 Second of the night at 4lb-9oz
Already a great night’s reward but an hour later I was playing another eel the proved to be 4lb-9oz and 39” x 8.25” and a terrific follow up.  The time was now about midnight and nothing happened until just after 2am when yet again I played and landed an eel of 4lb-2oz with dimensions of  38” X 8.0.“ 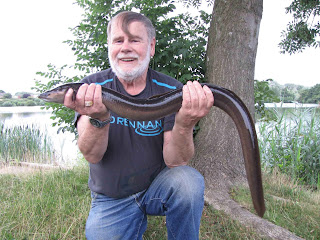 Last of the three at 4lb-2oz.
With the many twitches and false runs I had there was very little sleep this night and when Baz Fisher came round to help with the photos I was well ready to leave and get a few hours in bed knowing the dreams would be of even bigger eels I hope are waiting to be caught over the coming weeks.
Posted by Travelling Man at Wednesday, July 31, 2013

Email ThisBlogThis!Share to TwitterShare to FacebookShare to Pinterest
Labels: eels