The recent pike fishing session on Chew really set my mind going on the toothy predators, even in this cold snap they will still feed so after a day to sort out life’s needs I was on my way to a local pike venue.  This was Saturday morning and at 6:00am it was already spitting with sleet that changed to snow before I reached the venue.  The tactics I would use could not be simpler, a straight running leger using a fairly light lead and either sardine or mackerel on a Jardine type snap tackle – for the younger reader that is the usual two treble hooks in a line with each other.  J

Wrapped up well against the cold and wet I waited for my first indication, and as I waited the snow began to slowly settle laying the usual white blanket over the surrounding ground to give that uniform appear that loses all the countryside’s normal character.  The first take was missed, but almost straight away after I recast I had another and assumed it was the same fish.  At 4lb or so it would not set the angling world buzzing, but I took a photo of it lying on the floor just because of the small amount of snow that lay there.  Another pike followed, this one slightly bigger at perhaps 6lb, and again the next fish got larger still so out of interest I weighed it, not had much practice at that this year, 7lb-12oz and a nice scrap, but it proved to be the last action for the day. 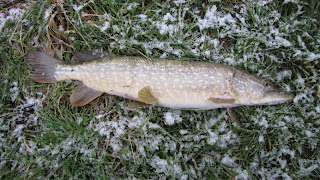 The first of the day.

The forecast for Sunday suggested light rain in the daytime with snow starting as evening drew closer, the wind would turn to the east and then the snow would continue through the night.  I decided to make the best use of the conditions and go back again for a dawn start fishing through to mid-afternoon.  This time as I left home it was raining and in fact it did not stop all the time I was fishing, but that’s what we have umbrellas for.  I would be using the same tactics but had moved to the opposite end of the water in the hope the big fish would show there.  Throughout the morning I had indications and lost a fish through an unusual occurrence.  I struck a positive take and the rod bent well over into the usual battle curve, more pressure got it moving but then it went comparatively slack.  Cursing a lost fish I reeled in against some resistance and when the end tackle appeared it was heavily covered with blanket weed.  My guess was the hooked fish run along the bottom into a bed of this blanket and with the extra weight right next to the hooked fish it pulled the hooks free, just bad luck.  It was coming up to midday when I finally managed to hook and land a fish after a great fight right to the drawstring, as it slipped over I knew I had my hoped for 20lb+ pike, but how much over?  I removed the hooks, just lightly nicked in the scissors, and then left her in the landing net to rest as I got the gear ready.  Fortunately just ten minutes before I landed the fish, a friend, David McIntyre had arrived just for a look around, with the steady rain still falling it made getting photos so much more easily accomplished and soon the fish was heading back into its watery home.  The weight at 22lb-11oz was of course very pleasing and I continued fishing very hopeful of another fish before I left. 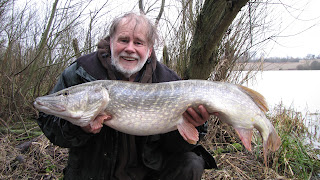 The confidence of more fish was rewarded when I followed the twenty pound pike with another long lean fish of 16lb, this being a totally different shape to the near 16 from Chew but that is probably to be expected, these live on roach and the like where as trout fishery pike can supplement their diet with those trout along with the usual coarse fish.  That fish was the last one of the session and I left before the predicted snow arrived well happy with the result for two days effort. 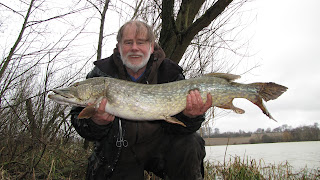 A narrow 16lb fish to follow up the big one.