The weather often dictates just what species of fish we try to catch at this time of the season, rarely hot, but often freezing it limits the chances of catching probably half the species available.  Of course there is always the maxim of that if you have bait in the water you have a chance, but life is not long enough and available time not sufficient to work on that idea too much.  Now was such a time, the temperatures had fallen to the 1C or 2C levels with heavy overnight frosts, possibly chub, grayling, perch and pike would top my list of target fish and after thought I decided on the pike.  Just a few days ago I wrote about a 22lb-11oz pike caught on a local water, I knew there were others of that sort of size on the venue so I would return on Wednesday morning to try my luck.  The previous morning had been a quite heavy frost, and the view out of the window looked more like it had been snowing so heavily had the frost blanketed every around; as the dawn light came up over the water I could see that this morning was not so bad though my fingers still felt like icicles with the temperature below freezing.  Today I would be legering two sardine baits, a very good choice that accounts for many pike and has the advantage of coming off the hooks very easily upon the strike, this fact therefore giving good hook hold potential.  All too often I see lads using mackerel and only giving a half-hearted strike that would not set the hooks at all.  The pike has the bait clamped in its jaws and the hook hold in mackerel is something fierce such that the strike just moves the pikes head and does not dislodge the hooks.  You see the strength of this point quite often when at the end of the session you struggle to get the hooks out of your bait, the strike has to move the bait to get the best result so strike hard, and if needed more than once. 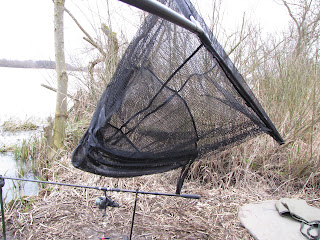 
This morning the wind was coming from the East and over the course of the session it turned towards the north but it stayed cold throughout that time, even at 2:00pm my wet net would hold out stiff to the side, frozen in place.  It had become wet when I netted the first of two pike from the highly coloured water, I had thought it would be a good fish from the fight and I was not to be disappointed.  Weighing 20lb-12oz it was long and lean, I did wonder just how big this would have been if it had been caught from the chew waters I fished a few weeks previously, those fish were probably twice as deep and this would easily have gone over 30lb.  Of course I’m on local waters and 30lb fish are extremely rare, even the twenties are not the common so with this being the second over that weight in eleven days I was suitably pleased. 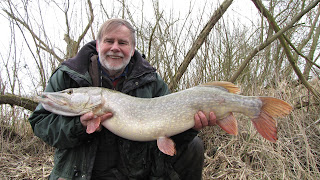 
I was going to finish at 2:00pm but another low double figure fish caused me to stay for a further hour, how often have you been lulled into this extra time in such a circumstance, we live in hope and as mentioned at the start of this piece, while a bait is in the water you can catch. There were no more fish but I retired well happy and looking forward to the next visit.  Perhaps a note worth repeating is that fact that the water was very heavily coloured, next time you arrive at a venue and see such a state of condition, don’t worry since the fish detect by smell and our baits give off plenty of signals to the searching fish especially if additional oils have been used as I had on this trip.  A simple small number of tiny nicks into the skin and the use of a hypodermic will allow any of the oils to be inserted under the skin to leak out as an attractor perhaps increasing your chances of success. 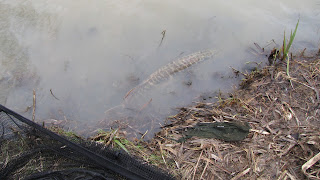 Double waiting to leave after being unhooked.


Tight lines until my next blog.