A 3lb grayling is a worthy target fish and with a personal best of 2lb-13oz that has been on my radar in recent times.  Plans had been made and a couple of potential venues sorted out with phone calls to local tackle shops and angling clubs, all I needed was suitable conditions.  Probably this winter would rank very high in the top ten of times when those conditions were at a premium, cold is not a problem but floods are and there seems to have been one continuous flood since last October.  With time running out I wanted to make an extra effort, I leave for Guyana on the 27th of this month so once the forecast looked good I was up for it.  The first trip would be to the River Taff in south Wales, a river known to hold big grayling and in fact there have been occasions where the grayling championships have been held there.  Over the years there have been reports of 4lb plus specimens although most, if not all of these fall to the fly fishers that frequent the river.  It is not a long river but with a catchment area of the Welsh Mountains it comes as no surprize that it also a spate river, very fast to rise into flood, but dropping back to acceptable levels just as quickly.  With no rain for four days or more I knew the river would be at normal level so come Monday morning I set out with a bucket of Lane’s maggots, a feeder rod and a float rod; let us see what is waiting for me in the upper reaches of the river.


The local tackle shop was as on most occasions very helpful, though thank goodness for the Tom-Tom since it would have been difficult to find in the middle of a built up area on an industrial estate.  I got the day ticket and directions to the stretch and set off.  He had explained that maggot fishing was not the normal method in the area, and although frowned on it was ignored to all intents and purpose, I was to see why as the trip unfolded.


The first problem that hit me was finding somewhere to fish; it seems an easy option but not here.  The river runs mile after mile though built up areas and the steep banks reminiscent of the height of the Teme are to a large extent lined with brick or concrete against possible erosion.  The few areas I did find where it was possible to go to the bottom of the bank were mostly very shallow, fast and the bed of the river covered with pebbles and boulders that would make it a tackle nightmare.  Too shallow to float fish, too snaggy to ledger, I was nearly on my way home already.  That decision was delayed when I found a sort section that offered a small length of back eddy by a weir and a few hundred yards of slower and deeper water above it where I could access the bank, at least I could fish. 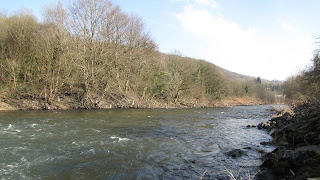 Accesable bank but shallow and snaggy.

I began with the maggot feeder in the weir, but although it was not quite as bad as just a few yards below there were still plenty of snags and after the capture of three bullheads and a few lots of lots tackle I decided to move above the weir into that deeper water.  I could not see into the depths, but there was no reason to expect that this section would have a different river bed to that where I could see so legering was out, trotting was the only way to fish this river. 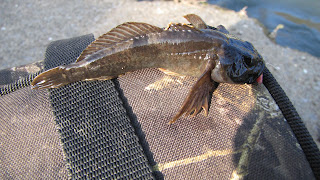 Only ounces but just imagine if it went 50lb.

With shallows above my position and the weir below I had little choice as to where to fish, maybe two hundred yards of bank.  Positioning myself about halfway I began to just catapult a few maggots out into the stream at regular intervals, I enjoyed a cup of tea whilst doing so since once I began to fish the chances for tea would be less.  After twenty minutes of this I began fishing and by slowly raising the float I found a depth of maybe three and half feet, a nice pace and an upstream wind, perfect for my level of ability.  After just a few trots through the float dipped and I was playing a fish that kept deep, I could only hope it was a grayling but when it surfaced it proved to be a trout of about 1.5lb, beautifully marked but the wrong species.  Trot after trot was completed but without result, those few maggots were constantly being trickled in, but the fish density was not the same as the River Test where by now I would be catching every trot through.  Another trout of similar size was taken and as the evening drew near I finally got my grayling, at about 1lb it was not the target but at least I caught one. 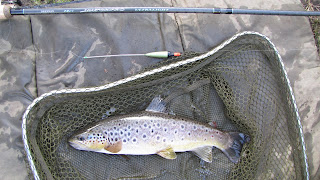 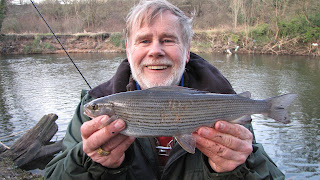 My grayling prize.
I had arranged to stay for two days, but following the comments of a couple of lads that were spinning along the length I went to look at a section a few miles further downstream.  They had suggested that where I was not noted for grayling by the fly fishers but they gave direction for a section further down.  I went after dark but being a built up area I could easily see the banks and river not that it helped.  Again sheer banks more reminiscent of a culvert than a natural river was all I could find in more than a mile of bank that I followed.  Add to this I could see the broken water that strongly suggested it was very shallow and thinks did not look good.  With chest waders the fly angler could go out into those shallows that were accessible and fish away, I’m sure there will be coarse fishing for the grayling somewhere on this river where big specimens can be caught but I failed in my attempt to find them and at getting on for 8.00pm I decided to come home beaten this time but there is always the next time.