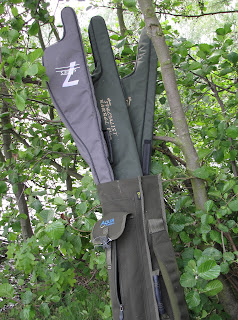 So off I went for my first major attack on the tench water that has produced my two doubles to date.  I leave on the evening of the Wednesday because I don't like getting up early and If I wanted to be there for dawn I would be up a 2:30am - not good.   I sometimes arrive in the dark and set up rods etc, and the camp, before getting my head down, it still seems better to rise and cast out new bait then get back in the bag.

I had just one small male  [4lb] during the night and with a 15mm boilie on one rod and an 18mm on the other the thigs went pretty well to plan, at least so far along the way.  Smaller tench had become a problem and I had gone onto the 18mm boilies to reduce the attention from those smaller fish, say the 3lb-4lb sort of size.  If that size is all you have available then by all means fish for them and be happy with their capture, I was hoping for bigger game.

Problem seemed that at the moment the bigger fish are not cooperating.  Local lads who have become good friends over the last three years are reporting the big fish are missing.  This is a worry since the lake did freeze over for several weeks and these fish could well be old in tench terms.  Eights and nines are being caught and there is room for these to expand but they will not get to the 11lb and 12lb sizes that were taken last year. 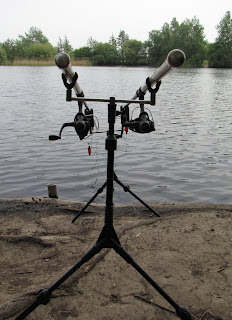 I went through that first day pretty well as I would hope.  Every so often a group of tench would come into the area and I would catch one or two, mostly on the 15mm boilie.  Top up each swim with a dozen or so fresh boilies and sit back to wait again.  Not a problem with the sun shining and my first cuckoo of the year blazing away trying to attract a mate.  Lots of fish but all under the 6lb mark where I start to weight them, then I got a better sample at 6lb-7oz soon followed by a 6lb-11oz belter. 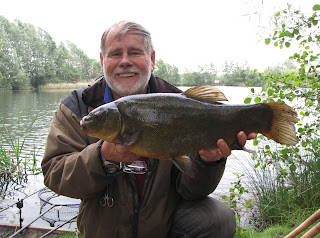 I ended the day with 13 tench, pleasing in number but I had hoped for a bigger fish at the top end but that's what keeps us going - hope. 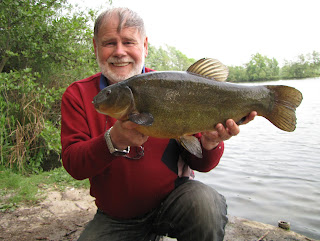 Yet again the night produced a single small male and I was looking forward to another days sport, but how the mighty are fallen.  Day break and I put out fresh baits and topped up the swims.  Then I waited, and waited and waited yet longer.  Come 10am and I knew that something had changed, no-one was catching and where as the previous day the lake had been a hive of activity today was dead.  I did get one fish, a male of about 5lb but what a disappointment.  Nobody had an answer, least of all me but  as I've said many times ' my book of 100 reasons why I blanked' will be a best seller.
Posted by Travelling Man at Friday, May 06, 2011