So it is 3:30am and I'm on the first of two pick-ups for the trip down to Marsh Farm.  With a 2.5 hrs journey it is fortunate that the three of us have plenty to talk about and the trip goes by like a flash.  Turn into the site and we are one of the first anglers to arrive, good that it gives us lots of choice of swims but we don't know where is fishing so not so good.

I chose a swim that has produced lots of crucians for me in previous seasons and just hope it will come up trumps again.  Indeed things looked good when I landed a fish of exactly 2lb just after 7:00am, but little did I know what was coming. 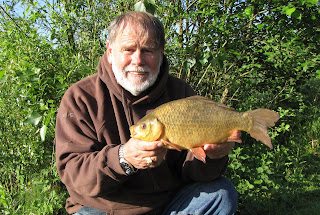 I look at crucian fishing as a chance to relax, I've caught enough big ones for it not to be too important to catch another, although the hope is obviously there.  To this end I always float fish for them even though I know that method feeder is probably a more efficient method in their capture.  A small, fine topped float and a range of soft pellets and sweet corn will complete my attack.  I have a small bucket of mixed fine pellet just to add a little bed of extra attraction, little and often being the mantra. 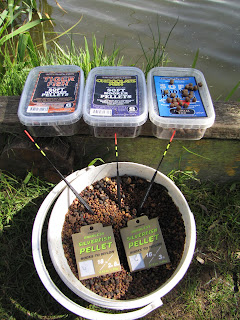 After that great start I was hopeful for a few more but the hours passed and the lake appeared to die.  Just one angler seemed to break the mould but I'll leave Jeff to tell his own story.  One thing is very apparent Marsh Farm is not the venue it was two or three years ago.  At this time of the year I would expect a good number of 3lb's to be showing, of the several fish that were caught that I know of they all fell between 1lb-14oz and 2lb-5oz.  Great fishing and still a venue that can produce a 4lb plus crucian, that said it can also produce a blank more easily than previously the case.
Posted by Travelling Man at Wednesday, May 11, 2011