At last the day arrived and the long awaited trip to the South American country of Guyana was about to begin.  There would be three of us fishing and I travelled down to Joe Taylor’s house in Bicester the night before in order to be ready for the 4.30am pick up by Andy Wornham.  We would then travel down to Gatwick for a 9.10am flight on Virgin Atlantic 747 to the Barbados.  On previous trips around the world with Joe we have always given plenty of extra time to cover the unforeseen and on this trip the unexpected was waiting on the doorstep.  As we went along the main road out of Bicester towards the M40 a fire engine went past and Joe remarked on that being unusual since another region would normally of dealt with problems in that direction.  Having lost sight of it by the time we reached the motorway we turned south on to the M40 and then we could clearly see it a mile or so further along the road from us.  We had travelled quite a way along the motorway before the signs of trouble appeared and before too much longer we came to a resounding stop!
Since we were quite near to the front of the queue I got out of the car and walked along to the front to speak to the yellow coated official there, he told me I was already the fourth to ask about the delay with people heading for airports.  The problem was a car smash and they needed to cut people out of the vehicles so no estimate of the delay could be given.  Thirty minutes passed, forty-five and then the hour had passed and it was getting critical to be able to meet the various deadlines that apply to airports and signing in before the gates close one hour before the flight.  Then there was a sign of movement and at last one lane on the inside was opened.  Ten minutes earlier and we could have still been stopped, but fifteen minutes later and we could have been some considerable distance back in the queue, they build up quick on motorways.  With just one lane open we got through fairly quickly considering the problem and made it in time to the airport.  Further back would definitely give us problems and probably have caused us to miss the flight. 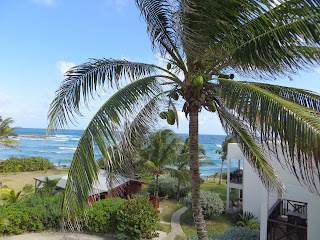 Veiw from the hotel room over the Caribbean Sea


There were no suitable direct flights England to Georgetown Guyana so it needed a stop via Barbados and some eight hours after take-off we landed in the Caribbean paradise.   We went through customs check with little delay and a short taxi ride later saw us arrive at the Ocean Spray apartments with a lot of hours to kill.  A short time ago the next flight via Liat Airways to Guyana had an evening flight that could be caught on the same day as our arrival in Barbados, that had been cancelled and now we had to wait until early afternoon the following day to make the connection, that said there are worse places to pass a few hours. 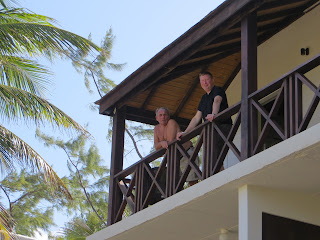 Joe & Andy admire the veiw from the balcony. 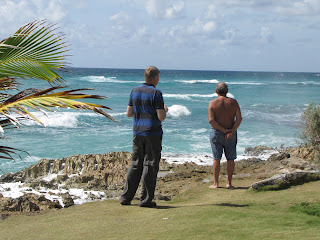 Watching the turtles just off shore. 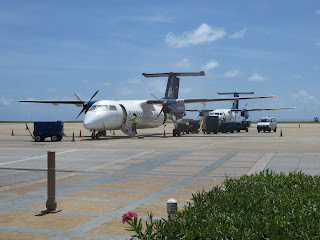 
Yet again we allowed plenty of time for the afternoon flight on a little twin prop plane and following a couple of hours in the air we arrived in Georgetown the capital of the country.  Travelling through the town gave an impression of chaos and poverty, lots of traffic that seemed to ignore the fact the other cars, bikes, people and even several cows that did at least stay on the pavement, were within inches of being hit all the time.  We stopped off at the money exchange building and got a large pile of Guyana dollars.  Their largest note is 1000 Guyana dollars and with an exchange rate of over 300 dollars to the pound that means it is worth about £3.  There was one hell of a lot of notes in the thousands of pounds we exchanged, fortunately they used a money counting machine or else we would have been there all day!  A little time later we were in place in the hotel, the view was not as good as Barbados but the rooms were air conditioned and comfortable so again we waited. 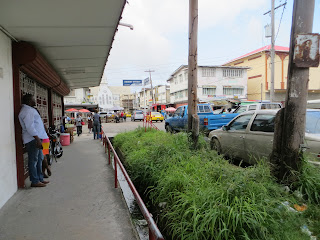 Outside the exchange in Georgetown 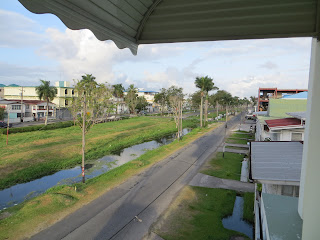 Veiw from bacony -not quite the same.

The next stage of our journey was into the interior via the main road through Guyana to Brazil, you build up a picture of what such a road would be line, motorway class, maybe A road or even B road, maybe a few potholes but it is the main road after all so it will not be too bad.  Wrong, it is next to hell; Joe in fact calls it ‘the road to hell’.  We would be on the road for about 8 hours minimum and often if will be much longer than this due to almost regular breakdowns, more of that later.  The first two hours were not too bad being on a tarmac type surface but then that ends and the rest of the trip is done on a surface of something like compacted red shale.  This is through a rain forest and as the name suggests, it rains and in the process the road is washed into gully’s and ruts that have to be seen to be believed, don’t forget this is the main road.  One of the main lorrys on the road is an ex-army Bedford truck of about the 1970’s, exported out here in large numbers they are used to transport goods into the interior.  For us it was a dusty trip since we missed any appreciable amounts of rain, but Joe mentioned a previous trip when it had rained and everything go covered in red mud, at least we got to the destination without mishap so not too many complaints. 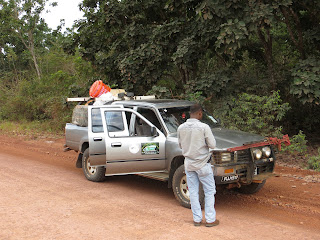 Our transport on the red road. 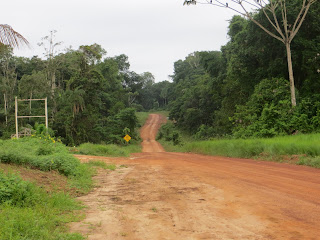 The red road in all its glory. 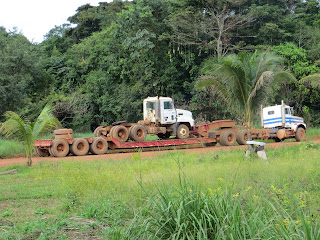 Transport on the red road. 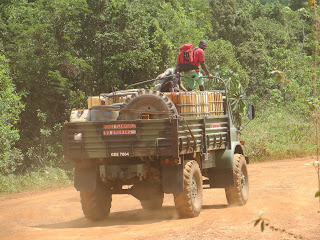 One of the Bedford trucks.

We had arrived at a very small settlement of a few buildings [if you wish to call them such] by the name of Kurupukari, which is one side of the River Essequibo that we had travelled all his way to fish.  There is a village on the other side and a river ferry runs between the hours of 6am and 6pm, miss those times and you wait for the next day.  It was too late and dangerous to go on the river with a number of rapids and rocks on the way to our intended base some 1hr travel upstream so yet again we settled in for a night and I experienced my first ever night in an hammock, quite comfortable but something else got in the way of sleep.  As mentioned if you miss the ferry you wait and at about 1.30am two busloads of people arrived and started to either eat or set up hammock beds in the immediate area.  Add to this to the lorry driver who had a broken spring on his wagon, he had been there when we arrived with the lorry up on jacks and we assume he was waiting for a new spring leaf since his was obviously broken.  The leaf appeared to have arrived with the buses, so he had started to fit it straight away with heavy and loud bangs every couple of minutes, not a good night of rest as you can imagine.  Being up early both Andy and I decided to walk along to the ferry and it was a sight to behold, definitely not capable of passing even the most rudimentary of health and safety checks, a definite case of cross at your own risk! 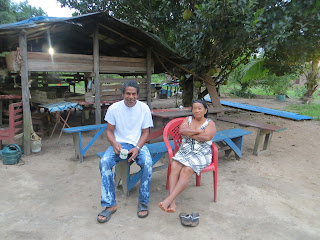 Our host and her chef in Kurupukari. 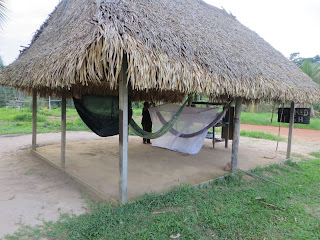 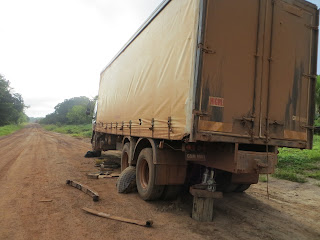 Roadside repairs - an everyday event on this road. 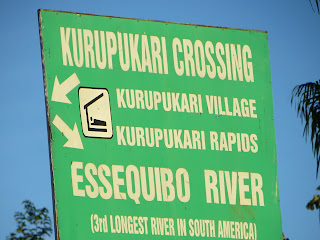 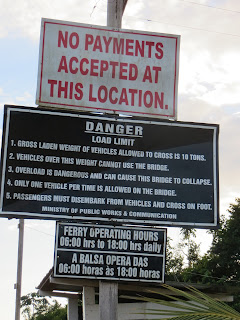 The guides Mark on the right, Laurence on the left. 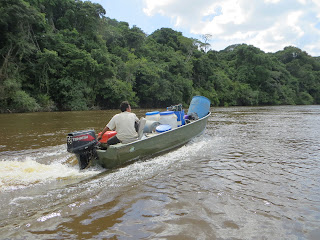 Laurence runs along side us with some of the supplies

At last everything was ready, we had a quite nice breakfast and went down to the river to load the boats and meet our two river guides, Mark and Laurence.  A big advantage here is that English is the main language and it saves no end of problems that we had on other trips to far regions with different languages to ours.  Into the boats and our 40 horsepower motor took us through the waterfall shoots and rocky regions under the expert handling of the boatman Raymond who seemed to know the river as we know the streets of our hometown.  The settlements we left behind were the last that could be reached by road and now we travelled on a big and very wild river with rain forest and 100ft trees densely packed on either bank.  In due course we arrived at our base camp and I felt the holiday had begun in earnest. 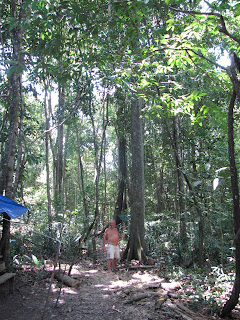 In the forest with Joe for scale against the trees.
Posted by Travelling Man at Sunday, March 24, 2013