Having travelled up the river and arriving at the camp that we would use for the next two weeks was quite an experience.  It is strange but there are very few places where you can land along the river as the forest cover is very dense at the water’s edge.  The growth goes from the water edge upwards to the canopy, whereas once inside this outside edge growth there is not enough light in the lower levels and all the growth is aimed at going higher to reach the overhead canopy.  Trees go up 70ft and more without a single side shoot, all the energy is going to reach up to the light. 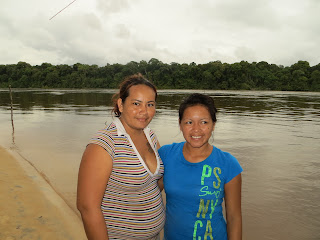 Trudy on the left, Amy on the right.


Prior to our arrival a lot of work had already been done, fuel, food and materials for a camp had already been brought up to the camp.  A large tarpaulin canopy gave cover to form a tented area with the hammocks and cooking area contained under its protection from the rain.  We met the two ladies who would be doing the cooking, Trudy and Amy and they were to prove to be very good at their task.  I’ve already mentioned Raymond who did most of the driving for our boat though occasionally Joe would have a session in the smaller boat with Laurence as the driver.  The last of our happy band was Jonathan who helped with a lot of the labour that occurred about the camp keeping the fire going and looking after the generator, occasionally he took the ladies out for a short session, fishing local creeks, it broke the days for them and they did catch as well. 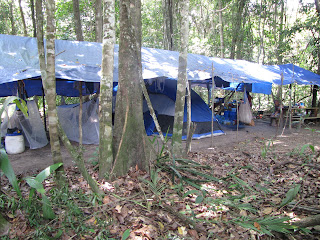 Shelter and camp for two weeks 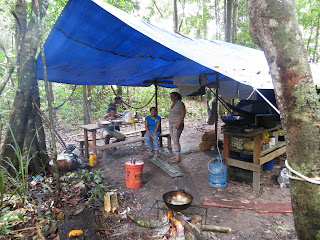 The kitchen and dinning area, bow tie not needed! 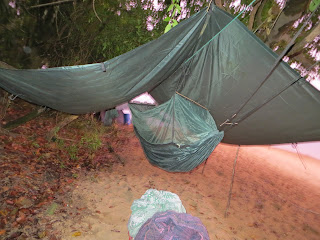 My bed on the small beach, the hammock pointing away from you in this veiw.


Rather than go into the fishing at this stage I thought I would run through some of the wildlife and such that we came across.  The major mammals stayed well away in the forest and we saw only a few of them though Mark did see a jaguar just a short distance away from the rocks that we were fishing off at the time.  He tried to call my attention to it, but by the time I looked it had gone back into the undergrowth.  I did manage to get photos of four different snakes, three of them alive and one of them, a coral snake and quite deadly was coughed up by a redtail catfish of about 15lb caught by Andy.  I was going to pick it out of the water for a better photo, but Mark stopped me since it would appear that even the touch of its skin acts as quite an irritant to our skin. 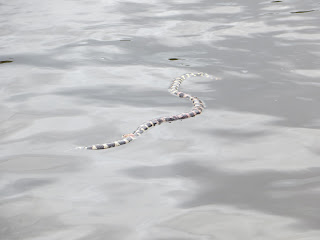 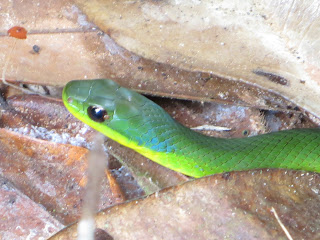 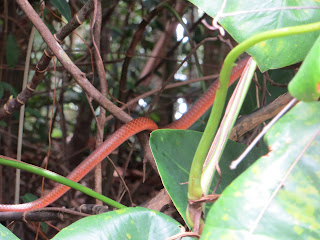 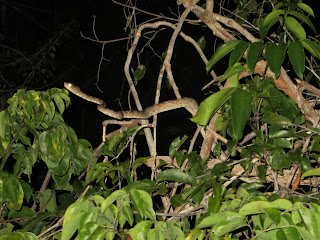 
We saw a number of iguanas and these would be resting in trees over the water and you would either hear or see as the creature dropped off its branch into the water and it would swim back to the bank.  One of these was brought back to the camp for the ladies to see and it did give the chance for better photos.  There were numerous small insects and the one photo shows a splendid fellow with what looks like feathers for a tail and an almost starry look to its wings.  The spider was the largest I saw and I placed the coke bottle near to it to give a size reference.  We saw numerous butterflies and travelling on the river you would see hundreds of the white or yellow type flying across the water from one bank to the other, but often a really colourful specimen would fly past, reds, bright greens, and all the colours of the rainbow though they did not land to give a chance for photos.  The camouflaged moth shown was very common and in the torchlight you could see dozens of moths of various sizes something like the English night sky 50 years ago, but not now.  The woodland butterfly shown looks like one of our common browns but it was perhaps four or five inches across its span, unfortunately I could not put a reference for size as they are too nervous. 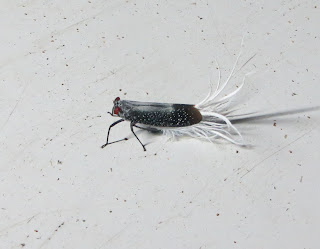 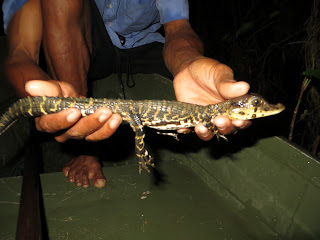 One of the small caymen. 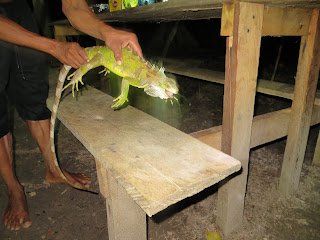 An iguana for the ladies to see. 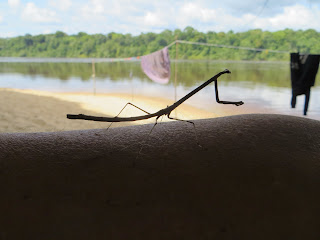 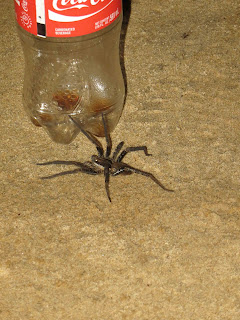 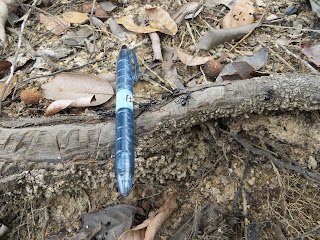 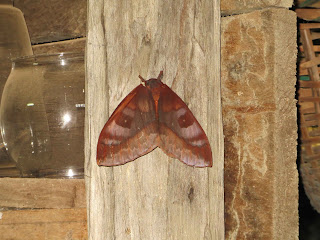 One of the big moths. 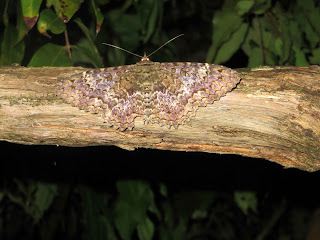 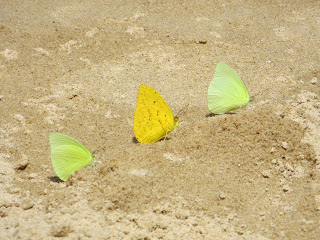 They sometimes looked like leaves blowing on a windy day

The bird life was tremendous but again difficult to photograph, you would see one in the trees but by the time you tried to zoom into its resting place it would be gone.  I’ve not identified many, but there were three sizes of kingfishers, and of course we did see a number of ospreys.  The black vultures were common and we were quite amused when on a midday break the lads set up their version of a deadfall to try a get one of these birds.  For some reason they wanted the feathers.  Strange though it might be you were far better off bird spotting in Georgetown, perhaps the lack of cover was the reason.  One thing we could sort of see was the caymen, they were everywhere but all you generally saw was the eyes in the torchlight.  With the river up over two metres they had retired back into the trees and it was very difficult to get photos.  We thought we had hit the jackpot when fishing one place in a slack created by an island, there were eleven pairs of eyes staring back at us within a very short section of bank but the check showed it to be juveniles with no large one about at all. 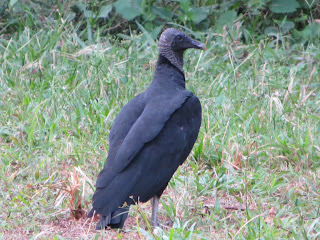 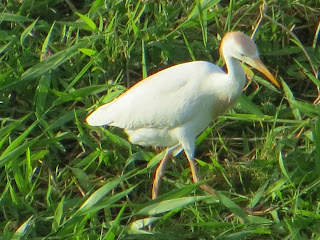 Lots of egrets to be seen. 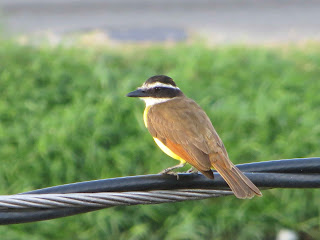 Striking colours on a town bird . 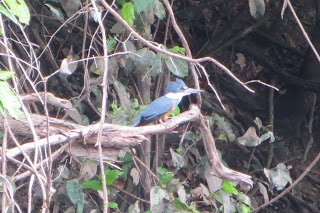 The smallest of the three kingfishers.

A quite pleasing find was that of a wild mango tree on the banks of a large lake we fished.  A clearing had been made by fishermen for when they were in the area netting fish and I collect quite a large number that mostly went back to the camp, I did eat a few before we got there and they are delicious.  There was also a coconut tree but the guides advised they would not be ripe yet, maybe next time.  Last and one of the more exciting sightings was that of the giant otters which we saw of three groups on different occasions.  I did manage to get a shot of a single animal after Mark had run me quickly to the far side of the river from our camp; the noise they make could not be missed and was only equalled by the howler monkeys that were heard most mornings, a haunting and very loud call.  We also saw spider monkeys shifting quickly through the upper branches of the trees but no photos. 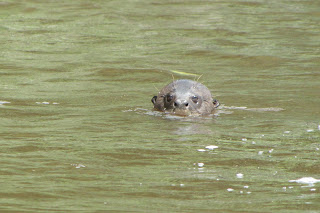 A giant otter has a quick look at us. 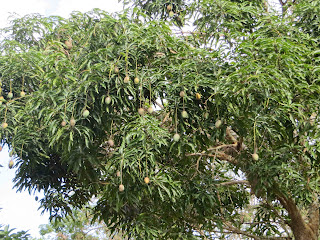 Mangos in numbers for free. 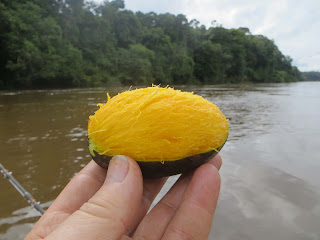 So that sums up the trip and wildlife, in the next blog I’ll look at the fishing.

Note all photos will enlarge if you click over them.
Posted by Travelling Man at Tuesday, March 26, 2013