Record crucian - the story behind the catch.

A long-standing invite from Ian Welch finally came to fruition and I was to go to the RMC Yateley complex to fish for the crucians with him.  The weather was terrible for anglers, but perfect for the fish, temperatures forecasted to go near the 30 degrees C mark with humidity going through the roof.  I got out my CAT collection of magazines and read the August 2003 copy [issue24] where Ian had outlined his methods that succeeded so well with the crucians, a couple of phone calls to him then gave some fine tuning to the methods described.  My personal best crucian was a sample of 3lb-10oz taken from the Summer Pit float fishing right in the side. That was a couple of years ago, now I was hoping to get one of the four pound fish that had been taken by Ian and some of his friends over the last several months.  That hope was there, but I was aware that the majority of the 4lb+ crucians had been caught in the spring when the fish were carrying spawn; this was now August though the fish would still be very big and a new personal best was well on the cards.  The pit is lightly fished with only a few invited guests and RMC bailiffs on the banks so I was obviously very pleased to have this chance at those giants. 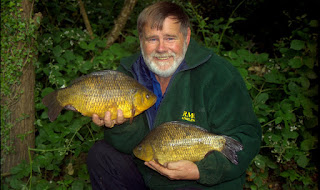 3lb-10oz and 2lb-14oz Summer Pit crucians.
As I arrived in the car park I was met by Ian, he advised me that he would put me into the top swim for these conditions.  Even with such a large lake there was very little sign of angler’s activity, just five swims were evident as we came through the entrance.  Ian mentioned that most of the banks were overgrown and unfished.  The lake is about 20 acres and my swim would be at the shallow end.  Normally I would fish for crucians just a rod length out but the heavy weed made this impossible.  Checking the area in front of me, I found a clear patch about 20 yards out and slightly to my left.  Following Ian’s advice again, no pre-baiting would be done; apparently the tench can be a major headache when crucians are the target.


Tackle in the main was as shown in the August issue, which said, I did do variations based on my own thinking.  The reel line would be the usual 6lb Pro Gold; I continued this through into the 10 inch hook length going to a size 10 Drennan Super Specialist.  A 2oz flat lead was fixed by means of a run clip which would allow the lead to release if the fish ran through heavy weed.  I used the 12ft Drennan 1.5lb Specialist Duo rod with the standard top combined with my normal Mitchel 300’s much to Ian’s amusement.  He thought that the Antiques Roadshow had come by but I feel comfortable with this model and have landed 95% of my fish on them over the last 30 years or more.


In line with Ian’s advice, I would be using a variation of the breadsticks he found so successful.  Two fresh large medium sliced loaves were put through a liquidiser to give a light fluffy mix.  Into this, I then introduced about eight handfuls of crushed hemp and a one-kilo bag of Force Baits Hi Betaine soft feed micro pellets.  These were flavoured with Scopex and I would use the Force Baits Scopex 6 m/m Hooker Pellets either combined with artificial corn or on their own.  The bread sticks would be threaded onto the line as a 2 – 3 inch cocktail contained by PVA stocking that melts away to leave the hookbait lying next to the feed.


Setting up on that Friday evening, the sweat was just pouring out of my brow, mostly because of the heat and humidity, but also anticipation of what was to come.  I had seen the odd fish just kiss the surface in the fashion so familiar to the crucian fisherman and felt very confident of catching.  I did catch through the night, not many, but enough to ensure my sleep was very broken.  The only problem was that they were all little tench running up to about 5lb.  Being so small I had to play each one as if it was a large crucian, the fight being almost identical and disappointment met each one as it came to the surface.  I had thought the night offered the best chance of the fish, and as dawn broke I was more than a little concerned that no crucians had been caught feeling the chance was almost gone until the next evening.

About 6:30am my right hand rod screamed off and I went on to land another tench, whilst rebaiting the hook, my left rod went and I thought a small group of tench had moved in so I manhandled the fight a little more than usual.  My error became obvious as a large crucian finally came to the surface and continued to give the spirited fight that the species is famed for.  At last the net went under him and the scales showed a very pleasing 3lb-5oz, not the target but well on the way.  I took a walk up to Ian to see how he had fared but at that time he was blank, at least he had a good night’s sleep without the tench to disturb him.  Returning to my tackle I continued to take the tench building up to a total of over one dozen, then, at 10:30 am with the sun burning well in the sky I hit another crucian of 3lb-13oz, a new personal best.  Even the tench bites dried up shortly after that and Ian came down to do the honours with the camera.  He had taken a fish of 3lb-10oz so the session must be counted a great success. 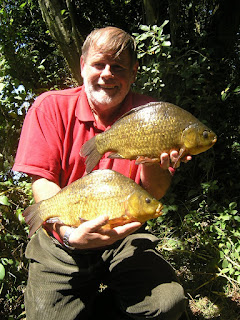 By now it was heading towards midday and the temperature must surely be in the region of the suggested 30 degrees.  Just sitting in the shade of the surrounding trees was torture with sweat dripping down my back and off my forehead.  The baited rods were still out in the swim, but with no real thought of a fish until at 1:30pm when the buzzer sounded off again.  By now I was near the twenty total for tench and my thought was this would be just another of them.  The fight was quite powerful and I thought it would be a male; they fight so much harder than the females.  It went back and forth in the swim ripping up weeds as it ploughed through them, no concern; after all it is only a tench.  Then it came to the top and I could see it would be a nice crucian so the gentle gloves went on.  I know it is a mistake to slacken off on the fight in these circumstances but it is hard not to do so when a large fish is seen.  This time it was no problem and I slipped the net under her and swung it around onto the waiting unhooking mat.  Lying there I noticed this one was going to be bigger than the previous one and I was sure I had my four-pound sample, the body shape being far plumper.

The scales and net were still handy from weighing the last one so with just a pause to wet the sling again I zeroed the net and lifted the fish within it.  Amazed is the only word I can think of for that moment, the scale showed a weight of a record size fish that should not be around at this time of the year.  Ian had suggested that we might get a fish of 2oz or 3oz over the 4lb but this was in a different street.  I quickly put her into a Queenford System net and ran along the bank to get Ian and his partner to check and witness the fish.  I suggested he brought his camera and scales with him and this was done.  We quickly arrived at the swim and as soon as he saw the fish Ian’s comment was this was a new fish to the area.  With such a lot of water that has not been tackled, it is quite possible that this fish had moved from the other end of the lake and was in this area for the first time and obligingly picked up my bait.  When Ian first lifted the scales he said 4lb-10oz, but they then settled back as the fish moved in the net and he finally confirmed 4lb-9oz a fish that subject to a weights and measures check could contend for the record.  As we took the usual photographs the fish began to shed spawn in a serious way making me realise how close the line between big and enormous. Indeed I saw that the same fish had been caught a few days later at quite a bit below that best weight when Martin Bowler took Ian’s advice and returned for the chance of a recapture for the ‘Fishing for the Impossible’ series.  In forty years of fishing I have had top ten fish on a number of occasions, twice a fish in fourth place on the list, this one would beat that. 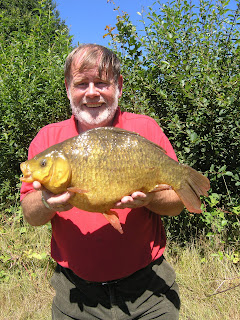 An equal record at 4lb-9oz.  Target met!
After that it was an anti-climax, the evening and night were a total blank and my only action was a fish lost to the heavy weed just on dawn.  That said who cares, it had been a magnificent session and I could hardly wait for the weights and measures result.  When that came it turned out I missed the record by the 9 dram margin but as today has shown that small increment was declared invalid since the scales used could not have shown that weight and hence it was rounded down to 4lb-9oz at the last BRFC meeting.


This blog is substantially that which was written at the time for my monthly feature in Course Angling Today a task that only came to a stop recently after a continuous near ten years.  For those not aware Ian Welch was head of fisheries for the very large RMC complex of waters until its change of ownership to the current Cemex brand. 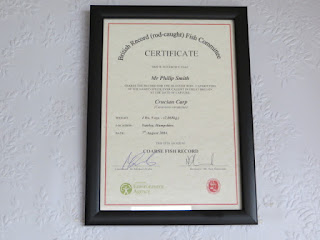