Well the new season is almost here and I for one can’t wait for it to arrive.   Last year I had a tremendous time catching a terrific range of specimen fish with regular consistency, this in turn lead me to win the Korum Cup in the Angler’s Mail; this year has been very different! 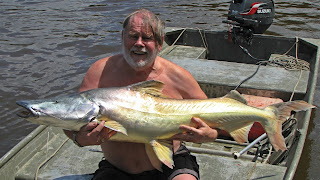 My usual early trip abroad with Joe Taylor went well, though the catches were below those of previous trips.  Fishing in Surinam my highlight was the capture of a golden lau of which we had seen, and knew of, very few numbers.  I returned to home and set my sights on catching a 15lb+ Warwickshire Avon barbel.   In this task I failed although I did photograph one for a friend, no problem here in that it is a difficult target and hopefully I will achieve it this coming year.  What was noticeable was over this period I caught very few fish and the two trips I did for chub on the southern rivers fared no better.   Each time I got flooded out and if I had decided to barbel fish instead I would have been ok, but I was in the wrong mind-set for that so I came home.
I then tried a new water for bream fishing over the next couple of weeks without success, not a surprise as I rate big bream to be the most difficult of our coarse fish to target and catch.  Now it was the beginning of April and the crucian fishing was the target.  The club had decided to alter the closing date and it would be closed for fishing from mid-April until the usual opening season date of mid-June.
Fortunately this gave me the chance to complete two three day seasions, three days is a club rule maximum then you must leave for 24 hours.  Over that period I took six crucians with the best going 4lb-0oz, 3lb-15oz, 3lb-13oz and 3lb-10oz.  A pleasing result and quite probably two or three of these would go well over the 4lb mark just three or four weeks later. 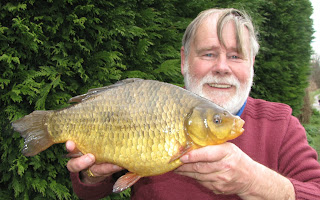 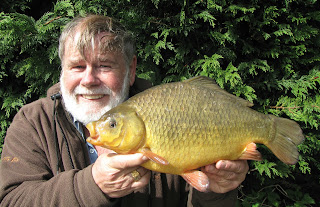 Unfortunately that was the highlight of the year so far, I went back to bream and now included tench in my efforts.  This was on a new water with unproven potential, but fishing there along with John Found we both felt the big fish should be present.  The ever present carp anglers told us of many big bream to very large weights along the tench that again would be interesting, none were weighed of course, and I am suspicious of carp anglers estimates.
One interesting highlight was that my first book 'Rainbow's End' was reprinted by The Little Egret Press and is once again available for those that missed it first time round. 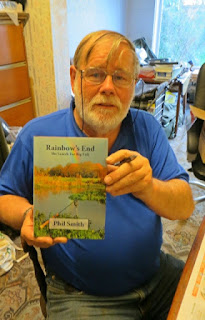 I have a number of original paintings by the like of Pledger and Turnbull but having seen some of the pencil drawings by Pete Wilson I decided to commission one of his works.  Very pleased with the result.  .His site is found at https://www.facebook.com/pcjportraits/ 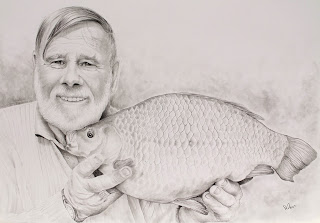 Last week we had an interesting diversion looking at an embryo roach project undertaken by Del Shackleford who is the fisheries manager for Reading & District A. A.   Following the success of the Avon Roach Project the club has decided to stick a toe in the water and follow the guide given by that projects lead.  Del travelled down south to spend a day with the lads running the project and they kindly gave him results of their trials and experience over the previous nine years.  In Del’s estimation this fact alone saved him perhaps four years of trials.  He knows he still has lots to learn and his own mistakes and false leads to follow but he, and the club, are committed to success. 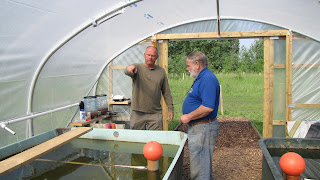 Del gives some explanation as to the methods. 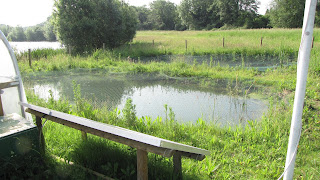 Solar panel to give power and netting to protect stock.


Using club funds and help from the EA in supplying some of the equipment the trial has been progressing for well over a year and I say the resulting roach that have come through the system are small but progressing.  Tanks are under cover in a greenhouse type of structure and water is constantly pumped through from a nearby lake.  This turns the water over about every fifteen minutes and the overflow goes into the nearby four pools dug to take the maturing roach as they reach a suitable stage.  The water coming into the system from the lake also carries nutrients that the small fry can use and this is then supplemented by appropriate feed as they get larger.  By the time the roach have over wintered twice they have already gone past many of the natural predators that would have depleted their number substantially and are ready to be restocked into the chosen venues.  This is a long term project and the results will not be seen for some time, but given time those results will come and the clubs venues will benefit from fish that would not otherwise have existed.
Posted by Travelling Man at Saturday, June 11, 2016