One of my targets this season is to catch a 15lb+ barbel off the Warwickshire Avon.   Having done my homework I know a river section of about 2.5 miles that is covered by several clubs that has a least one such fish.  Unfortunately this is almost the easy part of the capture of a specimen fish where you are then looking at the proverbial needle in a haystack.

In this situation it is very much a case of sorting out several good looking swims that appear to have the features that have proven to be to likely barbel holding spots.  These will be fished and over time some will produce barbel whilst others produce blank after blank.  These blanks do not mean that barbel will never be there, but normally after four or five attempts I would knock such swims out of my list and replace them with another choice.  On each visit I will fish two or three of the swims, but try to put a little bait into all of them on each visit, I’m not really sure if this helps, but it does give me a bit more confidence that at least the fish will be familiar with the bait. 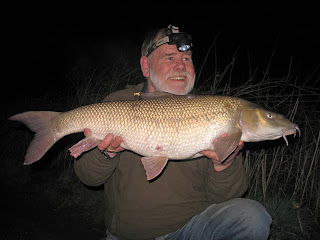 I started the season with a pb for the river that stood at 14lb-4oz and had been at that level for several years, then in September I managed to increase this to 14lb-7oz which was least a step towards my target, also it was a very pleasing fish in its own right.  I continued to pay regular visits to the river in between trips for pike, perch, bream, roach, dace, and eels in fact almost anything the swims in fresh water.  Of course I caught barbel, but nothing anywhere near my target and now we come up to date.
I had been to Spain after the roach for the first week of November and missed what appeared to be a very good time to be chasing barbel.  Very mild conditions with the south westerly wind bringing in plenty of rain to give perfect conditions.  Friends reported very good results and I hoped the fish would continue to feed and put on the extra weight that often comes with the barbel gorging themselves in the floodwater.  Two recent trips on the river had me thinking I had missed the boat, one a barbel blank with just chub being caught; the other resulting in an 8lb barbel and again a chub, but now very cold weather was being forecast.  With snow coming in overnight and temperatures down to near freezing I had not decided to go when about 3.00pm my dad asked ‘well what else are you going to do.’  I made a quick flask of tea and set off with the intention of packing up at 8:00pm.
Arriving at the river it was in perfect condition, a good touch of colour and probably two foot up on normal level, just as importantly no rubbish coming through which allows the baits to be left in place for about the one hour mark.  Again I’m not convinced if constant casting makes any difference, but I prefer to leave them out and just check the bait occasionally in case the crafty chub have pinched it without any indication of their visit.

As usual upon arrival I threw a small hand-full of my boilie into two spots, one slightly upstream and perhaps one third of the way out, the other well downstream and right across towards the other bank.  As the session went on every thirty minutes or so I would top both swims up with three or four baits broken in half thinking that the chub may well have taken those initially put into the swim.  Well wrapped up against the cold I was quite comfortable although my hands did indicate that the temperature was already falling quite low as the light began to fade.  Winter nights with a clear sky can be magical; I spend time watching satellites drift across the sky or the planes as they make their way to some distant destination.  Most nights I had had lots of chub knocks but tonight there was no movement at all until the upstream rod showed the interest of a fish.

The rod top just sort of waves , a gentle nodding action as the fish brings the feeder back downstream and probably does not realise he is hooked until I lift the rod and strike, then he knows  and makes off back upstream with lots of power.  There was an overhanging tree just ten yards upstream of my position with branches trailing well into the water, a large weed raft had built up on the branches and the fish got to this snag before I got control.  My clutch was set for playing a fish not stopping one, I had not allowed for him moving upstream and this could have proved to be a fatal error.  I tightened the clutch and had the anti-reverse on, then holding the rod out to its maximum extent I bent very hard into the rod using all of its 1.75lb test power.   This was a definite sh*t or bust situation and fortunately he moved back across the flow and responded to the pull coming back downstream, now although there was plenty of further power and action from the fish I was in control and he eventually came to the net.

This was an obvious big fish and having made him safe in a slack under my bankside I moved away from the slope and prepared all the gear, camera, mat, sling and scales.  It is my standard practice to leave the fish to recover from the fight in the landing net before I attempt to remove the hook.  Once the hook is removed I can then leave him a few moments in the water before moving him back for weighing and photos.  Once on the mat I recognised him as the same fish I had previously caught from a different swim, the good news for me was that he had gained weight and now weighed 14lb-10oz.  Three quick photos and he was returned to the water and after a few moments let out of the net into his dark murky home. 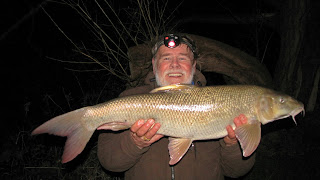 I stayed on for a little longer than originally intended and following my walk back to the van it was approaching 9:00pm and the van’s thermometer was showing 2C.  By the early hours of the morning the snow was lying thick and even with flakes tumbling down from a heavy sky, definitely a last minute gamble that had paid off.
Posted by Travelling Man at Saturday, November 21, 2015