Two monster barbel in a week in September.

Most serious specimen anglers will be aware that the very big fish can come at any time and will normally be just a bit of a surprise that the planning has finally paid off.   On some occasions there is no planning involved and then it is just chance that you met a fish that sets the pulse racing and over the last couple of weeks I’ve had both experiences happen in sessions producing specimen barbel.
The first came off a river that I’ve fished over the last decade or more with various successes.  I’ve caught my fair share of doubles and these have come on a fairly regular basis, but I have not managed to contact one of the rivers very big specimens.  This session was exactly the same as many others in that I arrived with no particular swim in mind making my choice once I’d seen the number of cars in the car park.

The river was fining down after the recent rain and I felt confident of success, I had arrived at midday and intended to fish through to midnight.  The previous week I had been one of the northern team in the ABF Barbel Challenge and managed to get barbel off each of the five rivers we fished.  While we fished the northern element the southern lads were fishing the south river at the same time.  I took note that of the twelve anglers involved only one other angler beside me managed barbel off the five rivers they fished and that was Julian Barnes.  I was very impressed with his bait in that he also caught a good number of barbel as well as the doubles we were seeking; the bait was Mad Baits Pandemic a new product still undergoing trials.  By the end of that week I had asked Julian if he could get me some of the bait with me paying rather than being one of the team of anglers already being used for the trial of new baits.  Fortunately it was agreed and I got my first batch delivered shortly after.

The next trip after barbel I of course used the new bait on my main rod though I decided on halibut pellet on my second rod that would be cast out of the way of my baited area.  The tackle used was as normal for me, Drennan Specialist Barbel 12 ft. rod in the 1.75lb range.  Shimano 5000 RE reels loaded with 12lb mono main line going to a new hook link line I’m trying out.  I had watched a friend using this while tench fishing and was impressed with its breaking strain/diameter ration so decided to try it, labelled Konger Steelon in the feeder version.  I got two different packs off e-bay, one at 5kg and 18mm diameter, the other 9.25kg and 28mm diameter and today I was using the heavier version.  This was then used with the feeder loaded with hemp and mixed pellets a method that has shown its worth over many captures of barbel.

I started the session about 2.30pm and although I got a few knocks there was nothing of note as I went into dark for the night session.  I was here until at least 11pm and maybe I would stay up the 12pm mark depending on conditions and how I felt.  At about 9.30pm that plan was lost as I hooked and played a very powerful fish that I finally got it into the waiting landing net.  I left it safely in the net to recover before I took the hook out and got it weighed, meanwhile I gave a phone call to Rob Thompson fishing a little further down the river to let him know I had a good fish in the net.  He asked its size and I suggested at least 13lb and he offered to come and do photos but as I told him if it had bee 15lb plus I would take the offer but self takes would do.  I got all the bits ready for photos and weighing, but as soon as I lifted it over the nearside rushes I could see this was really big, the scales told the full story and showed a weight of 16lb-12oz, a monster!  I phoned Rob again and gave him the news, he was highly amused, ‘over 13lb he says,’ but made his was up to me straight away.  There is nothing to compare to the feeling of catching really big fish and this was way up there in my list of catches, it was also great to have a friend who could handle a camera and Rob took four or five superb photos that just gives the final touch to a memorable session. 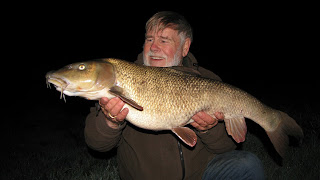 Over the following weekend I got permission to fish a very lightly fished section of the Warwickshire Avon,  over 2K of river bank with perhaps over half of it only lightly fished by two other anglers.  As you can imagine I wasted no time in going down to survey the length and have an evening session.  A lot of it was unfishable with a heavy tree lined bank and large bulrush beds, but there was enough fishable sections to be very exciting.  On that first visit I fished through to 10pm for one small 2lb bream.  Two days later I returned and having chosen a couple of good looking swims I again fished for a return of just one small bream, but I just knew it was only a matter of time before I got my barbel.  Another two days and back into the first of the chosen swims, a pool just below where the river rushed through a length where the rushes had taken the width down to less than half than its normal width.  This time I got my barbel and although it was only a small one it was still the first and as such I took a photo for my records. 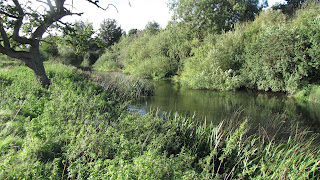 I stayed in the swim until 8.00pm without further action and then moved to my second choice, a long glide with overhanging trees on the opposite bank.  I had thrown a dozen or so Pandemic boilies in as I had come past the swim when I first arrived and now I threw another dozen in assuming at the very least chub would have taken those first few.  It was after less than an hour when I got the indication of a bite, not the powerful screamer, but enough that I struck.  At first I thought I had missed the bite, but then I realised that the fish was moving upstream going under the tree I was fishing next to.  Now I thought it was a chub since it seemed to head for a nearside snag and I put the anchors on only to feel the tremendous power of a big fish and yet again I re-assed my thought to a large carp that are known to swim in the Avon.  A couple of times I thought I would lose the fish as it got into the roots of the tree, but with the rod held directly above it its position and a very hard pull I got it free and eventually out into open water back below my position.  When it finally showed itself to be a barbel I was surprised to say the least, then when I lifted it after its usual rest period in the landing net I was even more surprised, again this was a very big barbel. 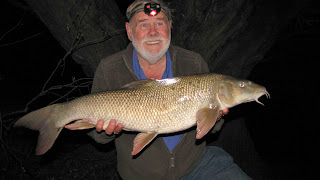 The scales showed me the good news of a new river best at 14lb-7oz, almost completely a surprise other than the fact the a big fish can come from anywhere on this river.  I had no more action that night and trips since then have only produced chub and bream but with two monsters in just over a week I am more than satisfied with my September barbel returns.