When Jerry Gleeson asked if I was up for round two of the Barbel Society Challenge in aid of the Army Benevolent Fund I of course answered ‘yes.’  Then he said ‘well I changed it a bit, we’ll go for 2 doubles of each river but over 10 days this time.’   The man’s an idiot and I told him so, no chance but we’ll give it a go! 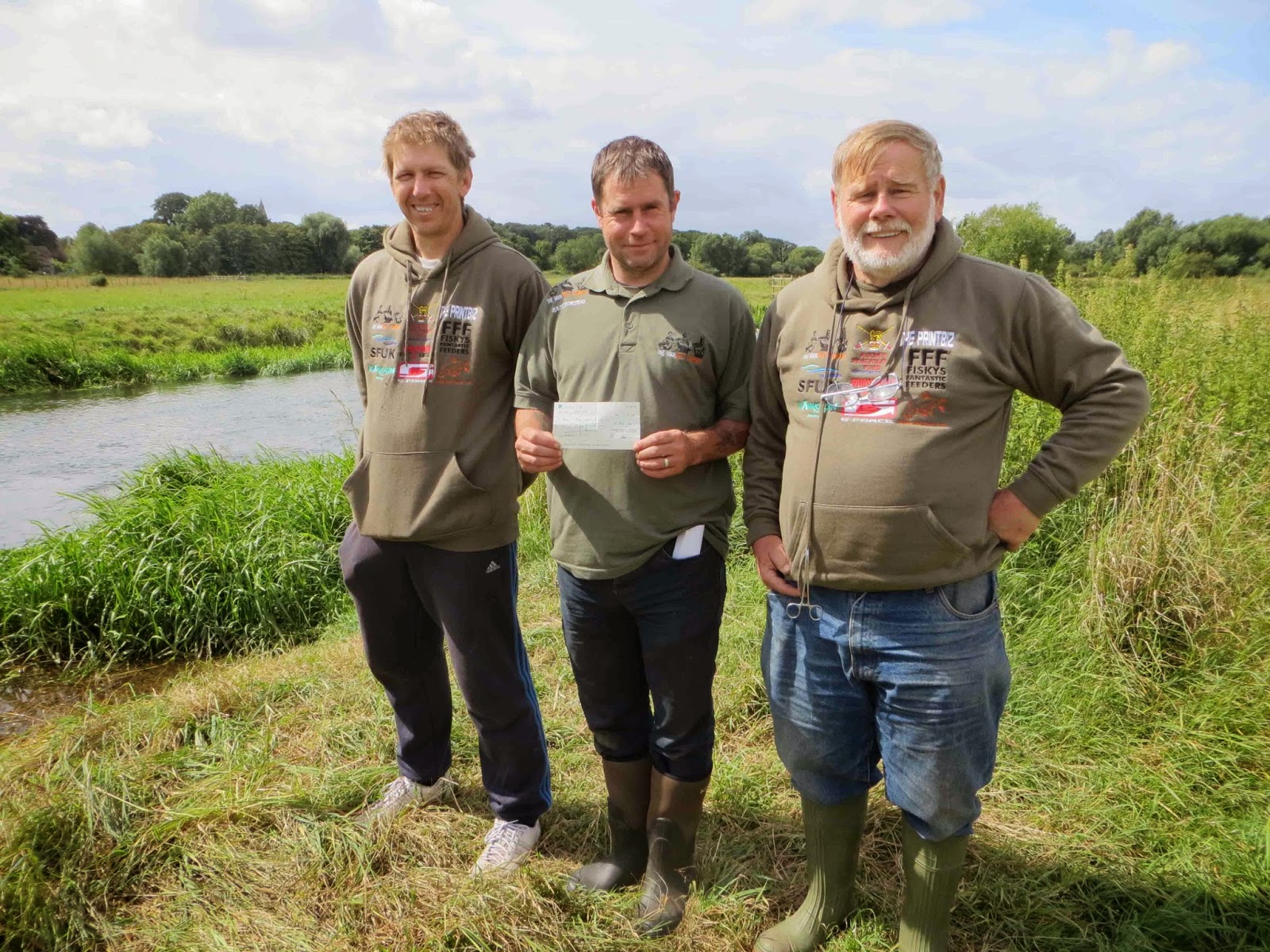 I had agreed to do the northern leg of the challenge along with Jerry Gleeson and Paul Floyd, There should have been a fourth angler, Mark Dutton, but unexpected events meant he could not do more than the first 24 hours with us and it was the intention that occasional guests would come along as a fourth angler and do a stint of 24 hrs or so at each venue.  The third angler on the southern leg who would be my replacement would be Dave Chambers; this would complete the anglers that did the same event last year.
The six rivers I would complete would be the Dove, Derbyshire Derwent, Soar, Trent, Nene and Warwickshire Avon.   Then the Jerry and Paul would go south and complete the challenge on the Lea, Lodden, St. Pat’s Stream, Thames, Colne, Kennet and Hants Avon.  In order to complete the 14 rivers in ten days some of the rivers would only have one, or maybe two anglers on it for the session, such was the case with me on the Warwickshire Avon which I fished alone.  The reason for this change is fairly obvious, it is a killer doing 14 continuous days along with hundreds of miles travelling between venues, Paul and Jerry did it last year, but would not do it again.

It started with a meet in the café at Tutbury where Mark, Jerry, Paul and myself had a full English breakfast to start the day off on a good foot.  Following that we set off to the chosen section of the river and we soon had tackle in place in each of our swims.  The river was low and clear, but with the session lasting until mid-morning Saturday there was plenty of chance that the fish would feed at some stage of the session. 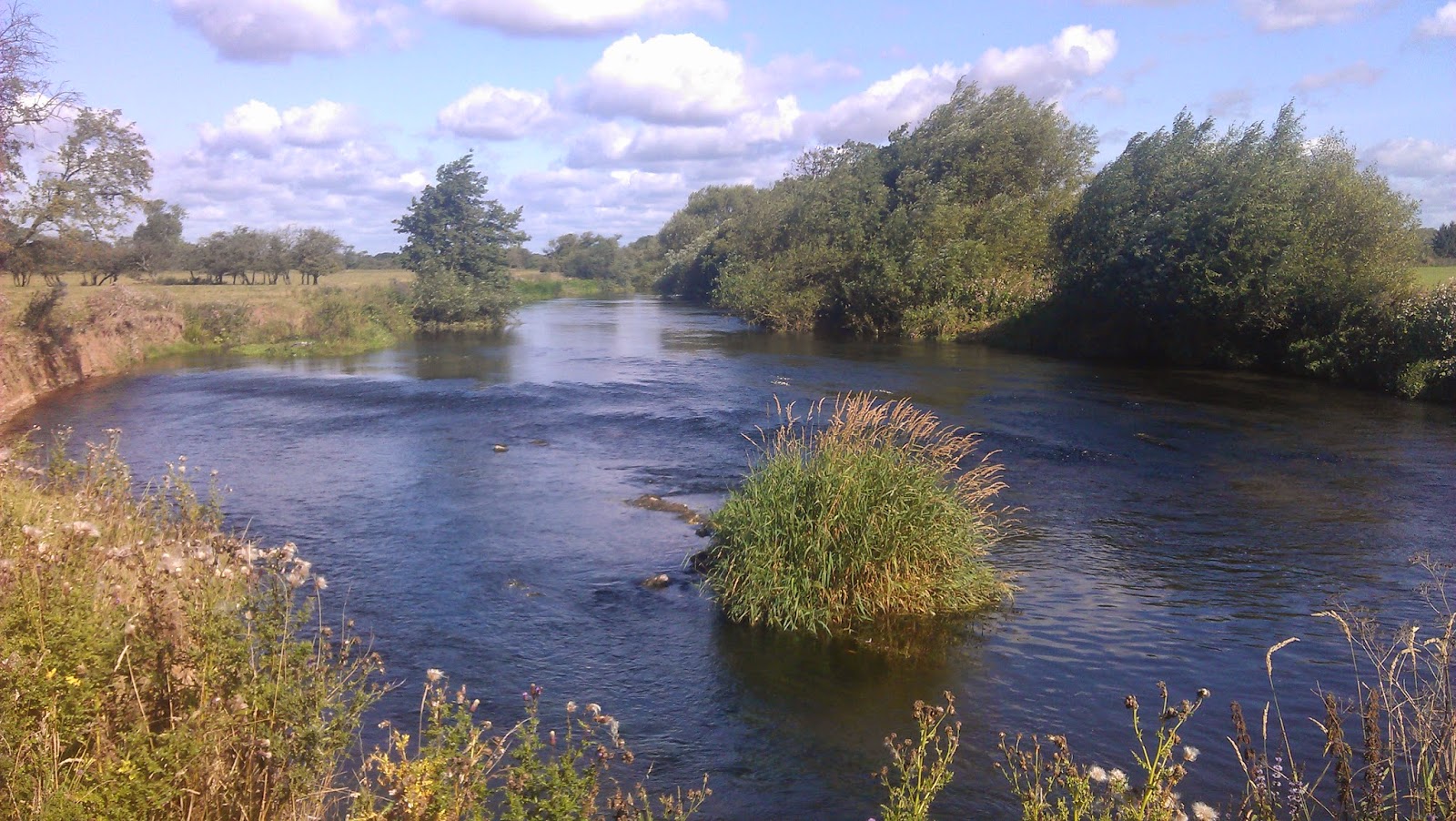 River Dove in its glory.

We each used our own methods and tactics in the attack on the Dove barbel and on their day we know that each of us can catch barbel.  Early results came in the form of chub and it was well into dark before Mark caught the first of this year’s barbel.  At 9lb 6oz it was below our target, but welcome never the less.  The night was quiet after that and a near full moon looked down on our efforts until well into the night when I got word that the first double had hit the net.  Paul was the fortunate angler and his successful swim from last year had produced the goods again in the form of a 12lb 2oz specimen barbel.  First bit of the challenge done, but could we get the second double we hoped for.  Jerry hooked and lost two barbel, Paul landed two more nice fish that fell short of the mark and that was the final result as I failed to hit a barbel at all.
Once dawn comes I try a get a little sleep rather than the dozing done overnight, I have a recliner chair I brought for last year’s effort and although not as comfortable as a bed chair it does the job to allow a few hours sleep before the next move.  That move was to the River Derwent where two clubs had been good enough to offer their waters for the 24 hr session, Derby County AC and The Earl of Harrington AC.  Having walked both lengths we discussed swim options and decided to try the Harrington side having completed the Derby side last year with good doubles caught.  The forecast for the next 24 hrs was quite wet, so by mid-afternoon we were all in place with a good shelter over our heads. 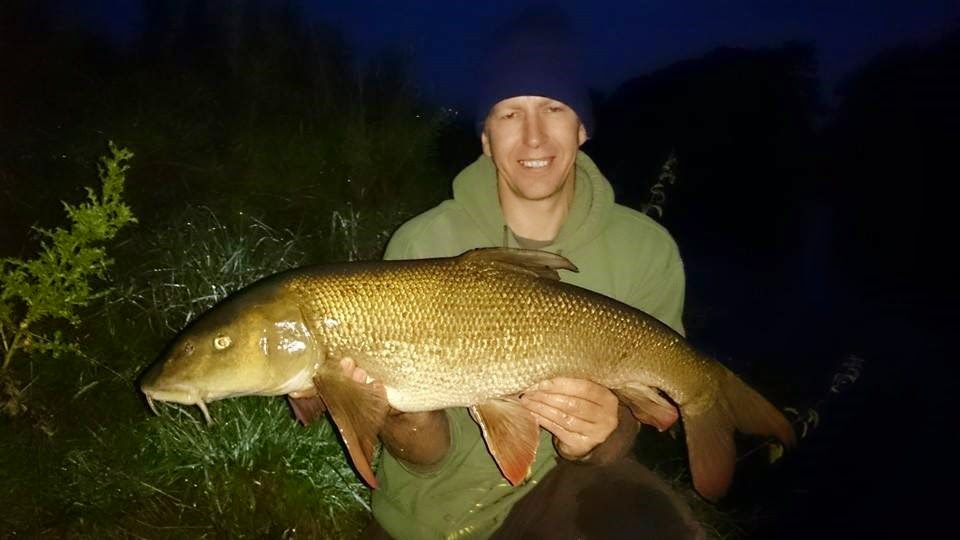 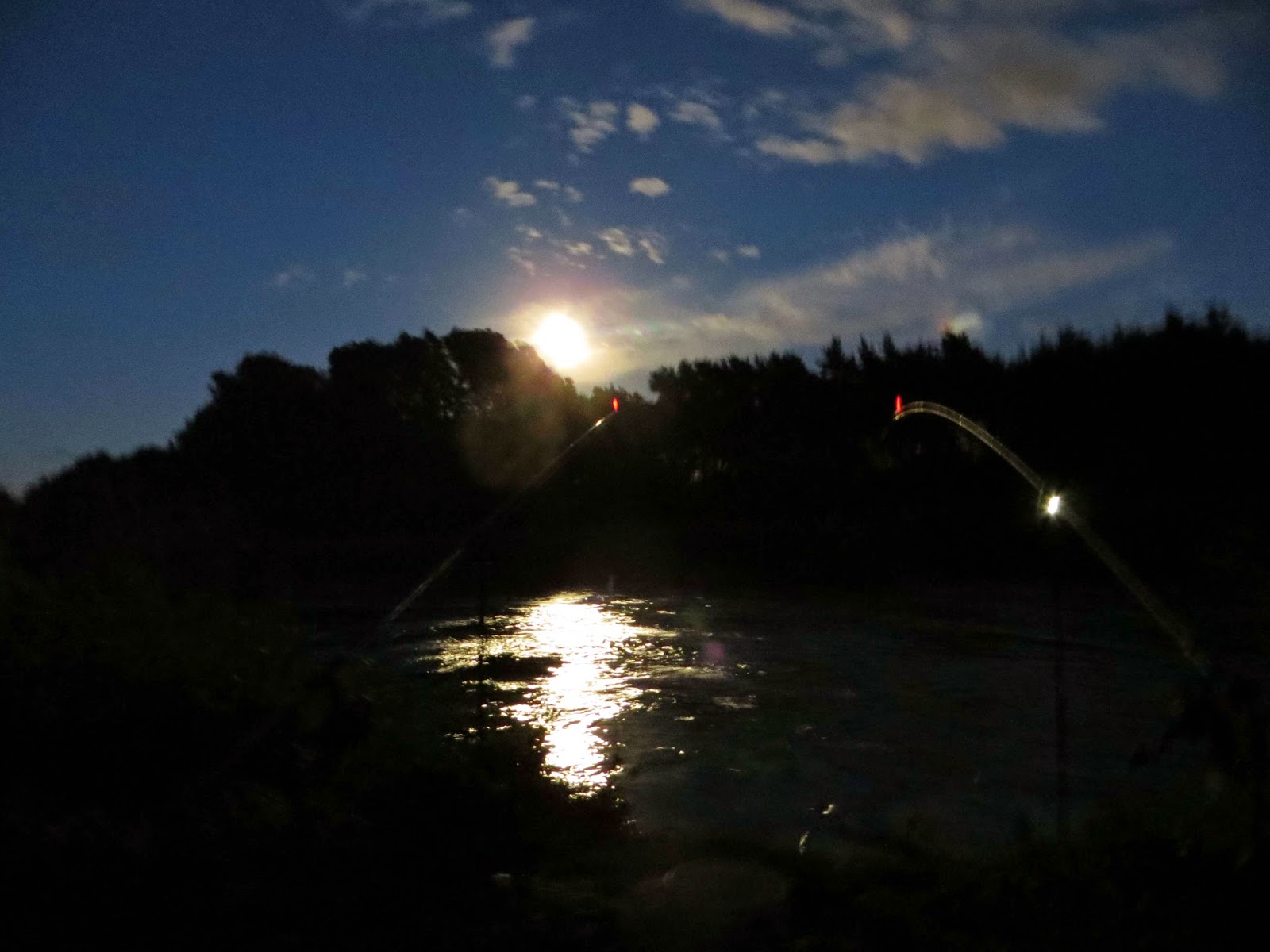 At this point I should explain my approach to the swim which would be similar to that I used at each venue.  As always, my rods are the 12ft 1.7.5lb test Drennan Specialist Barbel, Shimano 5000 RE bait runner reals loaded with 12lb breaking strain main line.  The hook link is 15lb Stren braid with a size 8 Drennan Continental hook in place.   This rig would be used with open-ended swimfeeders loaded with mixed size pellets and hemp, whilst the hook bait would either Elips pellet or Dynamite Source boilies.  I bait dropped a pint of hemp into the swim and all was ready. 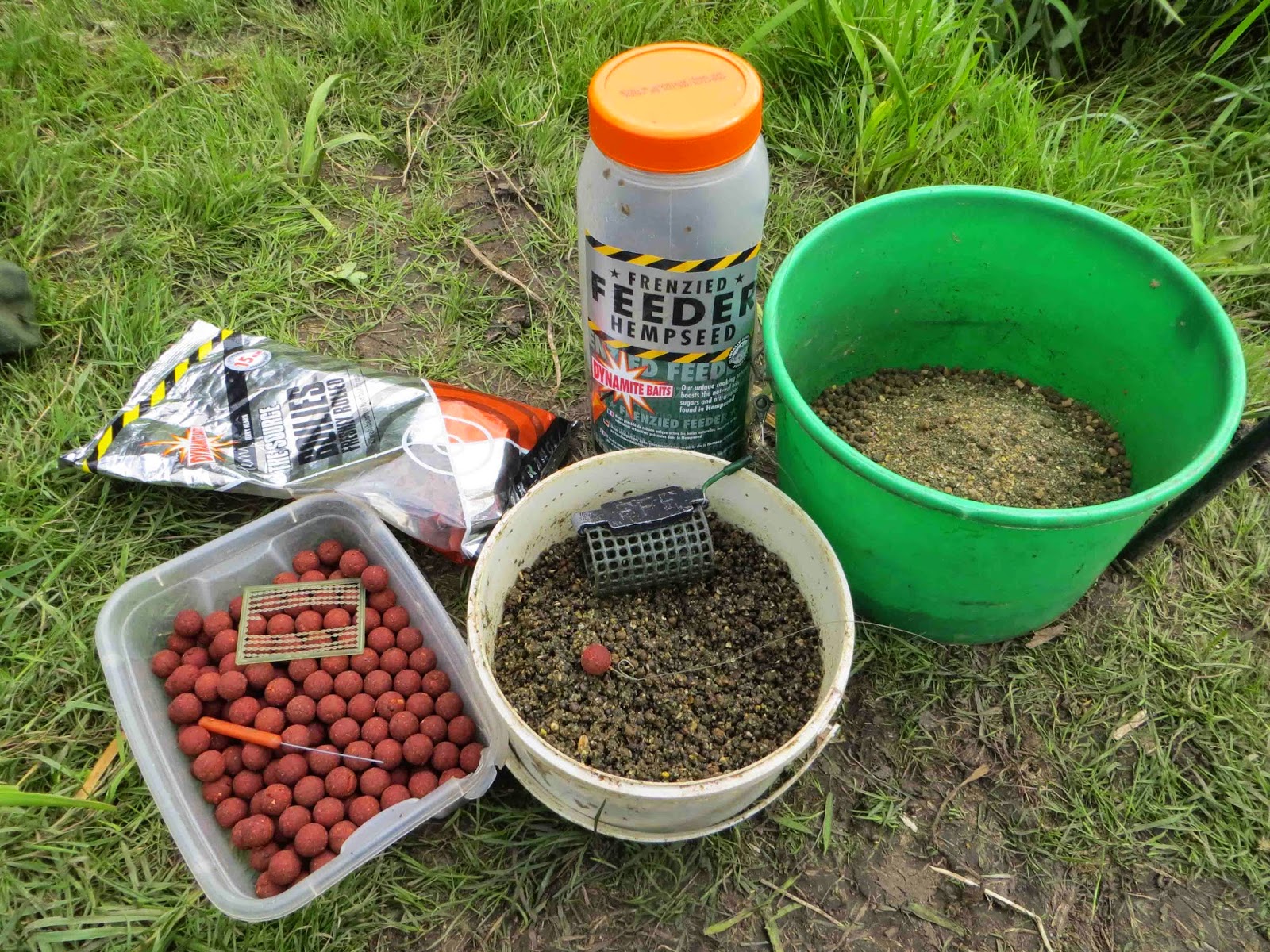 With the boilie cast to the baited area and the pellet cast some 10yds downstream of that baited area I could sit back and wait while recasting every 30 minutes or so.  Nothing occurred through the rest of the afternoon but the rain started as forecasted and I was glad of the shelter with sides rather than just the umbrella I would normally use.  About 10.15pm I got a powerful run and the strike was good.  I was fishing a section with quite fast water and this fish took full advantage of that to help it resist my efforts, but eventually he had to come and I gave a cheer as he went into the net.  A nearby angler had come along and he helped me get up the wet steep banks with the fish and then to weigh him.  My usual guess had been 12lb + and indeed he proved to be a new river best for me at 13lb-5oz.  I returned to rest in the water while I phoned Paul and he came up for photos etc., another river double done but could we get the second here? 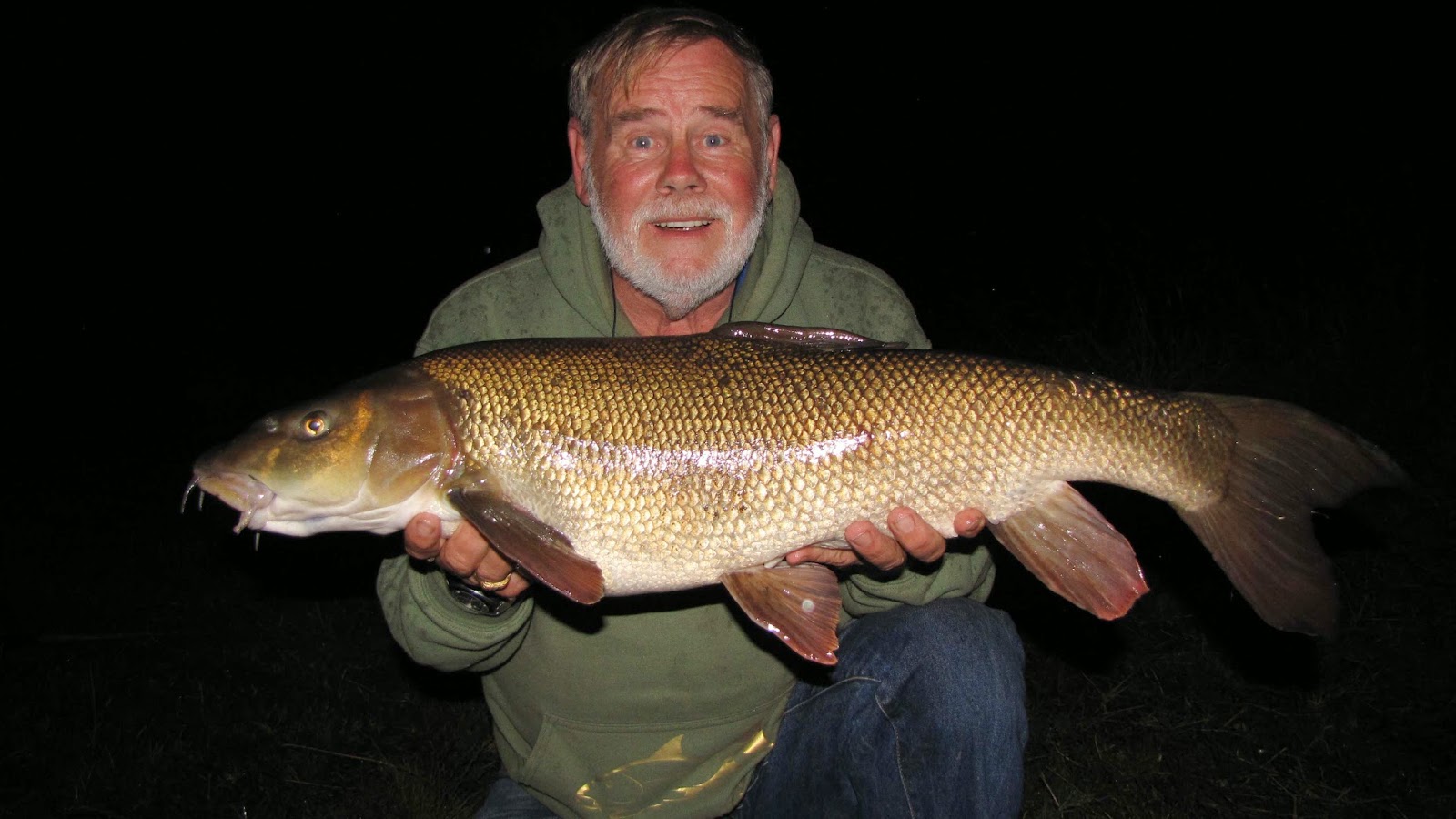 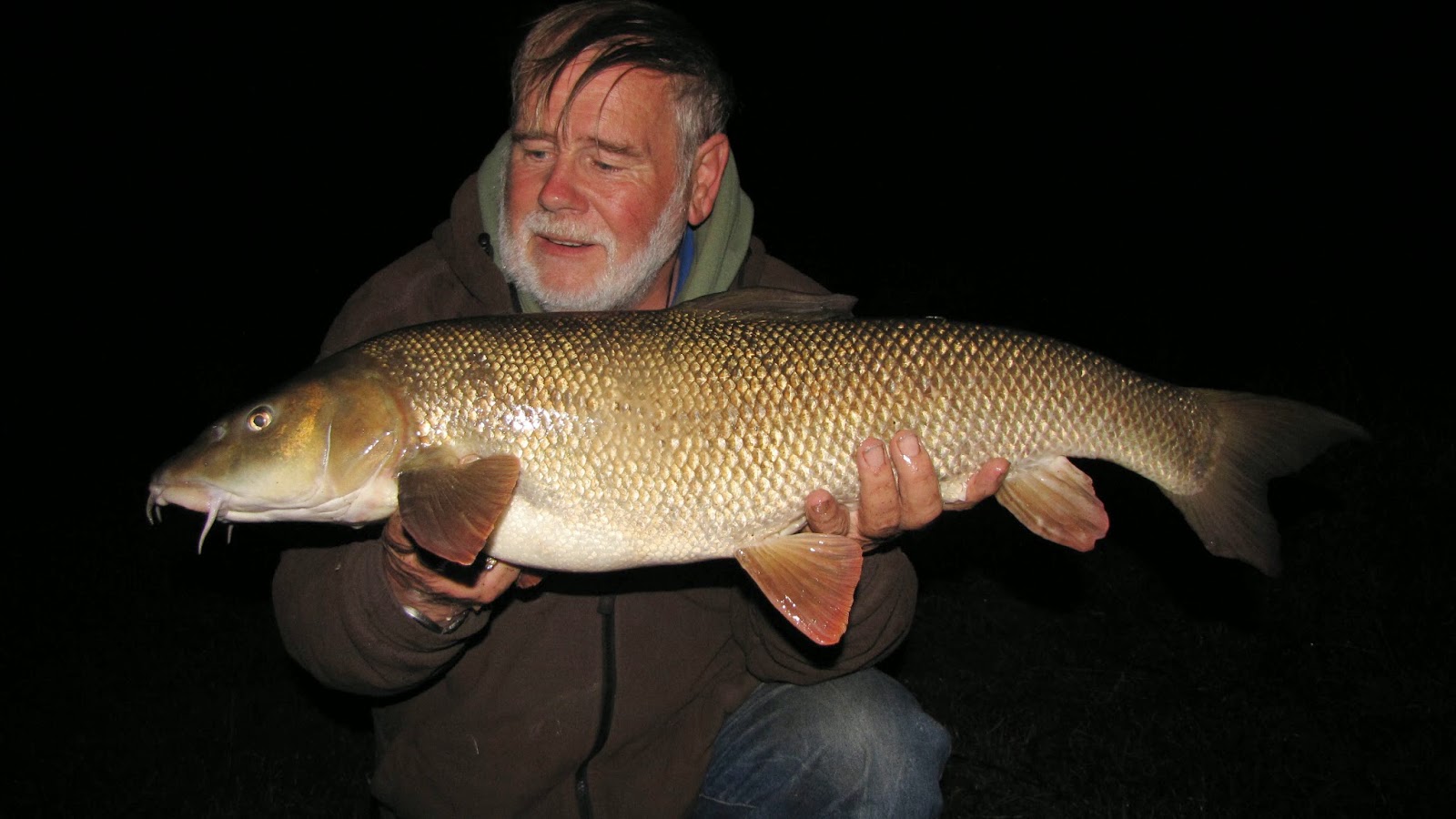 We all settled back into our respective swims and the rain continued to tip it down but that was forgotten when about 1:00am the same boilie rod went again with the fish giving another battle royal before being netted.  This fish weighed in at 11lb-12oz to give a brilliant brace and our first pair of doubles off a single river.  Paul was to loose what he thought was a very good fish when it swung into the roots of an overhanging tree downstream of his swim becoming totally snagged, just bad luck and something you can do very little about.  After that little kip after dawn it got to the time to move, it was still raining very heavily but with it forecasted all day we had to pack up.  For this river we had been joined by Jon Preen who is a local angler and he fished through to around midnight before going home.  He had extended an invite to his house for breakfast and a shower, with both the lads soaked through to the skin it was a welcome chance to change into dry clothing.
That afternoon, dry, clean and well fed we made our way to the Trent as the next port of call on our odyssey.  As expected the river was rising and the only question would be ‘how high’ would it come.  It is a well-documented fact that barbel feed better in a rising flood, closely follow by a falling river after a flood, we were to take advantage of this over the next few days in spades.  For this river I changed my 2oz feeders for one of Fisky’s 6oz heavy duty jobs and along with this change I decided to fish both rods on the Source boilie.  Fortunately the rubbish coming down on the flow remained within reason and casting every 15 minutes seemed to keep the tackle sound.  The Trent is a very snaggy river and if the rubbish on the line builds to a point where it moves the feeder then look out for trouble.  The advantage of this recasting was that it did build up the feed in the swim and by the time dusk fell I was very confident of catching.
I had taken a chub in the afternoon spell, but the first barbel came just after 10:00pm and it weighed in at exactly 10lb, I phoned Paul and reweighed the fish for him to confirm that weight.  Have you noticed how you feel guilty when a fish weighs exactly the target weight, 2lb roach, 10lb bream etc. but some must always do so.  Fortunately the rain had stopped and throughout the night at regular intervals I caught a number of barbel mostly between 6lb and 7lb though one very fat specimen did go 10lb-14oz to give me a second brace of doubles.  My total for the night was 7 barbel and that really was pleasing and the flood stopped perhaps 2” below my swim before starting to fall again, unfortunately the other two lads did not get a bite for some unknown reason.  Four rivers down and at least one double off each, this is as good as we could hope but would it continue, I’ll let you know in part two. 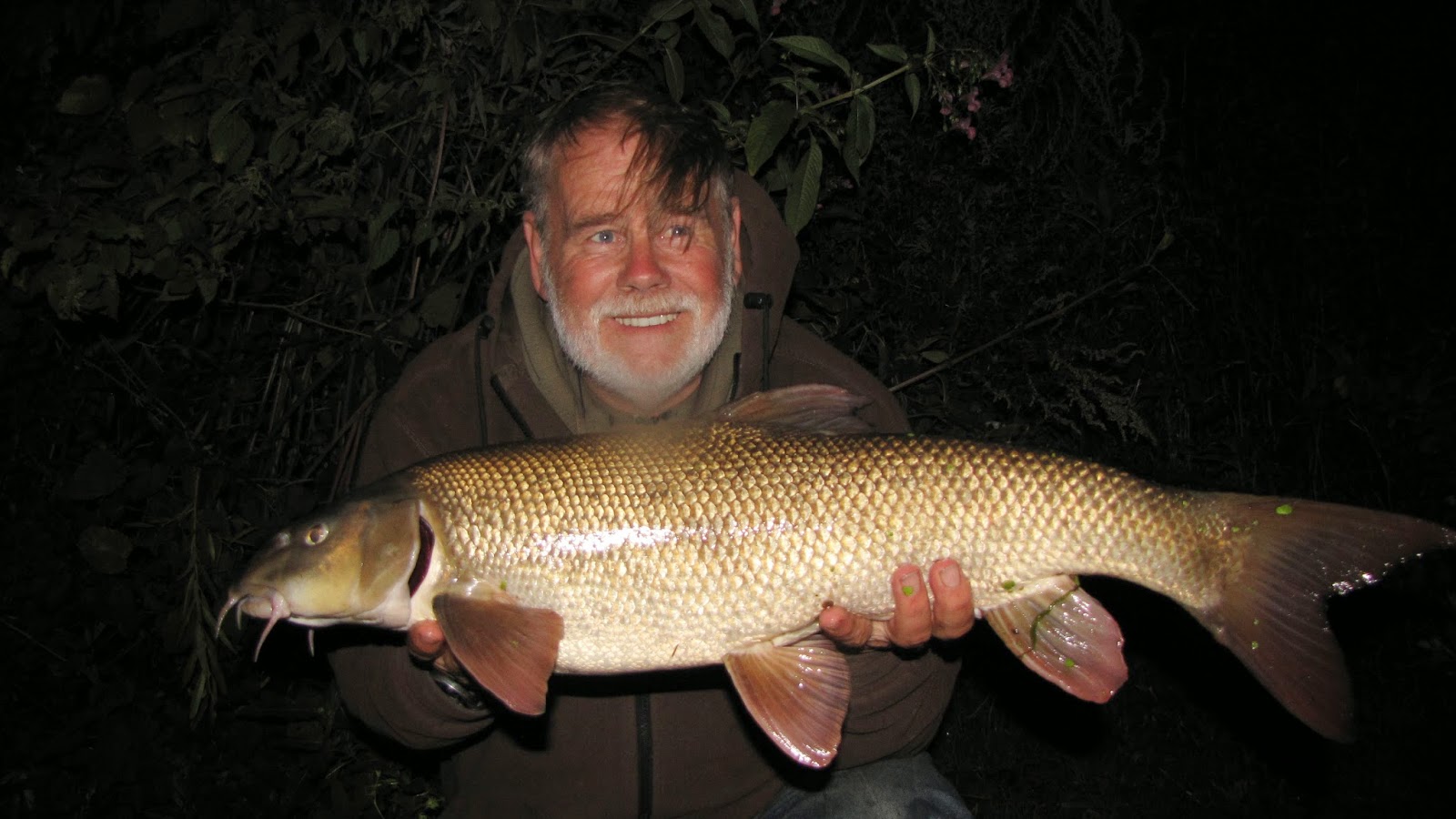 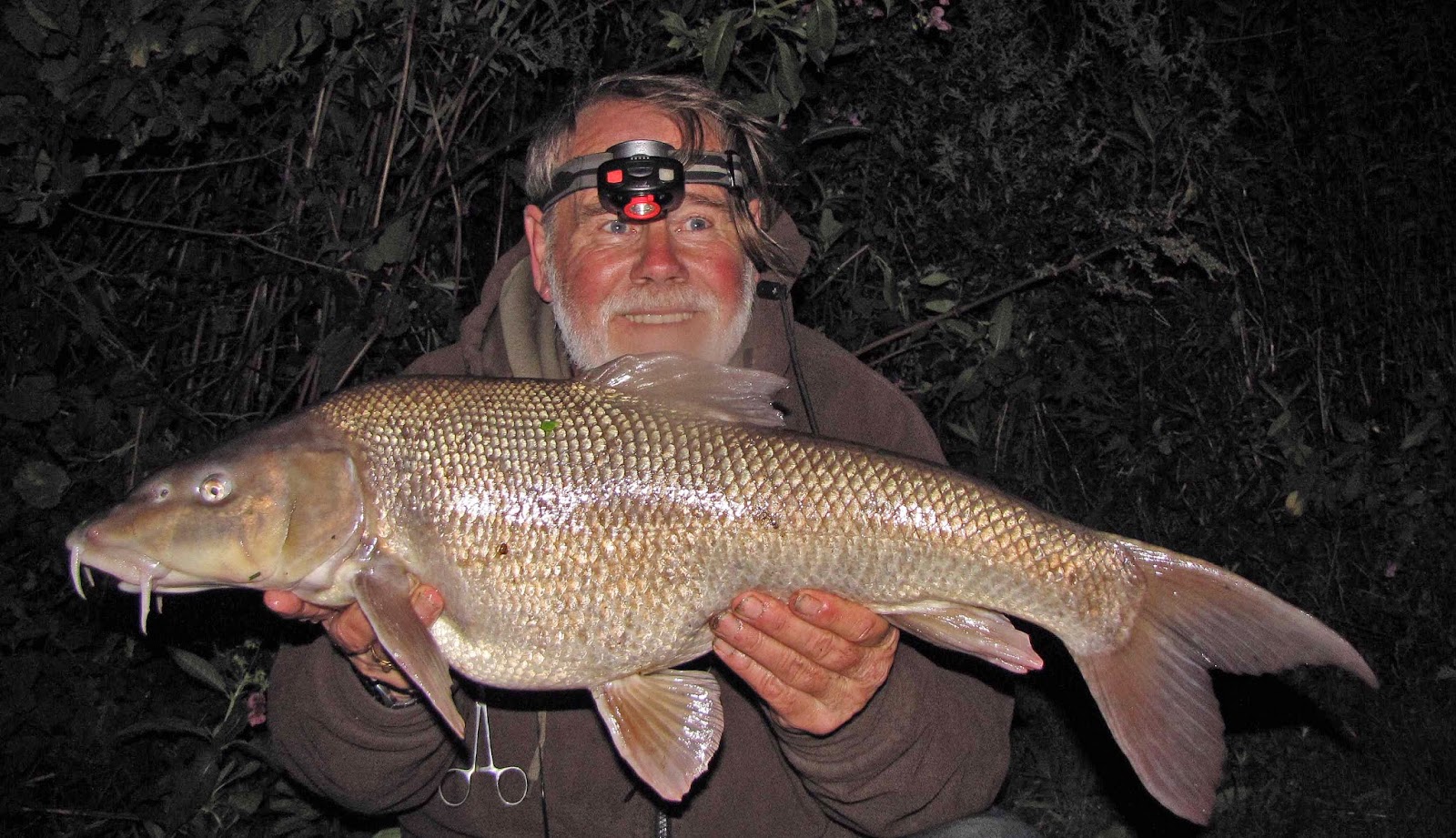