With my fishing results being so poor since my return from Spain I thought a mention of the latest book I’ve obtained would be of interest to my follows.  I collected the book on Saturday whilst at the Tenchfishers AGM.  The title is Backwinding and it was written by Alan Rawden outlining his lifetime pursuit of specimen fish of all species. 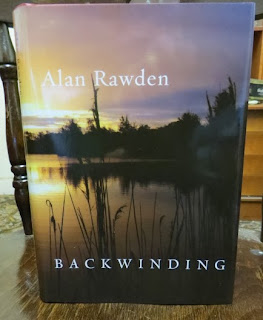 Alan is a very successful specimen angler of the old school and unlike me he has not publicised his catches to any great degree.  This does not mean he did not catch, indeed a scan through the book soon shows the reader the scale of his achievements by just looking at the many photographs of monster fish of all species.
Alan would be a similar age to me and while I have written three books to cover my life and achievements in angling Alan has done it in the one book.  That said at 350 pages and weighing several pound in weight it is a hefty tome and will not be read in one session or even several long sessions.

It starts as you would expect by outlining Alan’s early life and fishing, then it carries on to explain his methods and results working through different rivers or venues rather than by different species.  The result of this is that it is simple to read through the different areas where you relate most easily.  I for one began on the River Stour chapter reading through the capture of several 7lb chub to a climax of an 8lb plus specimen.

Once I had finished reading that chapter I moved on to others where I had either fished with Alan or at the very least fished the same venue and I could compare my efforts with his.

So far I’ve only scratched the surface of this book but already it has shown itself to be well written, with a professional  lay out by Martin Mumby and produced to a very high standard, a book that will surely become a classic amongst specialist anglers.

Email ThisBlogThis!Share to TwitterShare to FacebookShare to Pinterest
Labels: Book.