The search for double figure barbel.

My self imposed idea of getting a double figure barbel off different rivers continues to affect my choice of venues and this time it has impelled me to return to the River Goyt at Stockport.  I’ve done a number of trips here and caught on most of them but the double has eluded my efforts, this time I hoped to correct that so that I might move on to other rivers. 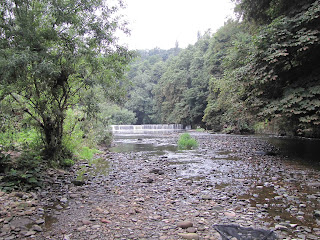 Arriving at midday I found the river to be very low, in fact the lowest I had seen it in my limited number of visits.  No problem, the barbel must still be here but those conditions can make fishing more difficult.  I had come armed for a two pronged attack, casters with hemp but backed up with a few boilies for the flyer rod which would be fished either upstream or down depending on the character of the swim. 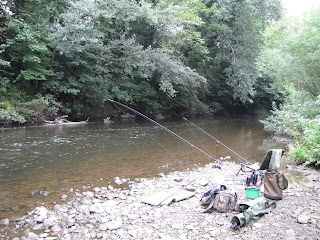 
In these conditions it is easy to see how so much tackle gets lost with the river at normal height, there are pebbles going from small right up to bolder size along with other debris.   Obviously it was a case of choosing one of the pools or deep runs still left and I decided on a run not far below the weir.  Quite pacey and about 4ft deep it looked the part and just maybe it might be a route the barbel would use between the weir and pools downstream of the spot, I could only hope.


With the rods already set up for boilies I soon had the first bait sent out just upstream of my position and I then set about changing the second tackle over to suit casters.  Before I could complete that task I got a sharp knock on the baited rod and then the tip just bounced as the fish obviously moved downstream with the bait.  At this stage I assumed a chub had taken it but the strike quickly convinced me differently.  In that fast flow I had a very good fight of a barbel that would prove to be the biggest I’ve caught of this river at 9lb-5oz, A great start to the trip and it did give me a bit more confidence for the rest of the session. 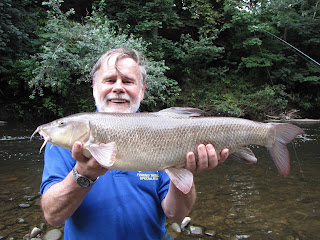 A quick result this time.


The following hours were bit of an anti-climax in that the most exciting thing that happened was me trying to get photos of the three dippers that kept me company through the day.  These are amazing birds that can swim under water even in the fast water in this area of the river. 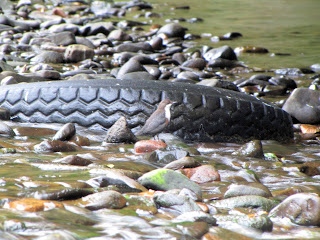 
As darkness fell I did take another two barbel of 4lb and 6lb sort of sizes and these proved to be the only barbel caught over the trip.  Disappointed?  Yes, but at the same time it was a good trip with a new river pb so maybe not that disappointed.