Normally when fishing alongside friends at different venues I get a fair share of the fish that is until this trip to Chew Valley after the pike, I became the gillie for the day netting, landing lots of big pike for my partner John George.  We had two days fishing on the boat and with the reasonably mild weather it looked good for fishing.  There had been a 42lb pike off the bank the previous day so it seemed that Chew was still on song for a big fish, a real ‘dream maker’ venue.  Of course it is not reasonable to come for a 40lb fish, but the 30lb size is caught often enough for that to be a real target and I would think it is the hope of most of the visiting anglers to get such a sample.
Initially we set off from the landing stages for Wick Point having had some success there last visit, a quick check soon showed that with the water level down by 6ft or so, it was not really right with the amount of weed still growing in the area.  We set off back towards the opposite bank and kept a check on the sounder looking for a bit more than the 6ft now showing, further and further we travelled but with a maximum of 9ft it was not time to stop and anchor.  Trying to steer clear of a number of boats already at their chosen station we finally found 16ft at about 500 yards off Nunnery Point and dropped the two anchors there.  Like a fool I had believed the weather forecast and had no waterproofs with me, it of course it almost immediately rained quite heavily for 20 minutes or more just to make sure I got well and truly soaked.  That should have been the warning that the day was not going to go well for me, but I carried on in ignorance of what was to come.
As is normal in boat fishing we put our two rods each out to the points of the compass and within ten minutes John had the first indication of a bite as his float slide away and the strike met solid resistance.  Initially it did not seem a big fish but after it woke up there was quite a scrap to get it into the waiting net.  An obvious big fish we both wondered if it would go 30lb since once they are this big it can be difficult to decide.  As always the scales told the tale, though at just over 28lb John was a very happy man, even with no more fish his trip was successful. 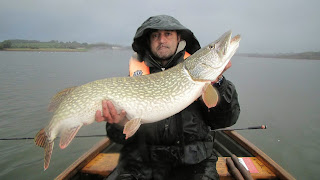 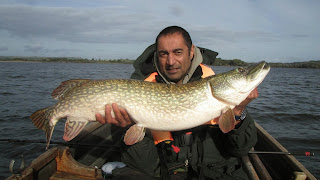 Of course you will already have gathered he caught others and this is how it went.  We sat in that swim for another couple of hours and the capture of that first fish had brought another boat quite near our position so it was time to move.  Again we headed for open water with no boats and anchored up again.  This time it took a little longer but then his float disappeared and following an interesting fight I slid the net under a fish that went 21lb-8oz, starting to get a little worried now but then I got a chance but it only went 11lb or so.  Then John capped his day with a magnificent specimen of 30lb-6oz to give him a new pb. 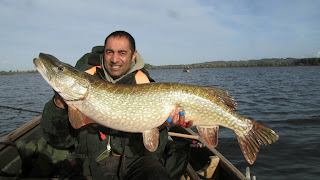 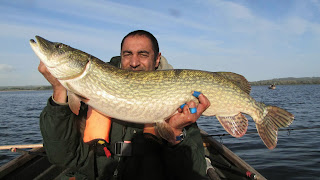 Two 20lb’s and a 30lb should have been enough, but yet again he caught and this one went 20lb-4oz to end a memorable day.  The following day we blanked and it appeared most of the other anglers fishing did exactly the same.  Hopefully back again next year.
As mentioned in the last blog, I had my timing for fishing trips quite badly organised and having arrived back about 8.30pm on Friday I had to sort out the tackle and change over for a week’s session at Lochnaw in Scotland starting Saturday, big roach being the new target. 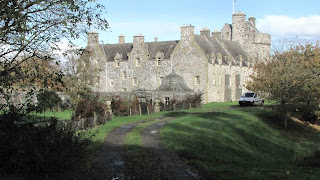 John Found, my usual partner for these trips had to call off being quite poorly with a heavy chest cough that already lasted six weeks.  At very short notice Andy Dalby stepped in and needed an even quicker tackle sort out than I had experienced.  The other two anglers who would make up the party of four were fellow Tenchfishers Group members Matt Dooley and Wyn Jones who was making a return hoping to better his 3lb-2oz specimen caught on the spring trip. 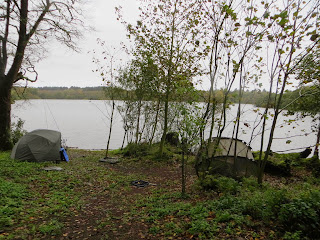 The good thing about this trip was that it stayed dry both at the beginning and the end of the session, but in between it rain almost all the time broken only by times of gale force winds.  The lake is 48 acres and it has many feeder streams running into it which in turned caused the lake to raise since there is only one outlet.  Fortunately this caused very little trouble other than being fairly unsocial and our talks back at the lodge over dinner time was the main time to exchange ideas and other talking points. 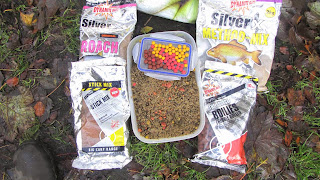 Feed for the roach. 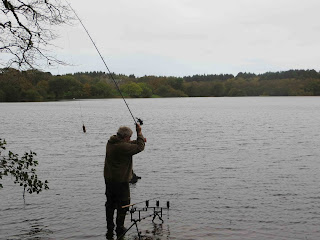 Andy set ready to launch his bait out.

My tactics which would have been very similar to the other three anglers was to use a method feeder and various 10mm boilies.  Source, Pineapple and Esterberry were my choice but others have worked in the past for different groups.  I had decided to bait drop about 1.5k of method carrying chopped up boilies, hemp and a small amount of sweetcorn.  As the week progressed and the results did not, I slowly cut this down although I do think all the feed was being taken by the smaller fish.  My rods were the usual 12ft Drennan 1.25lb test combined with Shimano 50000RE baitrunner reels loaded with 6lb line.  The size 16 hooks were tied using 4lb hook link material in a helicopter style approach. 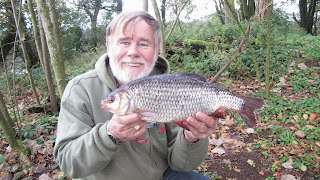 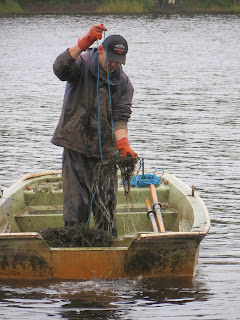 My first roach went 2lb-9oz and fell to the Source boilie this giving high hope of what was to come.  The same night Wyn took a 2lb-12oz specimen and we felt it was only time.  The next night saw just one weighed fish of 2lb-1oz to Wyn again and although plenty of roach up to the mid 1lb range were taken there was little sign of the 2lb+ fish.  The next night saw me get a 2lb-6oz fish while Wyn caught yet another 2lb-12oz roach.  At this stage we were still hopefully that the constant baiting each day would see the bigger specimens appear but for whatever reason that was it and the following days gave less and less result even from the small fish. 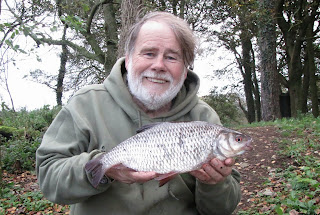 I am at a loss as to why this should have been as the weather was mild although wet, and all else seemed to be in fishing’s favour.  Both Andy and Matt are hopeful of a return to try and even the competition between themselves and the fish but time will tell.
Posted by Travelling Man at Sunday, October 27, 2013