Following our last trip to Lochnaw Castle in June we had determined to return and that time came last Saturday.  We expected the weed situation to be worse and in that respect we were not disappointed but there were swims available to fish and after arrival John Found, Pete Reading and I were soon settled in place.  Pete’s swim was ready to go having been dragged by Kevin a few days previously but John and I were to fish in adjacent swims and there was a small amount of weed within the first 20 yards of water that had to be cleared.  Once that was done we returned to the lodge for a quick bite to eat and returned for the last few hours of daylight.  I intended to fish through the nights but both of the other two had no intentioned of ‘roughing it’ and 30 minutes into dark they packed up intending to return for first light.  Perhaps they got it right since even by the time they left the swims on the Sunday we were still awaiting the first bite from a weighable fish of 2lb plus.  Odd roach in the range of 1lb to 1lb-8oz were coming to the net but we did not travel to Scotland to land them, 2lb fish were the least of our expectations. 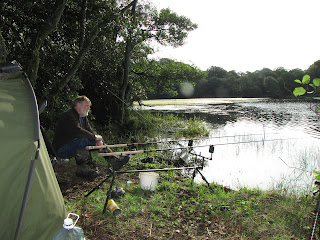 Settled in the swim I wait for the first bite.

Using 1oz flatbed method feeders with 10 mm boilies, sweetcorn or dendrobaena worms we fished away but sport was comparatively slow.  On Monday it did pick up in that I took the first fish at 2lb-14oz to put a 1oz increase on my June best, then John did the same in that he took a 2lb-15oz roach to put a 1oz increase on his June best.  As he commented ‘he would just keep one step ahead of me.’   Then we brought the total weights level in that I had a 2lb-9oz specimen and John followed up his fish with one of 2lb-8oz, honours even for total weight but he has the biggest- I was not that envious! 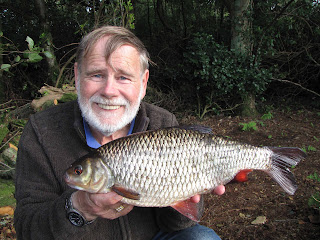 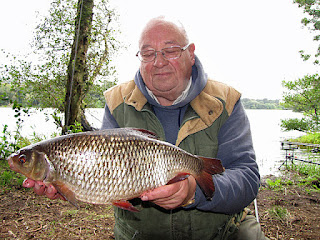 The wide angle lens gives a ver good view of this 2lb-15oz beauty.

The following day I had a nice brace in the early morning feeding spell when in quick succession I took beauties of 2lb-13oz followed by a 2lb-14oz.  We now had what seemed like a pattern developing, perhaps one and a half hours of feeding spell just on dawn, nothing in the night and again perhaps one hour at dusk.  Although a couple of fish were to be caught in the middle of those hours they were few and far between. 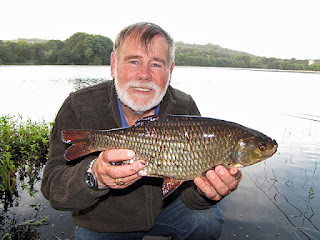 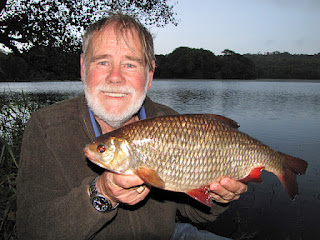 2lb-13oz and one of a pair that morning.


Wednesday saw John take our largest roach of the week with a superb specimen of exactly 3lb but sport remained patchy to say the least.  Pete joined in the fun with a new still water personal best roach of 2lb-14oz and several of these sorts of weight were to come to our nets, it was a fact that all the two pound fish we caught were in fact over 2lb-8oz. 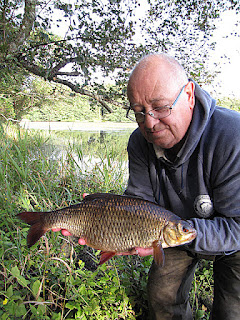 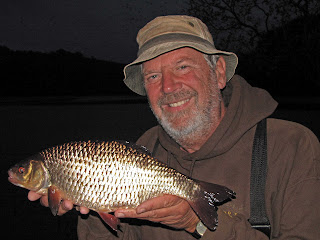 In general our results were pretty consistant with John’s 3lb fish at the top followed by two of 2lb-15oz, four of 2lb-14oz and several others close behind.  We of course tried several variations of rigs and bait combinations but nothing seemed to break the slow middle of the day.  Put a worm on and we caught little perch, but even the small roach seemed missing in the previous numbers we had experienced.  One possibility is that the fish have spread out and are spending a lot of the day in the weed beds only coming out at the times we were catching. 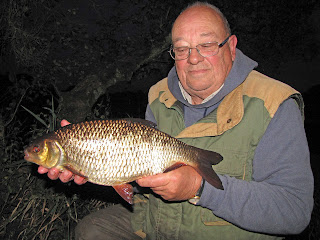 John being greedy with his second 2lb-15oz. 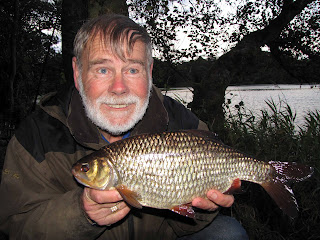 As with all breaks the end of the week seemed to race up on us, we finally had to pack out tackle away on the Saturday morning with just one 2lb-10oz fish coming to my net in the short early session I managed to cram in.  Plans are already in place to return and hopefully I will get the 3lb plus specimen on that trip but the wait makes it all the sweeter when the target is finally achieved. 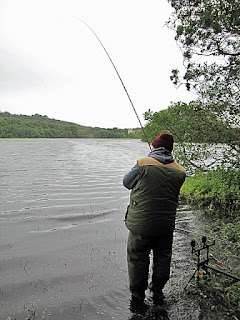 John plays a roach with the castle in the background
Posted by Travelling Man at Sunday, September 09, 2012