A great session on the River Wye with friends.

I’ve not posted for longer than my usual time frame because there was nothing to report.  I could have used my talk at Tamworth, it had been arrange by the Mercia Group who control a number of waters in the area and done in aid of a local hospice, it went very well raising lots of money for a very good cause. 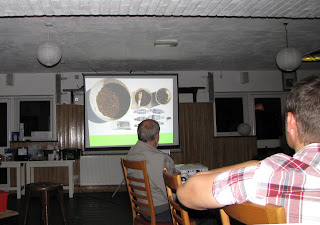 I tried for barbel on three occasions, twice on the River Tame and once on the Lower Severn, chub off the Severn but no barbel and total blank on the Tame, not much to write about.  The Severn was very low and clear as tap water;  the Tame just gave problems with drifting blanket weed coming down river at a slow pace that needing to be cleared off the line at frequent intervals.


Then on Friday I went to the River Wye and at last I got fish.  Two friends, John Found and David Cook were in the area with their wives, so we arranged a meeting to fish together for a couple of days they having spoken nicely to the ladies.  Having already pinched a few sessions on the river John had succeeded in spades with a rare Wye double of 11lb-4oz, a new best for the river by a mile. 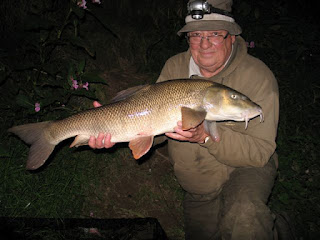 It seemed that most of their fish had been caught between 7pm and 10:30pm, although the odd specimen had come in daylight including the double though the flash shot makes it look dark.  I could not wait to get on the section as it was my first visit with a new book.  Pellet had been the bait of choice for the lads and of course I used that on one of the two rods I would fish with.  The other carried a Monster Crab boilie but I did not introduce any free offerings on that and it was left to fish on its own with just the usual pellet/hemp mix in the feeder.  On the pellet rod, I laid out a bed of hemp and fished that as my main suspect to catch, but the barbel obviously did not know that and time after time it was the boilie that caught.  The swim chosen on the first evening allowed the two rods to be safely used in dark, but the second swim fished the following evening was too tight, and I dropped to one rod using the boilie of course since that had caught every fish coming to my net. 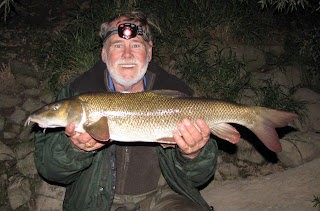 8lb-4oz best of the first day. 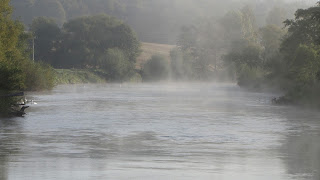 Misty start on the Wye 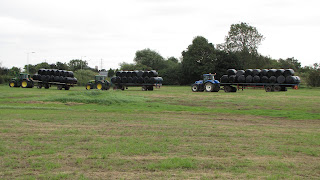 This farmer is well prepared for winter.

The signs of autumn were all around and with cooler evenings and early morning mist I wondered how much longer the barbel fishing would be a viable proposition, perhaps just weeks but maybe there would be a lot more time to catch these fighting machines.  As usual these Wye barbel tended to be long and lean and pound for pound they do seem to fight so much more strongly than on most rivers being very reminiscent of the fabled Teme Tigers.  Just before dusk on the second evening David hit gold in the form of his first double figure barbel, John checked the weight and declared exactly 10lb, fantastic! 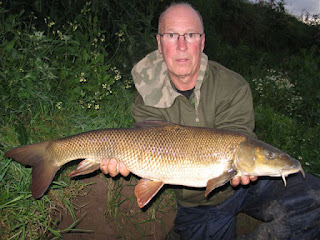 Very nice shot of Dave's 10lb pb
I finished with ten barbel including a  7lb-14oz and three others over 8lb to a best of 8lb-10oz, definitely a result on this river and I will return to try again to get another double to top my best of exactly 10lb, the same as David’s fish. 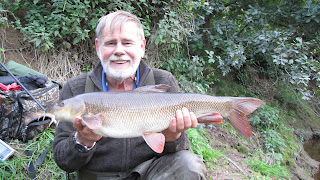