With the rain we have had this last few days all the rivers are now very high and some had been heading towards record levels.   This seemed a good time to check out the local tench to see whether they are still carrying spawn, if they are I could perhaps catch that prize of a double figure fish.  With this in mind I contacted Leo Heathcote and we made plans for a 6:00am start on the Saturday, going to the estate lake where I had taken a brace of 9’s just before the trip to Scotland.    Conditions seemed quite good for tench fishing.  A slight ripple to break the surface of the lake and it was very mild although rain had been forecast for the afternoon.  I had arrived to find one other angler already fishing, but he reported no action so no help there.  I would be using an inline maggot feeder with a short hook link and a couple of maggots on a small hook, I had been thoughtful about the possible weed that might have grown since my last visit, but it was still fairly sparse so no problem there.


Being a social to catch up as well as fishing, it did give a chance to chat about past events and future plans, this passing the blank hours as the tench declined to cooperate in out attempt to catch them.  Another angler who we knew came and we invited him to fish in the immediate area but although he was using totally different tactics he got the same result, a blank.  He did advise us that as of the previous Wednesday he had been catching tench still carrying spawn so there is every possibility  there is still a big fish about and this was just one of their moody days.


The rain came as promised and not long afterwards we decided to call it a day and we left the sole remaining chap who was going to fish until the 7pm sort of time, I hope he was rewarded for his efforts.  Depending how things pan out I will return later this week to try again, you never know what fate has in store.


Last week I had made plans with Ryan Tippet to have an afternoon fishing the River Severn on the Sunday, I checked the local conditions with him when I got home after tench fishing and he said that although the river had broken its banks in many places it was still fishable so the trip was still on.   I arrived about 2:00pm and set off on the walk to the swims that were still fishable in flood conditions.  Many of the normal fishing spots I passed were well under water with the river coming way back behind the normal tree line.  Bearing in mind the normal level would be many feet below the bank and it requires the angler to climb down to the swim, it gives credit to the EA river line that gave the height at 5.21m above normal level.


With a river in flood you have two main options, use a very big lead and cast into the main flow trying to hold out there, or use a lighter lead and cast out with the intent that the lead will swing into the base of the bankside and hopefully some barbel will be searching for food there.  In extreme conditions you can even take this approach one stage further and cast onto the bank that is now under water, here you may well find fish out of the river taking advantage of this new area of food supply.   I chose the lighter lead option and put on a 2oz bomb to hold the meat offering down at the bottom of the 16ftplus of water that now rushed past in front of my position.


Next time you are on the river bank give some thought to these conditions, put a flood into your mind and try to figure out where the river will have moved to.  Find a high spot where you can get close to the normal course of the river and look for the bankside snags that would now be under water.  This way when you arrive in a flood you know exactly where to fish with the least amount of hassle, it is annoying to think afterwards what you could have done to make life easier.


Fortunately I was familiar with this section of the Severn and I could choose a suitable swim with the best chance of no problems when I retrieved the tackle after each cast, and I began fishing very hopeful of success.  The river at this spot was literally with two inches of the top of the bank, but that is as good as a mile and my feet were dry rather than many of the swims where I could be in a foot or more of water.   The sun was shining as it should in mid-July and the top coat, hooded top and jumper all came off as I roasted in the afternoon sun but those fish refused to oblige in taking the meat offering.  The rain came in short, heavy showers that would have drenched me if I had not taken the umbrella along but they soon passed and the sun was out again.  I noted that a lad on the opposite bank had caught a couple of barbel and when he caught the next one I decided to follow his example and cast further out into the flow. 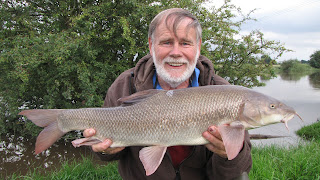 Long and lean at 8lb-15oz off a flooded R. Severn.


Unfortunately not expecting to cast into heavy flow I had reduced my tackle down for the long walk up to the swims and hence I had no big leads with me.  Never mind, a 4oz and a 3oz were clipped together and these were cast out more towards the middle.  The difference was obvious, now the rod bent over with the power of the flow against the line.  Then as the small amount of rubbish coming down the river built up on the line and soon over-powered even the 7oz of lead and a recast was needed.  A lot more effort than previously required but when the rod finally gave the lurch in response to a taking fish it was all worthwhile.   Not a tremendous scrap but a very long fish finally went into the net and my first thought was it could be another double to follow the one from last week.  Then as I opened the landing net to give a clear view of my prize I could see how slender this one was and doubt came into the equation.  That doubt proved to be well founded as the scales gave a weight of 8lb-15oz, but this fish will certainly go well into doubles at a later date, hopefully I’ll catch it again at that time.


I left the river later that evening with just that one fish, feeling I had somehow missed a chance and equally thinking to return in a few days as the river dropped a foot or two.
Posted by Travelling Man at Monday, July 09, 2012