With all the rain we have been suffering it seems that there will be no summer for those going on a normal holiday, but for the barbel angler it is a permanent holiday.  Every day you have perfect conditions with high water and no rubbish, since that has been cleared by the constant high levels.  I had been sorting the new van out and missed a few days, but those conditions demanded that I fish so I made my way to the River Severn to sample what that lady luck had in store for me there.


It rained, no surprise in that since it seems to have rained every day since I came back from Scotland.  At least the river level seemed to be falling since the banks showed signs that the level had been at least 4ft higher, the problem that gives is the muddy silt it leaves behind over everything.  Swim selection on the big rivers like the Severn is mostly by chance or previous experience.  I used the second choice and dropped into a swim that had previously given me catches of up to ten plus barbel on the day, but that was in bygone times and now I would be happy to catch any barbel.   My plan for the day was to use a mix of both my recent tactics in that I would use the bait dropper to load the swim with hemp, and then use the big feeders with a mix of hemp and pellet to attract the fish into my feeding area.  Casting about five rod lengths out into the powerful flow, I had a 5oz feeder in use since it is important for it not to move once it has landed.  At other times I might want the bait to roll round into the side but normally in that situation I would not be using a feeder since I only want my baited area to be in one spot, not an arc such as would be left when it rolled around.  The hook bait was to be a boilie John Found and I had made up a couple of seasons ago especially for barbel.  The last fish I caught on this was my River Lea 14lb-10oz beauty and for some reason I did not really use it after then and it has lain in the freezer waiting to see the light of day.  One rod would carry three halves of a 15mm boilie, the other would have just one 15mm wrapped in a paste of the same flavour.


Right from the off I was getting knocks on both rod tops.  There are numerous bream in the section and I felt sure one of these was responsible, but then the rod slammed over and the bite was definitely not off a bream, they cannot move that fast.  As soon as I struck I knew this would be a better than average fish, it bored deep and ran the line off the clutch as it made its way downstream.  I have mentioned previously that for me the most exciting part of fishing is the fight I get off a specimen fish be it a roach or a sturgeon, this one gave full value.  Many of the rivers I fish are comparatively small and they do not generally have much depth, this of course dictates the type of fight you experience.  The River Severn on the other hand in this region is quite wide and has depths of 12ft or 15ft sometimes even more, and that produces a totally different battle.  Even with the extra floodwater the fish had gone upstream and I had to battle it back in front of my position, great and then it tried to get under the fishing stages that were now under water, it all adds to the excitement as there is a chance to lose a monster that has not yet been seen.  Fortunately I got it away from that danger and at last it went into the net and it was safely mine.


Very carefully with all that mud and silt about I made the fish safe in the landing net while I went back up the bank to comparatively clean ground above the flood level and got the gear ready for weighing and photographs.   Only my second barbel of the new season and I thought it would go into double figures again truly an exciting time.  The scales confirmed my thought when it came in at 10lb-10oz, a great welcome back to this mighty river. 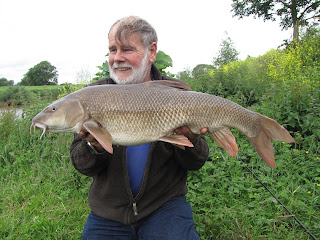 I could not help than reflect on an odd fact that within the 2012 year I had only caught three barbel at this point.   This 10lb-10oz fish, the 12lb-4oz fish off the Dove as related in the previous blog and of course the River Anker record of 15lb-4oz I caught in January.  Three bites off three different rivers giving three doubles, you cannot ask for better than that!  Of course that average could not last and I was brought back to reality with the next capture a couple of hours later when a 6lb barbel came to the net.  I had lots of knocks during the session and although I thought it was bream there is just an outside chance they were off roach.  Lot of swirls had been seen along the inside edge of the river and Curtis, Merv’s grandson had taken a new pb with a 1lb-14oz roach from this section just last week, next time here I will try tactics more suited to catching them to see if they will respond. 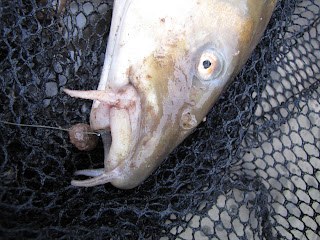 Only 6lb but the hook hold was good.