A barbel session on the River Ribble.

The sun had finally came out but for me it went from one extreme to another, the 14c or so that we have been getting along with the rain is definitely on the low side, but 30C in bright sun is too high for me.   I was pleased to note that the north of the country would be under cloud and as a consequence it would only reach the high teens for temperature.  That was the deciding factor and I soon arranged for a trip to the River Ribble in order to renew my attack on its mighty barbel population.


Midday Monday morning saw me heading the 120 miles up the M6 towards Preston and areas upstream of that town. The motorway traffic was reasonably mobile and a couple of hours later I was on the river bank looking at a low and settled river, time for some serious fishing.  This is my third trip to the river and the previous two were made in the colder months, would the warm weather favour my efforts, time would tell.


I’ve been fortunate in that a number of local lads have offered help in the form of conditions and sections of the river that have been on form, obviously it has been bit of a lottery this season with floods seemingly coming every other day.  A local bailiff, John Monaghan has been a real help since he lives right by the river and obviously has his finger on the pulse of local conditions and results.  With a new addition to the family he has not been out quite as much this season but even so when I met up with him he was a mine of information and I had soon decided on my swim for the next 24 hours or so.


I would be fishing off a pebble strewn bank that extended into the river and without the help previous warnings this could be a situation waiting to give problems as you will read later.  Travelling anglers like me are not aware of local river conditions and the lower end of the Ribble has one bite in the arse that would catch me out every time, it is tidal.  You’re sitting there looking at your rod tips high in the sky and before you know it your feet are no longer on dry land, the tide has come upstream like a silent assassin waiting for its target.  The rise can be from a few feet to several feet and obviously it happens twice a day so if you are fishing at night it can be even more of a problem.  Following John’s advice I had arrived just after the tide had turned in the mid-afternoon so when I settled into my swim I could watch as the water level receded back to its normal position. 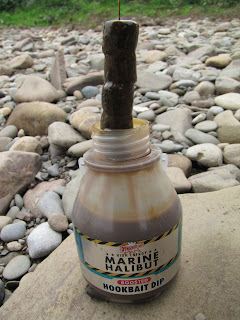 A glug for pellets to help flavour and time in the water.

I bait dropped the hemp and soon had two rods out, one on a 14mm halibut pellet and the other on a boilie.  I would be using a dip for the pellets and this has a twofold effect.  First it obviously increases the pellets attraction with all the extra flavours that will leak out over the time it is in the water, second it also extends the time it takes to break down and hence it can be left in place that little bit longer.  I did not have to wait too long before I hooked into my first barbel of the trip, at 5lb or so it was not big, but even so it still put up a reasonable scrap on its way to the net.  It did not take too long to realise the school holidays had begun and I was not alone on the bank!  Kids of all ages walked, ran, some took the dog along sometimes on a lead, but most times not, you name it and they were there.  Being on the exposed pebble bank they left me alone, but those fishing the main bank had lots of problems mostly from the dogs in their tackle and bait.  My next fish really had me thinking I’d got the double as it powered back and forth in front of me and even as it came over the net my eyes still saw a potential double.  Unfortunately I had the same problem as often occurs and the scales knocked  1lb-8oz off my eyes and gave a weight of 8lb-8oz still a pleasing fish being in summer condition, long, lean and full of fight. 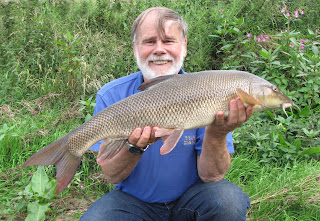 
Two more fish followed that one although I lost one when I got cut off on a rock, easily done on this river.  All these fish had come in daylight and even though I fished towards the midnight hour no more pulls occurred, so I retired to the van quite pleased with the afternoon’s results, roll on tomorrow morning.


With not enough sleep I was up early and on the banks again but throughout the morning nothing happen, not a knock.  With the tide due at 3.30pm I would have to move back off my swim and I wondered if perhaps it was the after tide effect that had given me my results of the previous day, but then with an hour to go the fish turned on and I took four barbel in quick order before I needed to move.  Two of these came together and to anyone watching it would have been a little bit of a comedy.  The first fish was being played and giving quite a good account of itself, during the netting I knocked the second rod off the rest when I swung the net around to put the fish on the landing mat and I had to leave the rod lying there while I dealt with the fish.  Having removed the hook I put the net and fish back into the water’s edge whilst I got the scales ready to weigh him and I thought to put the other rod back on its rest.  As I approached it I could see it was wrapped in a curve and line was being taken off the free spool.  In the time it had laid there a fish had taken the boilie and was making its way downstream, fortunately it had not snagged and I went on to land a second barbel into the net to join the first.  At 7lb-13oz and 8lb-4oz they made a fine brace and I took a quick shot of the pair before I’d weighed them since I returned each as soon as the weight had been confirmed.  Another advantage of the lower temperatures up north was that all the fish went back without any hesitation rather than the extra care needed on days like we are having now in the south. 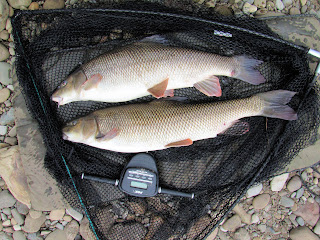 A nice brace of barbel.


With the way things had gone I decided that with no plans made for the rest of the week I might just as well stay here and so with the intention of trying another swim I went back to the van for yet another night.  One very useful advantage of a nearby trading estate is the use of a wash room for the toilet and a quick clean up, not always easy on the bank but nice when it can be done. 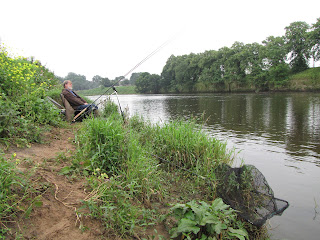 The last day's swim on the Ribble.


The following day was fairly quiet with a few small chub that broke the hours of waiting for a barbel, then a 7lb fighting machine appeared that saved the day before I packed up at 6:00pm.  There was an interesting event in that there was a salmon angler fly fishing about 200 yards above my swim and he had left his tackle on a similar beach to that I had fished the previous day.  Standing right out in the river with chest waders I was sure he would be aware of the incoming tidal surge but he made no moves.  At this time I was chatting to a local lad who had come along to see me and we watched as the level came up and then went nearly over the beach that held his gear.  In the end I shouted at the top of my voice and indicated for him to look at the bank and he seemed to acknowledge the call but still made no move so I assumed he had all in hand.  Ten minutes later he was wading through the water along the nearside bank in order to retrieve tackle that was being washed away.  Strange, since I would assume if you’re up to your bollocks in the river you are well aware of the rising levels, it seems not! 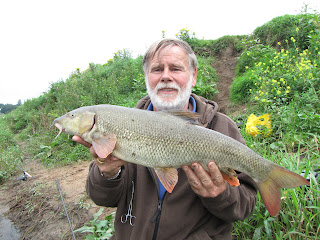 Last day specimen to save the blank.


That was it for the session in the north and with eight barbel landed and one lost it was an acceptable result, there is always another day or days to return and try yet again for that different river double, this target has been set but not yet achieved, but it will be!
Posted by Travelling Man at Thursday, July 26, 2012