Tench from a new water.

Following the success of 52 tench in 5 days fishing a total that included two 9lb’s, three 8lb’s, and loads of sixes and sevens I decided on a change of venue for one last fling before the Scottish trip.  Staying in the local area I chose a new water to me but one with a bit of a reputation for the odd good fish, say 9lb plus but maybe a very rare double, that would do, but first I must catch my first tench from the venue. 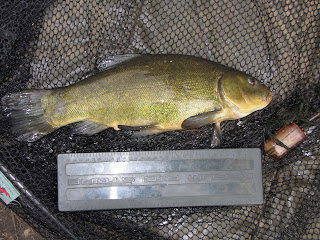 Small but the first and always worth a photo.

Arriving early in the afternoon I set about choosing a swim and decided to fish alongside one of the many islands about the lake, little did I realise the problem about to rear its ugly head.  As always when approaching a new swim let alone a new water, I cast about with tackle that includes a hook in order to detect weed, no problem there the bottom was covered.  Not the new growth of one of the seasonal weeds that can cause a problem, this was heavy blanket weed that remains throughout the hardest winter.  Cast after cast was made, probably over thirty in total before I had located two spots that did not seem quite as bad.


With the swims sorted I could get the tackle ready and I would use the same gear that had done me so well over the previous sessions.  This would be one rod on a flatbed method feeder with artificial buoyant corn, and the other using an inline maggot feeder, again with a single artificial buoyant maggot topped off with two or three natural companions. 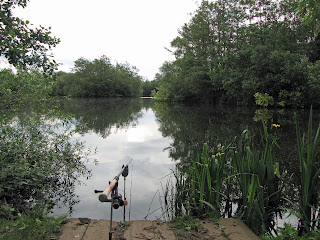 Great weather for fishing, reasonably mild, flat calm, overcast, though slight rain came in the late evening and it poured down just after I packed up.  The lake itself gave a superb view as I waited for some action, that did not take long but it didn’t last very long either as a probable carp ran me quickly into a close-by bush lying in the water.  That take came on the corn and it also produced a roach of about 10oz.  Fortunately for my current run of good luck I also landed three tench on the maggot to a pleasing weight of 6lb-10oz, not bad for my first visit though it will not be the last. 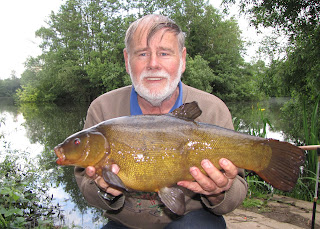