A great time with big tench, bream and carp.

I am sure that like me you often leave home and you are going tench fishing,  or maybe perch fishing, perhaps a day after roach or bream, but how often do those plans go astray and you are lead up the garden path by other species than your target fish of the day?


Tuesday and Wednesday of this week were such days for me, I went tench fishing and did indeed catch some very nice specimens but it did not end there.  On the Tuesday it all seemed to be in my favour, got there about 6:00am and dropped into a swim with the wind blowing into my bank.  I had already decided to fish two totally different methods on the two rods I would be using.  The first rod would have a double hook rig with the maggot feeder on it and the usual short hook-link size 12 Pallatrax hook to carry an artificial maggot along with two or three natural maggots as well.  The second hook would have a couple of Dynamite shellfish 8mm boilies attached since I’ve had occasions where the tench have gone really well on that bait.   The second rod would be set up with a flatbed method feeder and the bait would be a single artificial grain of red sweetcorn.   Using these method feeders it is simple to embed the corn into the method ball by placing a layer of the method into the mould and pressing the feeder into it to get a nice compacted bundle.  Now you lay another shallow layer of feed in the mould again and placing the hook bait on top of this layer you compress the feeder into this and you have a slightly larger compact parcel that includes the bait inside it.  A big advantage of this is that it casts like a bullet and cannot tangle; it will also sit on the top of a weed bed to present the bait cleanly to your target fish. 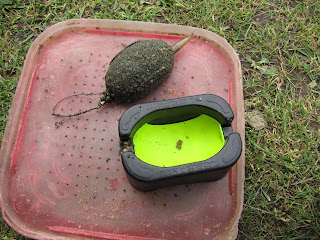 Method ball with bait inside.

I was soon into the first fish of the day and this proved to be a small male, it is quite annoying to keep getting these little blighters where a 5lb fish is a good size and fights well, but those females are so much bigger.  That came on the method but when I hooked the next fish on the feeder rod I initially thought ‘this is the one.’  Then it kept on going, slipping the clutch like a wild banshee on a rampage and I soon realised I had hooked one of the lakes big carp.  The fish did put up quite a good show and with lots of water to go at it made good use of it, fortunately normal tench tackle is still quite sturdy and as long as I did not run out of line I could eventually land even the biggest of the lakes residence carp though at 21lb-4oz this was well short of that fish.  My silver bream fishing early this year had produced a 20lb plus carp, and now my tench fishing had done the same, best of it is I don’t carp fish, it is the only one out of all our coarse fish that I no longer pursue, even my pb English carp of 37lb came on tench gear with two maggot on a size 14 hook. 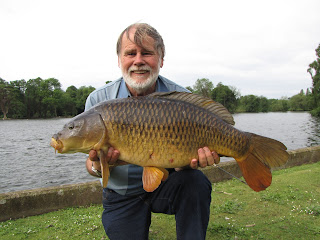 The carp had taken the white boilies and although I did take a further three tench on the maggot hook with the maggot feeder rod, it was the other set up that saw most of the remaining action.  I had noticed that this rod was casting its bait into an eel grass weed bed and I took care to keep within that area.  Tench after tench came to the bank, a 6lb-15oz fish was beaten by one of 7lb-8oz and then a 7lb-2oz went into the middle of these with the total tench for the day finishing at 8 fish.  That was quite a good day’s result, but it did not end there and in between the tench I took two sizable bream with the best one tipping the scales to 6lb-13oz, not my usual stamp of bream but pleasing never the less.   So with tench, bream and carp all hitting my net whilst on my ‘tench fishing session I realised that no matter what we might think we are fishing for anything can and usually will happen! 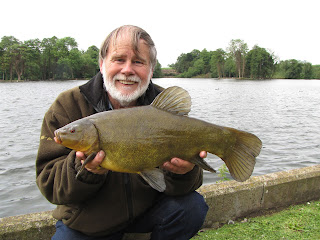 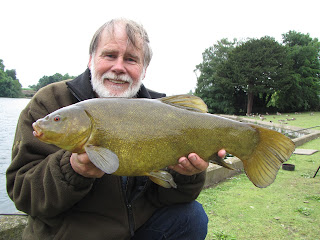 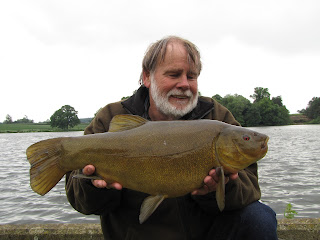 Day two saw me back at the lake to try again for the bigger tench that so far have eluded my efforts.  This time I went with the method feeder on both rods using the red corn as bait since this had proven to be so successful the previous day.  It was the same wind but noticeably warmer, the previous day having been decidedly chilly.  With heavy showers forecast I had put the shelter up and this proved a wise move but the fish seemed to take pleasure at giving a take right at the moment of the heaviest downpour.  Today followed the results of the previous day with both tench and bream coming to the net.  The tench topped out just short of the 7lb mark but the bream went bigger with two samples of 8lb-8oz and 8lb-11oz.   Pleasing fish since the water has not been known to produce double figure bream as of yet and these were spawned out fish capable of hitting that figure with the extra weight the spawn would give, maybe next year will see them do it. 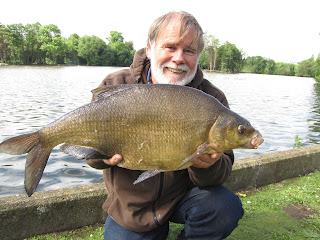 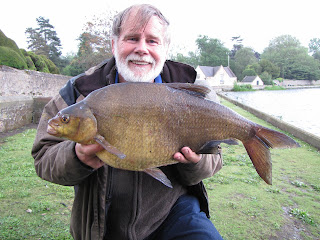 I ended the day with four fish of each species and I left with that bigger tench still on my mind as I thought in those famous words ‘I will be back.’
Posted by Travelling Man at Thursday, June 07, 2012