Merv's grandson, Curtis, has caught many good fish under his grandfathers experienced hand.  This has been done in such a fashion as to ensure Curtis does not catch monster fish at too early a stage in his angling lifetime, and each new personal best fish of any species is fully appriciated.

Currently his best barbel is one of 7lb-8oz, a fish caught from Makin's Pools at Wolvey, his best river barbel took the scales to 6lb-7oz and that was caught from the River Wye.  With the schools on holiday it seemed a suitable time to see if I could help him improve that target weight, and hence off we set for the river.

As with all rivers at the moment, it was very low, and running almost completely clear, even tap water might just have had a bit more colour to it.   Tackle was as I use on most occasions for barbel on the smaller rivers, a Drennan 12ft, 1.5lb test rod and a Shimano 5000RX reel loaded with 12lb line.  The hook-link is made in two separate parts, 10 inch of of 15lb Pro-gold acts as a stiff boom preventing the 6 inch of 15lb braid from tangling on the cast.  A size 8 Drennan Continental Carp hook is tied with a knotless knot leaving a 1 inch hair to take the chosen bait.  Of late I have had considerable success with 8mm pellets fished on the hook, along side a pellet loaded open-ended feeder, the pellets in this having been dampened to hold with an equal amount of cooked hempseed, not too damp since the pellet mix will go into a sludge-like consistancy.

With the swim chosen, a deep pool following a fast, shallow, run - I set Curtis the task of casting into the point of the flow where it settled down to a steady pace,  the rod then placed into the rest, we sit back to wait for action.  Young or old, this is where we anglers spend so much time, you can watch the river and its life go past waiting for the bite that announces the fishes arrival, indeed we watched as a dreaded otter swam across the river just at the bottom of the pool we were fishing.  That did give me some concern as I thought he might have disturbed the fish within out swim prior to our arrival, but shortly after seeing him the rod slamed over and Curtis was playing a nice barbel that proved to weight 4lb-14oz.   Knowing we would not blank takes a little concern off my mind, and just after that a 3lb-9oz chub gave Curtis the mixed species bag that so often happens on the rivers, neither fish was big, but Curtis was delighted with that result 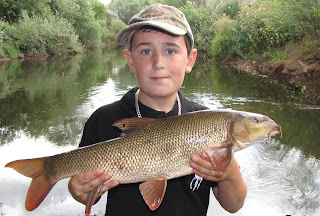 Then the next bite resulted in a far better fight, and Curtis with almost profesional ability handled it well, keeping it from reaching the snag just to our right.  It bored away into the deeper water in front of our position, but eventually it gave in to the presure and it came to the waiting net.  Let it rest after that good scrap in the hot weather, and then the scales came out again.  This time they showed a new personal best for barbel at 7lb-14oz, Curtis was delighted and with appropriate enthusiasm of the young, he soon had the rod casting a bait out again for another hoped for chance. 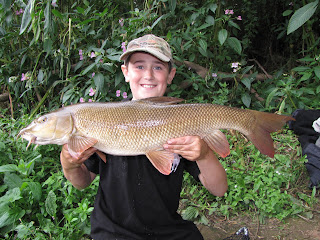 It seemed to go quiet after that fish, and we sat for a few hours with no more than the occasional knock on the rod top from a suspected chub, then about 6.00pm the rod went over again and the strike met with solid resistance followed by the clutch giving line at great speed.  I leaned across and tightened the rear drag slightly and then battle commenced.  Again curtis played the fish well taking advice as it was given, but this fish had a mind of its own, and with little that could have been done it got snagged just to our right.  Curtis has not yet the experience to deal with this so I took the rod to show him how I would approach it.  Push the rod out as far as possible and try pulling in different dirrections, open the bail arm and see if the fish can take line, sometimes they will even swim out of the snag at this stage, but not this time.  This went on for some minutes with the line running back and forth over the snag as the fish took line, and I gained it back again, then he came free.  I quickly passed the rod back over to Curtis and I could now see that this barbel was quite a bit bigger than his previous capture, dispare followed that initial excitement at its size, the line broke!  That snag had done it damage, and Curtis was left to consider what could have been. This unfortunately is a lesson we all learn at some stage, sometimes the fish win the contest, hopefully not too often.

With a final total of three barbel to that 7lb-14oz, and a couple of back up chub it went down as a successful day, there is always another chance to get that big fish and curtis will certainly be looking forward to the chance.
Posted by Travelling Man at Tuesday, August 09, 2011