River Barbel in the sunshine.

With the rivers at near record low levels and running as clear as tap-water, it is easy to think you will not catch the wary barbel as he swims in full view of the passing anglers.  Have you thought, "I'll come back this evening and try for them" even to the point of believing you need to night fish to stand any chance?  Well take comfort in the thought that they can be caught, I do it all the time: sunshine or rain, clear blue skies or cloudy, daytime or night, the barbel can be caught at anytime, you just have to believe it and fish confidently.
My fishing this season has been almost exclusively based on 8mm pellets fished with open-ended feeders and this has produced plenty of barbel for my efforts, this time on a trip to the Teme I would take hemp and casters, a combination supreme in catching fish under the right conditions.  The conditions that would meet me when I arrived on the banks would certainly include some of those requirements.  Low river, good temperatures to encourage feeding and I knew a couple of swims that held a few barbel and chub.
Heavy rain had been forecast and by the time I had completed the long walk up to my chosen swim it was as if I had walked through a rainstorm, I was soaked with sweat, no rain - just strong sunshine.  Dropping down the bank into the swim I could see the river was even lower than my previous trip, and it was very low then!  I had brought along two pint of casters and the same of hemp, now my first task was to bait-drop perhaps ten or twelve droppers of a mix of these two into the swim.  It was now mid-afternoon and the sun was over the bank facing me, with those steep banks that form so much of the Teme Valley it meant that close to that bank was in shadow.  Not too important, but I decided to use it to my advantage and I placed the bait within a couple of feet of the bank in 5ft of water.
No rush to cast out and I took a walk along the river in a search for other fish perhaps ready for another trip, useful in that although I'm not on the rods I'm still effectively fishing.  Going back to the swim I could have bait-dropped and waited yet again, but having come late in the day I was happy to begin with a rod in hand.  Just two additional droppers were introduced and then I cast the bait across into the swim.  The end tackle was 12inch of 15lb Pro-Gold mono attached to 6inch of 15lb braid with a size 16 Pallatrax hook, these hooks are large for their stated size and this would be more akin to a normal size 12.  Two artificial casters are on the hair and I put a further two natural casters onto the hook itself, often the small fish will quickly decimate these but the artificial baits are always acceptable to the barbel as they grub about in the feed laid out for them.  I did not wait too long before the first barbel was being played and as always the fight was spectacular.  At 9lb-5oz a very welcome fish and it proved the point that barbel could be caught in bright sunshine.  A further two barbel and a couple of chub also came to the net for a most enjoyable session, here's to the next trip irrelevant of the weather. 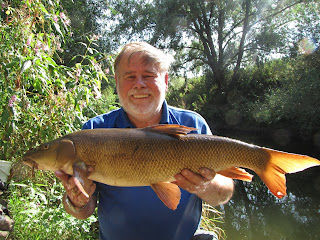