Travelling to overseas fishing holidays can be something to look forward to, if it is to be a still water venue you know what to expect within certain boundaries but with rivers the weather can have a major effect.   Travelling with my usual companions for the Spanish roach trips, Pete Reading and John Found we knew the forecast was for rain on the Monday after we arrived late Sunday but we could only wait and see the effect.

Sunday evening is a time to settle in, get a bit of shopping done at the local supermarket and get a meal at the favourite café, here we meet up with our Catmaster Tours guide for the week, John Dekin though we mostly look after ourselves.  He had checked the local weather forecast and advised the river would both colour up and rise by late Monday so things did not look that good for our trip.  Anyway we could do nothing about it so it was a case of finishing the meal then retire to bed. 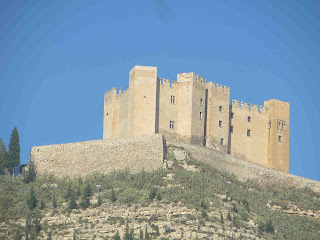 Rooms with a view over the town

As dawn broke about 7:00am we were stood on the banks of the River Segree choosing to fish swims that had produced well for us on previous trips, tackle comprised of quivertip rods with 6lb to 8lb main line and suitable hook length material.  We use swimfeeders loaded with either pellet or sweetcorn both of which had given good results but we need to find out which is best on the day.  As it turned out the rain started and after three hours without a bite we decided to give it best as by now the rain was torrential.  We packed up and drove round the venue to seek out potential areas should the river become unfishable.

The following morning our worse fears were realised, one look at the river and with a 20ft wide continuous weed raft coming down the middle of the flow we knew that no roach fishing, and very little other fishing, would be done for days.  Fortunately with our previous days look about we had other thoughts and we quickly made our way towards the dam.  With the Top Lake very low at the end of the summer there was very little water being allowed through and it was at least fishable.  Our first choice swims were already taken by a couple of carp anglers but the advantage of fishing for roach is we could slot into swims that carp our cat anglers would struggle to use and hence we did just that.  A very big attraction was that there were dozens of roach showing on the surface in the early morning light, all we had to do was get them down to the bottom of the 25ft or so depths and feeding on the corn/pellet offering.

Once fishing we tend to use a lot of sweetcorn in the feeders, two to four cans per day are the normal and this will attract the roach into the swim and by and large hold them there.  We were each catching a fair number of roach with quite a few over the 1lb-8oz mark but that first day only saw one fish over the 2lb mark this falling to John at 2lb-7oz, a beautiful immaculate specimen. 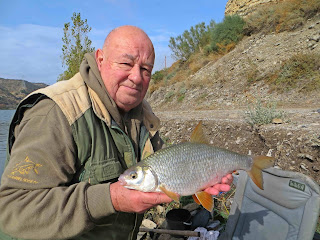 With clear fishable water at a premium we dropped back into the same swims the following morning and continued to catch the roach but struggled to get over the 2lb mark.  If our scales had been just a little bit out we could have called many of the big 1lb+ fish into the 2lb range but at least Pete saved the day with a fantastic 2lb-10oz rudd that equalled his English best. 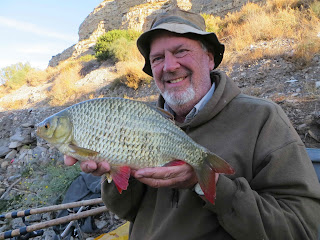 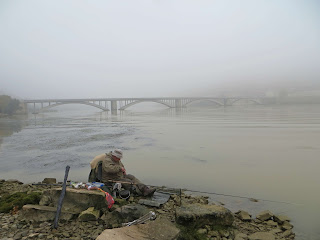 It can be quite rocky here.

The days past by very much the same with just the odd 2lb roach showing, John had a red letter session in a different swim where he took five roach over the 2lb mark, a 2lb + rudd and a number of gibel carp [a continental version of a Prussian carp] to 3lb 10oz.  All the while we were hooking the king carp on the sweetcorn but the best that was landed fell to John at 16lb-10oz.  Most of the time the carp would run the bed of the river and catch the line on rocks, zebra mussel, or Chinese shellfish and the result was always the same, a lost feeder.  Between us I think we lost the best part of twenty feeders and the local tackle shop loved us. 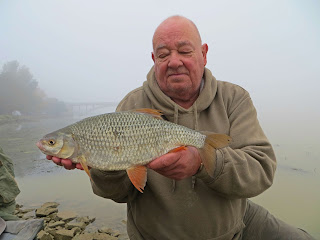 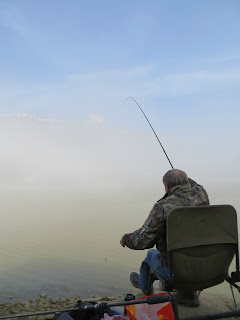 Thick fog on some of the mornings.

By the end of the week we had got a reasonable total of twelve roach over the 2lb mark, John’s 2lb-9oz caught on the last day took the honour of being the best, Pete’s best just behind at 2lb-8oz and I followed up with a 2lb-6oz.  The rain on the Monday had caused major problems and even at the end of the week the Segree and Ebro down from the junction were almost unfishable.  Not sure of the results for the other lads but did hear of carp to 35lb and a cat over 190lb but many of those fishing really struggled. Better luck next time we hope. 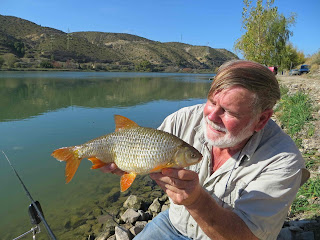