Monster perch and other bits.

For a few seasons now I’ve tried to improve my perch personal best of 4lb-4oz taken from Wilstone Reservoir in 2003, the nearest I’ve come to that ambition is a well spawned out 3lb-15oz fish that would easily have beaten the target just days previous to my capture of such a brilliant fish. 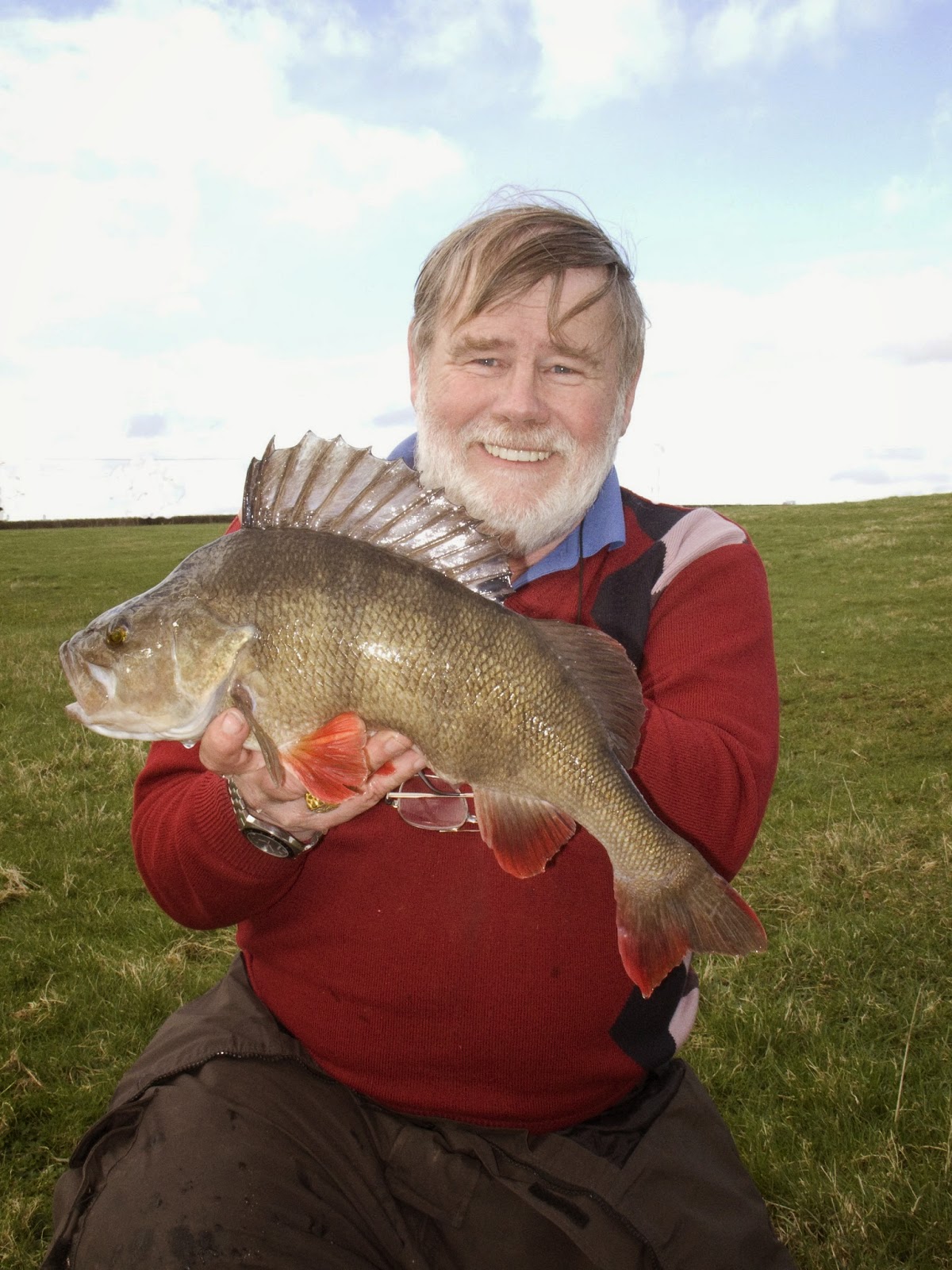 Currently we seem to be in a vein of waters producing large perch and here I talk of 3lb plus being a large fish.  Most specialist anglers will fish for the day and if such a specimen comes within their catch they will feel it has been a successful trip, often such a fish will be joined by others of a similar weight since they do shoal together in an age group of their companions.  Many tactics can be used for the perch and the recent popularity of the drop-shot techniques has definitely led to an increase in the reports of large perch from our canals as well as other venues around the country.

In recent times many of the venues that were giving up a good standard of perch to my efforts seemed to have come to the end of their cycle.  It would seem that unfortunately perch are one of the shorter lived specimens that we pursue and once they get to and interesting size they do not stay around for too long before Mother Nature makes a claim on their life.  One advantage for me of the drop-shot rage is that it had shown the potential of many of our Midland Rivers and I felt I should at least try to take advantage of that before this age class disappears yet again.  All too often I have been involved in other target searches and though I would fish for the perch on another occasion only to find I tried too late, this time a strong effort over the later part of the season would hopefully produce the goods.
Arriving at the venue I chose a section that had a reasonable amount of cover on the nearside bank, this had given a number of slack areas downstream of their obstacle and the one I chose to concentrate on extended over some 15 yards or more, plenty of space for the perch to hunt in.  I had decided to use a quivertip rod rather than the float since it would give me more chance to flick the lobworm bait into little gaps and the outside edge of bushes.  A 2oz quiver on a Drennan Medium Feeder rod and 6lb line  to a size 6 wide gape hook gave plenty of power to beat the size of fish I hoped for, that being a 4lb plus  specimen.

I dropped into the first choice swim and cast right down to the bottom end of the slack.  Then I began feeding red maggots into the head of the swim, these slowly went downstream on the slight flow that still existed within the slack area.  My idea was to very slowly retrieve the lobworm by turning the reel handle just one turn at a time to cause the quiver to bend right over and then return to its original position.  I kept repeating this action every minute or so and in my mind I felt this was akin to the action of a slow motion drop-shot method with a moving bait to attract attention of the prey fish.  It was with some surprise [though I’m not sure why] when after several of these turns of the handle the quivertip straighten and then almost immediately pulled round again.  The pull round was nice and steady; I returned the favour with a nice and steady strike and pulled into a good weight of resistance.  Over the previous days we had been getting quite hard frosts overnight and I can only assume these were the possible cause for the comparatively poor scrap off this monster fish that came into the net. 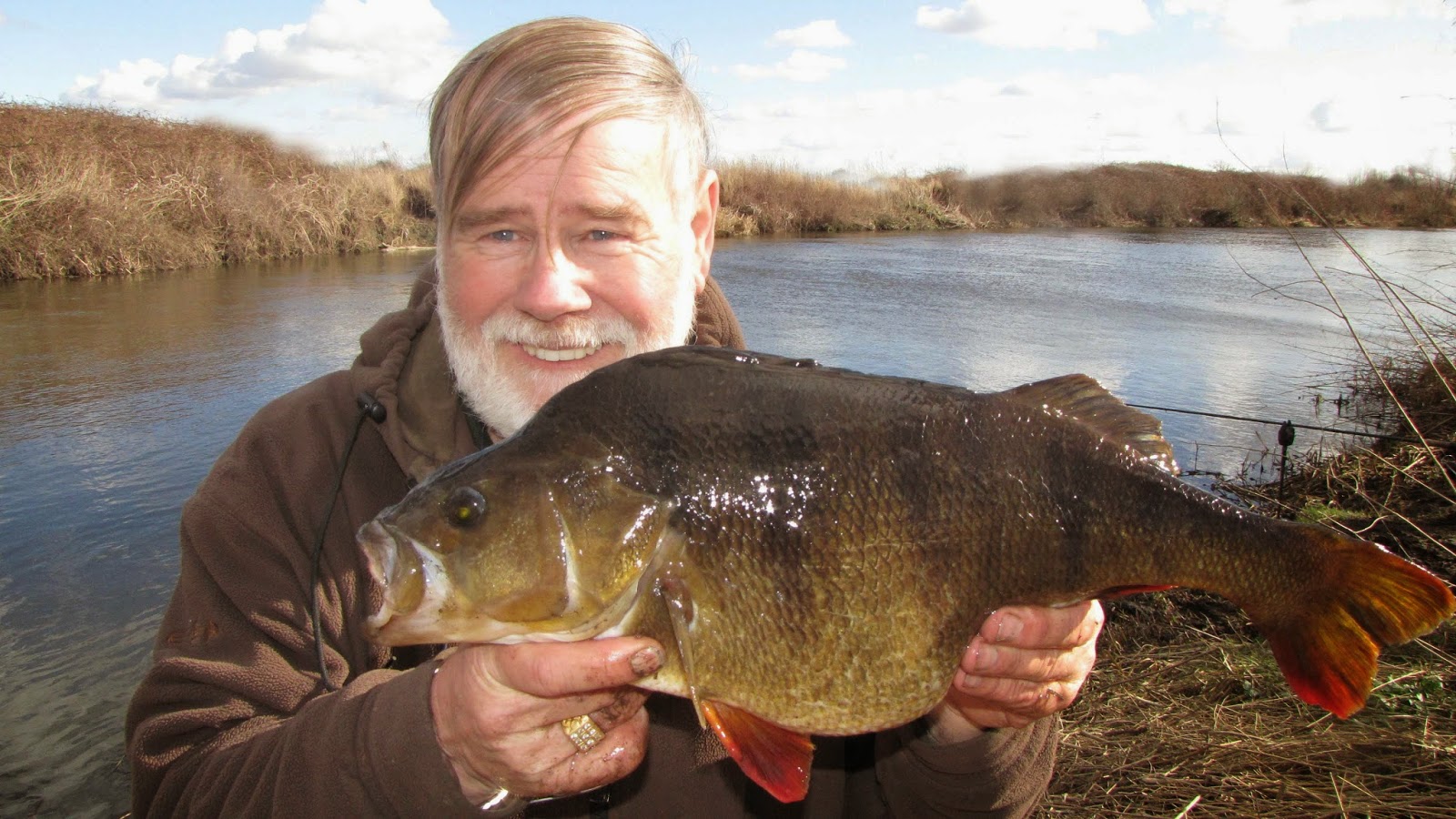 I had hoped for a 4lb perch and as I looked I could see I had definitely got it.  That said, when the scales showed a weight of 5lb-4oz it was well beyond my expectation and it now ranks amongst my top three all-time personal bests.   I thought the dimensions would be of interest to many and these were length 19.125 inch with a girth of 16.5 inch.  One thing is definite about this fish and that is that the weight and dimensions cannot possibly portray the fish I was looking at on the bank.
Over the next week I did a bit of perch fishing on a local stillwater and took a good number of 2lb and 3lb plus fish though not the 4lb specimen I was hoping for, still a bit of time for that yet.  A trip to the Warwickshire Avon gave a nine fish catch of chub with two over 5lb, the target was barbel and with the addition of two of those at 3lb and 6lb it proved to be a very active day. 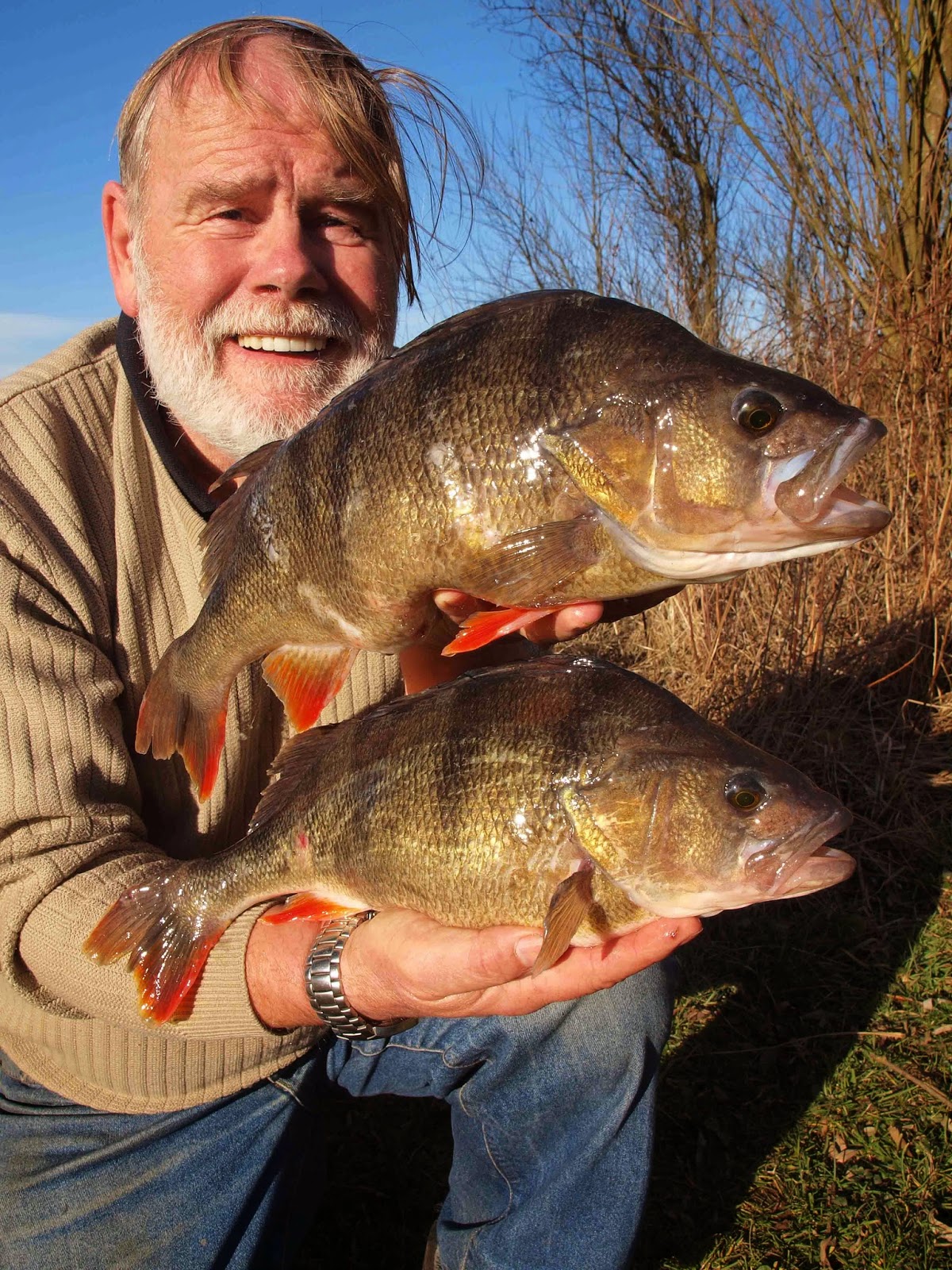 A good brace of stillwater perch

I had thought to let any interest in the big perch die off and now as the days on the river were running out I decided I would return to try for one of her larger relations, be it sister or brother I did not mind as either would be quite large.   On the previous trip I had used just one rod, this time I decided to include a second float rod which I would use to present a prawn bait in appropriate areas where possible.  That first perch had come within 20 minutes of me starting but this time I searched swim after swim without any indications and as time ran out I returned to the large slack where I began.  As my self-imposed 6.00pm deadline approached I put the float rod away and tidied up the rest of my tackle.  Still feeding the red maggots into the swim, along with the slow retrieve and with just 10 minutes to go the tip finally pulled round in response to a bite.  This time the fight was worthy of a big perch and all the time I was hoping the hook would hold as the fish was shaking her head in the normal fashion of the species.  It did hold and I landed another large perch but I thought it was the same fish and the weight suggested such was the case.  I took a couple of photographs to conclusively confirm this thought and they did just that showing a slight dip in the lower lobe of her tail.  Of course a pleasing capture, but I had hoped for a different fish and now that must wait until next season as long as these monsters stay around that long. 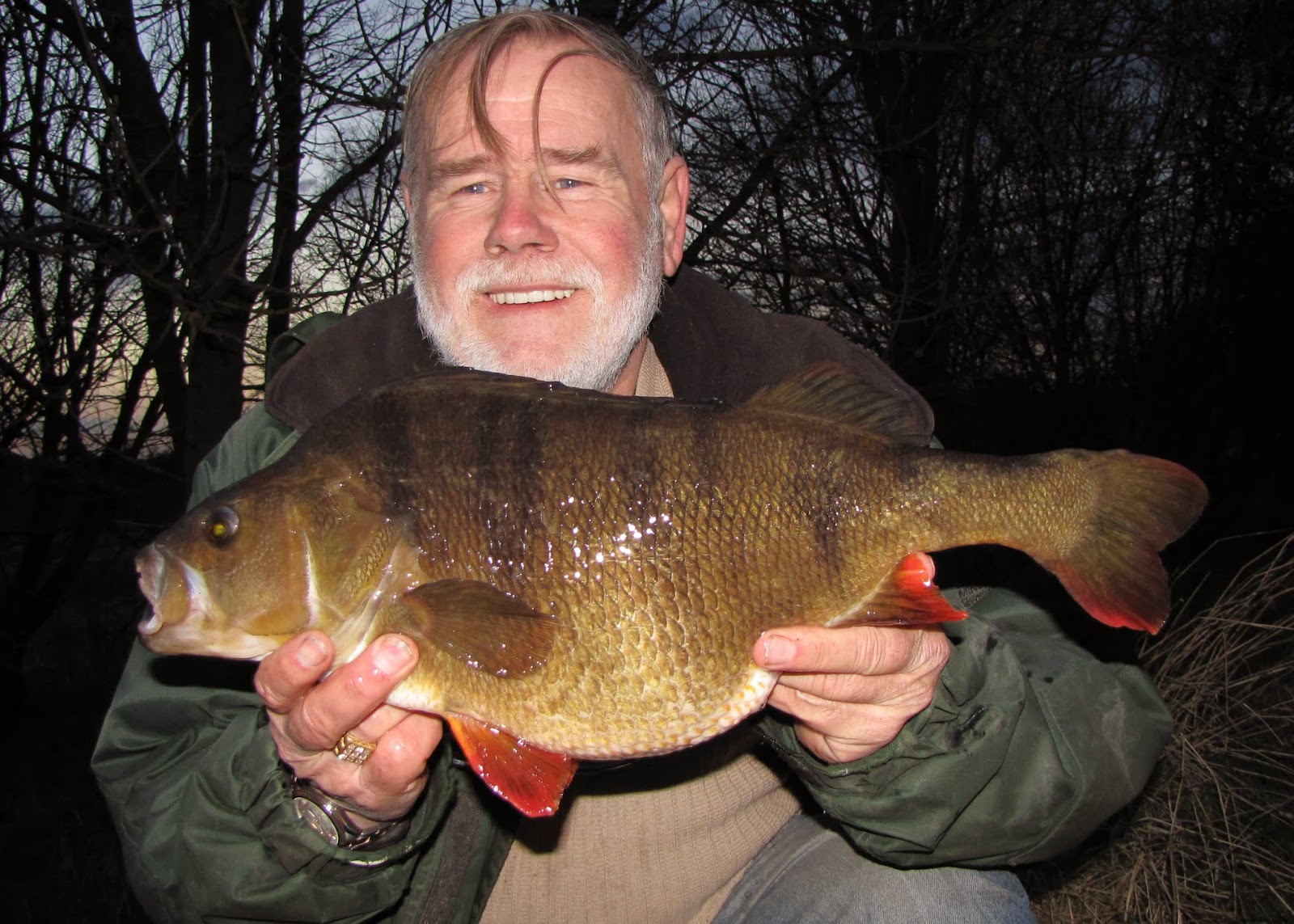 Still 5lb-4oz and worthy of a photo.