It’s been a long spell since the last blog, but that just indicates the conditions and my lack of interest in fishing after the Suriname trip.  Last week I did a little perch fishing with just a few fish up to a best of exactly 3lb, the rain made photos difficult especially when the remote played up.

This week I finally got onto the river and a trip to the Warwickshire Avon last Sunday was the first river visit of the year, highly fishable but I suffered a total blank.  With the water falling I decided on another try on the Tuesday, this time the fishing gods smiled and gave me my first barbel of 2014 at 9lb-14oz when he picked up a large chunk of heavily flavored meat.  I fished into dark, but that was the only chance I had though it encouraged me to try again the following day. 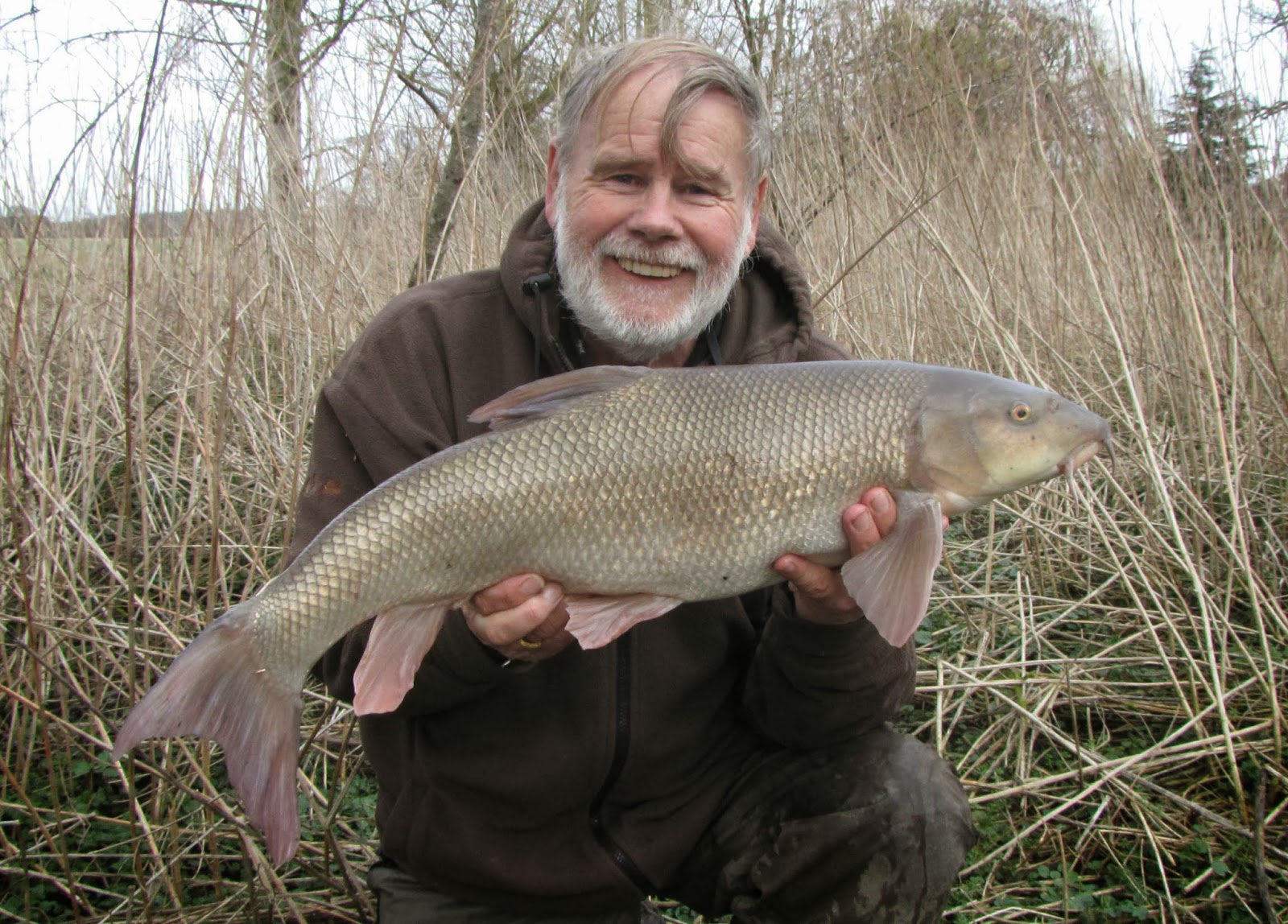 On Sunday the water temperature had been 6C and now it was 7C a fact that gave a lot of hope for the fish to be on the feed.  With a good size river in front of me I was fishing two rods, one using Elips pellets as bait and the other on the same flavored meat that had given the previous fish.  Both were fished with just a straight running lead rather than the usual feeder that I use.  Following the cold weather and flooded rivers there had been very few anglers on the banks, I could see by the undisturbed mud in the swims that no one had been on this length of river since the water level had dropped.  My thinking was that although I thought the fish would be moving about I did not want to over feed them in these lower temperatures hence just single baits.  The weather was great, quite mild with just the very odd light shower that hardly dampened my coat.  Sitting the on the river bank again and watching the surrounding wildlife, it was terrific to be out whether I caught or not. 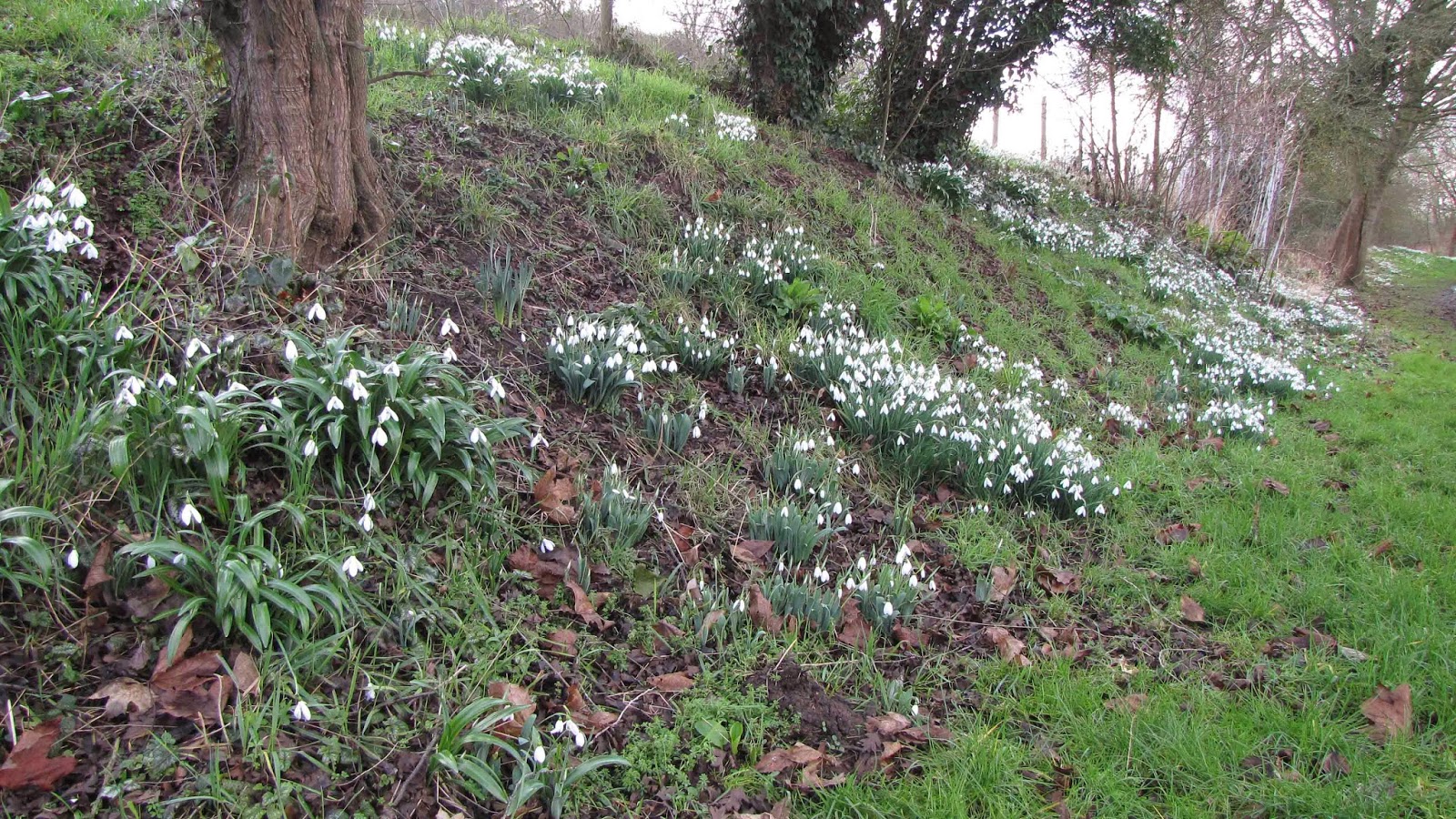 Spring is just around the corner.

Of course I wanted to catch, and when the pellet was taken by a hungry fish I was pleasing to hit into power as he screamed off against a quite tight clutch setting.  The high water gave him more help as if he needed it and I knew this could be something special, when he finally went into the net that thought was confirmed when its weight came in at a very pleasing 11lb-13oz, welcome to 2014! 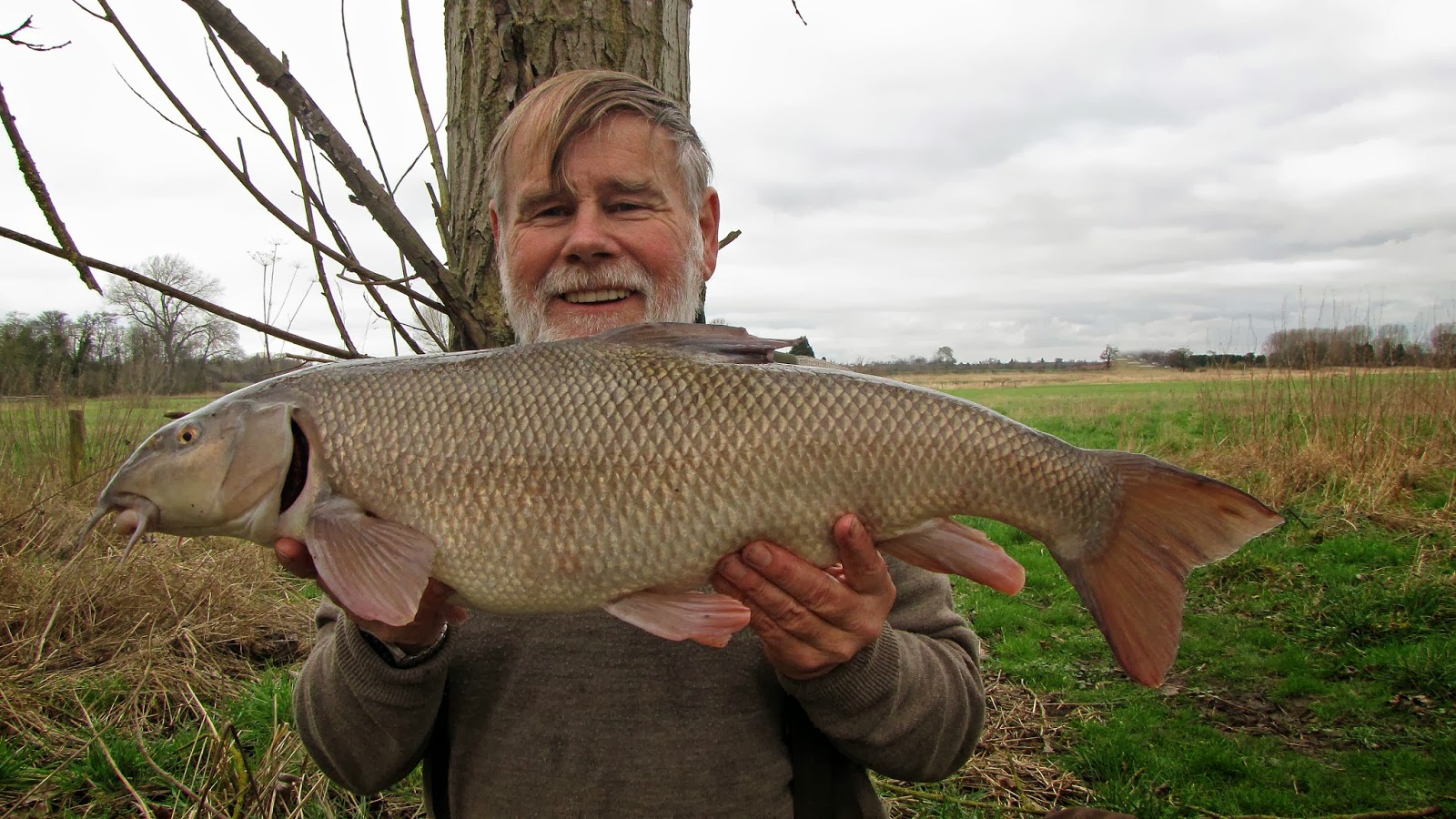 The pellet bait was replaced and before too long I was playing another good fish that had picked up the meat, a different fight to the first in that it was slower and more powerful but the result was the same and it came to the net having been beaten in the fight for supremacy.   This one turned the numbers round to 11lb-6oz to give a very memorable brace for this river.  That was it for the day, but the long miles home seemed that little bit shorter as I replayed the events of the day. 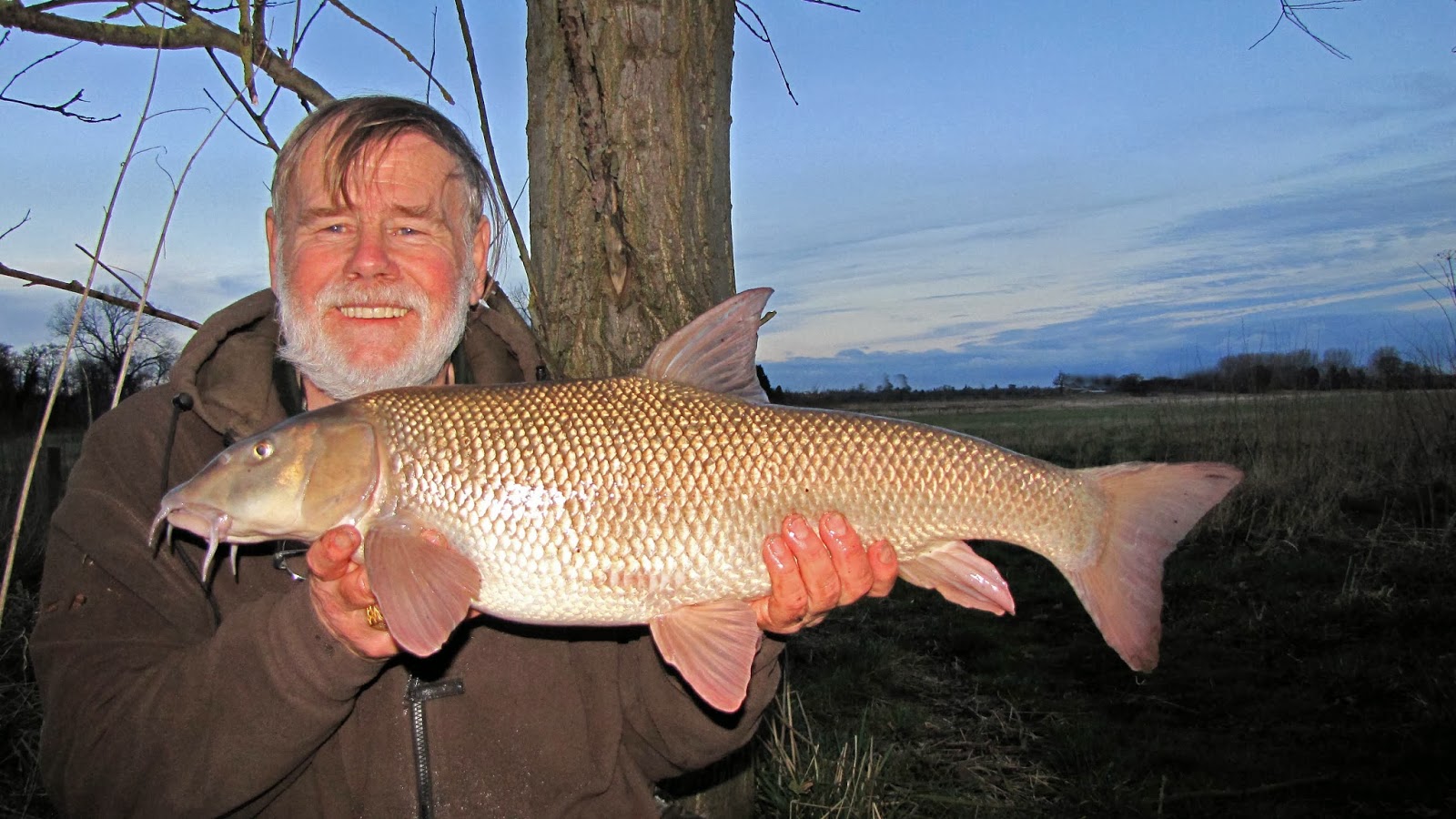 11lb-6oz barbel to complete the brace.

One of the biggest advantages of being retired is the ability to take advantage of good conditions.  I well remember all those years at work where the middle days of the week were always better than those at the weekend.  With results so far and another fair day to follow I decided I must try again so the following day saw me back on the banks yet again.  I moved about 80 yards downstream of my previous day effort with the thought that I might have disturbed the fish there and events suggested I was right.  A slight point on the bank gave rise to a slack running along the nearside and I could see the remains of a rush bed just showing in the now clearing water out in front of my position.  The pellet rod went out to the outside edge of the rushes and the meat went down onto the crease of the nearside slack.  With a new swim, [I’d never even seen this one before], I always wonder if there are any fish present, since quite often the fish have not read the books to know that the features are perfect for them to be present.  As it turned out I soon had my answer as a fish of about 6lb or 7lb took the pellet bait with the downside being it was right in the middle of the only heavy rainstorm I suffered on the day. 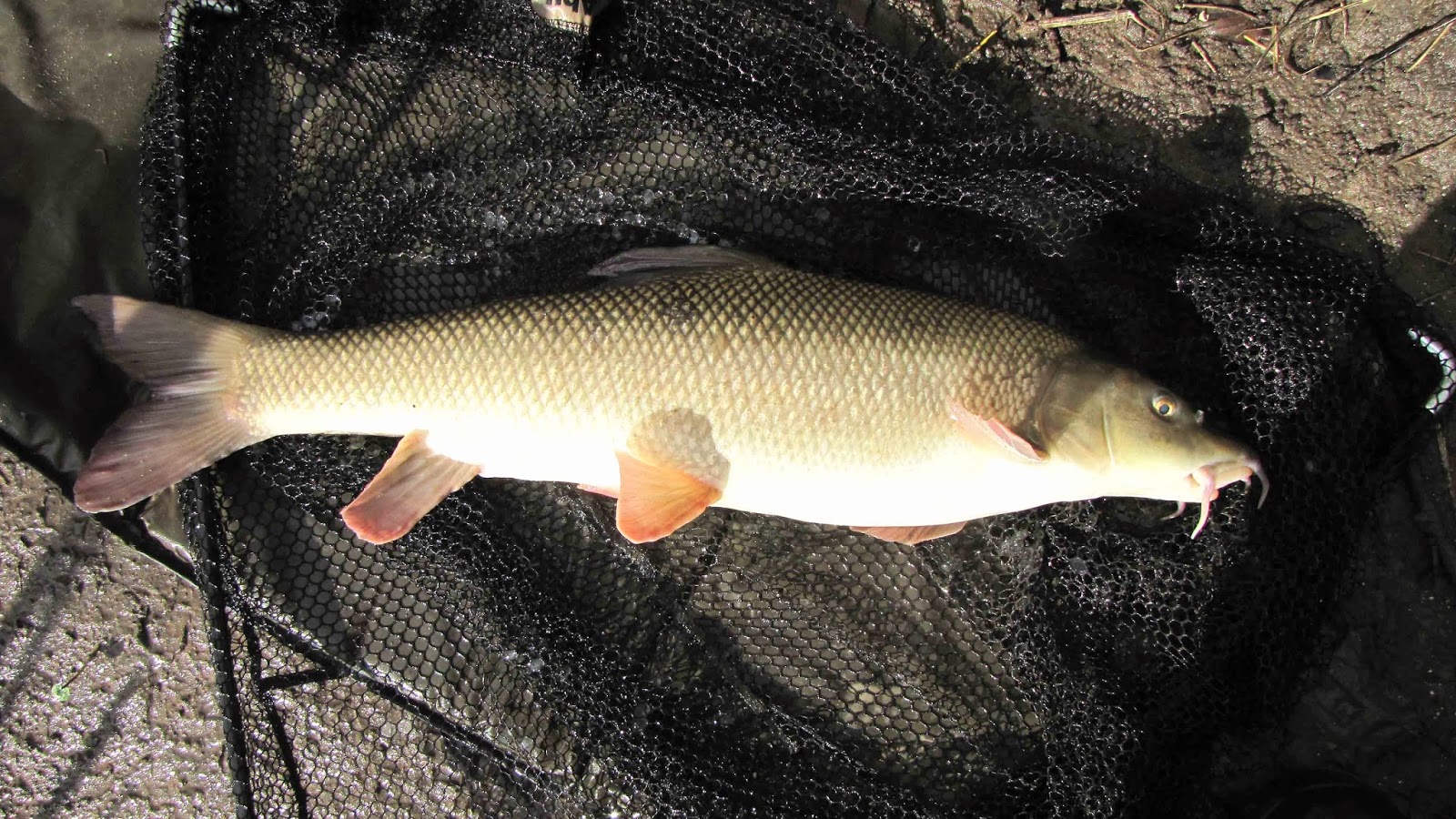 Still that was a start and it was followed shortly after by one of those unexpected highlights that can make fishing such an enjoyable sport.  I got a take on the meat rod and for a while I played a fish I assumed was going to be a barbel of maybe 5lb, it held deep and ran upstream in the heavy flow and when a chub appeared I was probably just as surprised to see him as he was to be there on the end of my hook.   The thing is it was not just a chub, it was a big chub that eventually took the scales to 6lb-5oz.  Now I’ve had lots of 6lb plus chub and some going over 7lb but this is the equal of any of those coming off this river where 3lb and 4lb are the normal size fish you catch.  It had been caught on barbel gear, though very pleasing never the less. 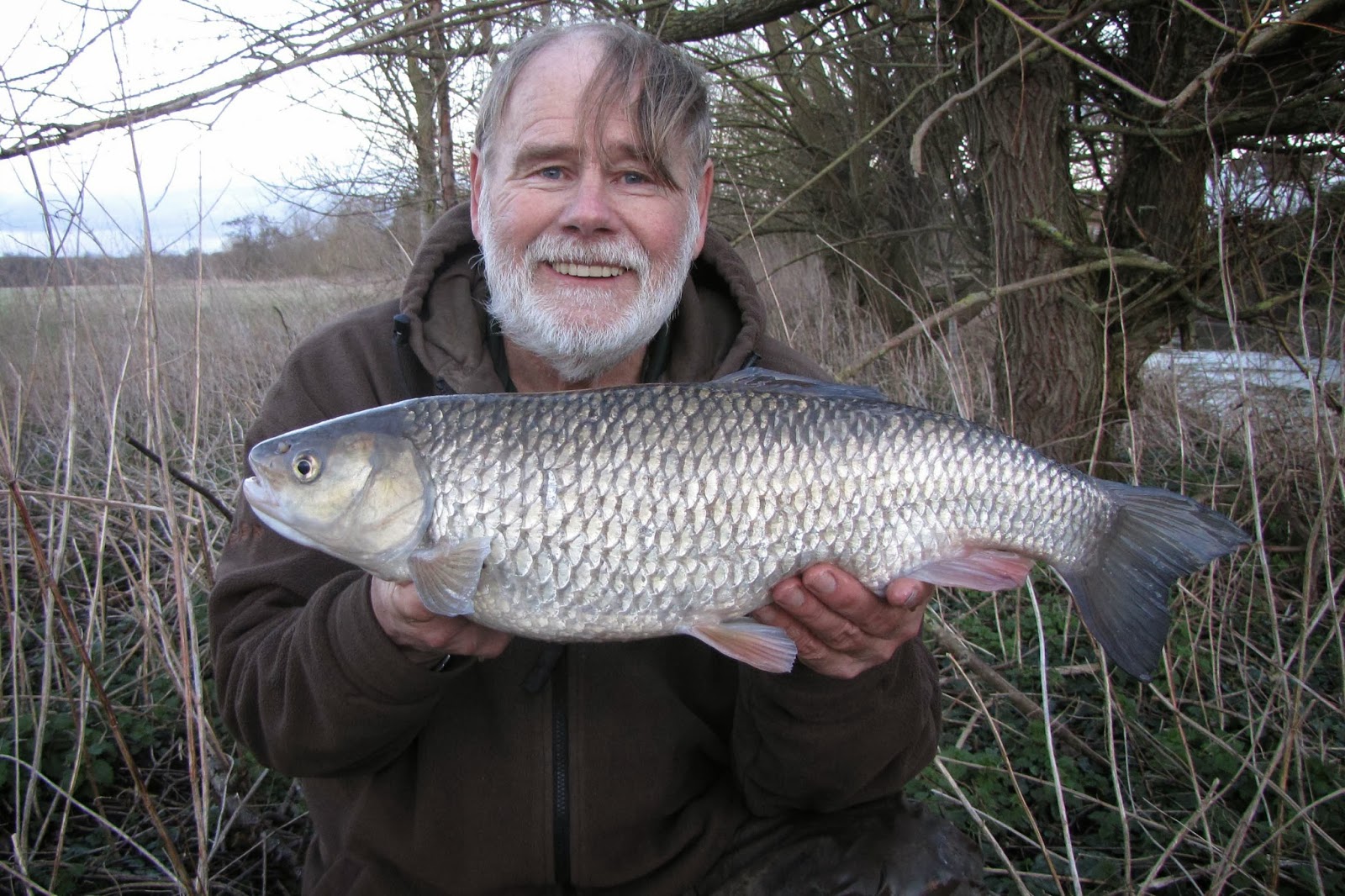 That fish would have made any day but the gods were really smiling since just as dusk fell I hooked into another big fish that had taken the pellets and yet again another large barbel slide over the rim of my net.  The scales showed a weight of 11lb-13oz and being a realist I suspected it would be the same fish as the previous day and a check of the photos did confirm that point.  By using blinkers it is very easy to over estimate how many big fish are present in a stretch of river.  With weight variation and travelling good distances it can appear there are far more fish than is reality.  Still, I was not in the least bit worried, it took as much to catch him the second time as the first and it could well be I will never see him again, that’s fishing.  With five barbel and three of these over 11lb along with the big chub my 2014 river season was off with a bang I hope it continues. 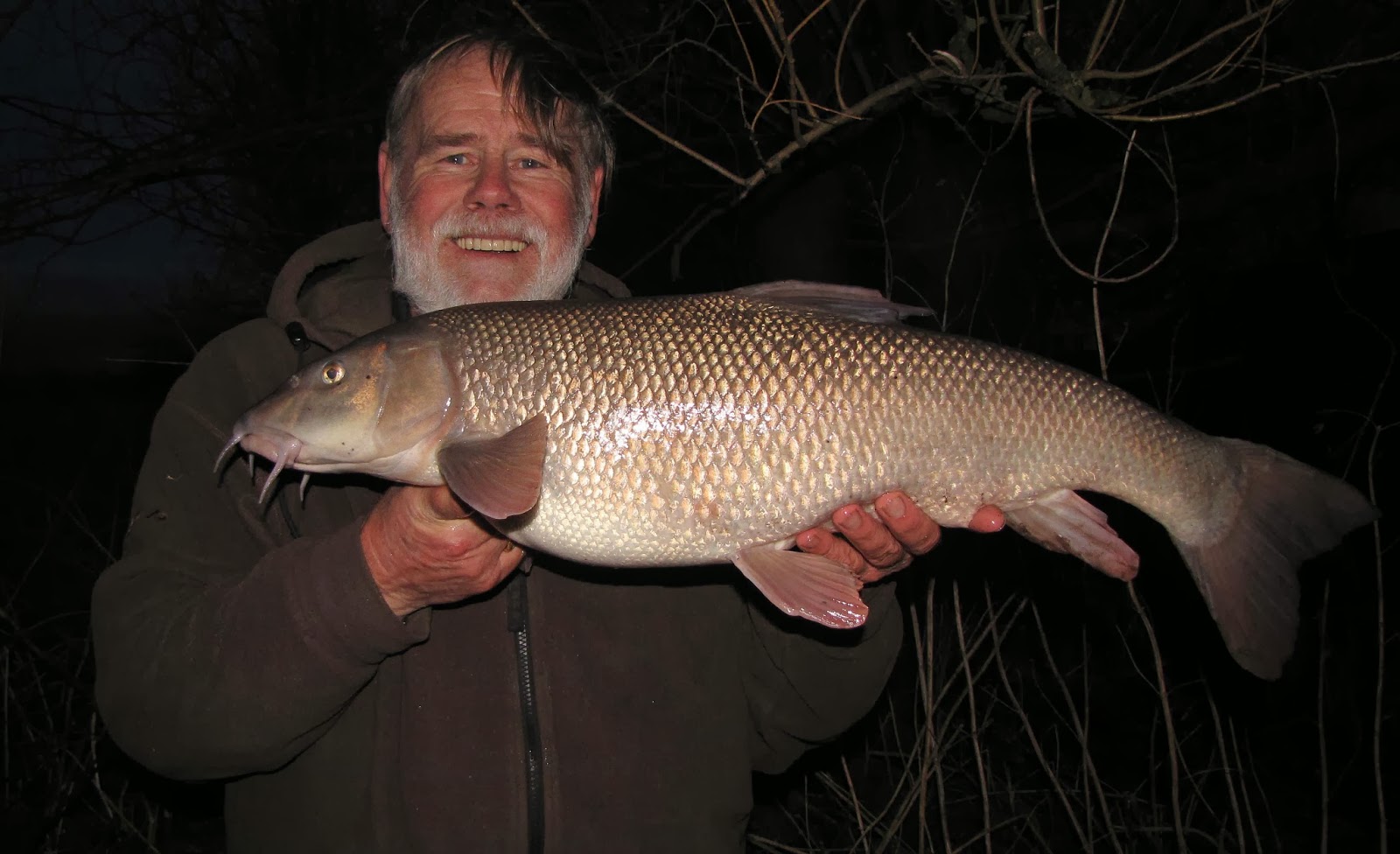 With just two weeks before I’m off to Guyana it remains to see what that time has in store but I’ll let you know.
Posted by Travelling Man at Sunday, February 23, 2014