Variety is the spice of life.

As with most weeks it has been a mixed bag, both in target species and results.  On the Saturday following the Barbel Challenge I went back after the eels, a quick and easy overnight session that resulted in a total blank, maybe next time.  I had arranged to travel down to the Kennet region to stay with John Found for a three day trip so early Tuesday I arrived on the Kennet and we met up to give the barbel a hammering.  Not to be and even though we were prepared with casters and hemp just one 7lb fish fell to John, very disappointing and as with so many of these occasions without explanation.


The following day we were due to go down to Johnson’s Lake on the Marsh Farm complex, crucians are the target here and at this time of year a 3lb plus fish is the target weight.  We float fished from about 4pm through to 11:30pm but struggled just two crucians falling to John’s paste one smaller in size but the other at least 2lb plus.  One of the problems was the large number of one inch fry that stopped the normal fine tactics we know work.  We caught roach, rudd and tench in reasonable numbers but the crucian bites were probably amongst the dips and waggles that were occurring all the time, it needed a suicidal fish to show its interest.  With two days gone and virtually nothing to show for it we approached Thursday wondering what it would bring. 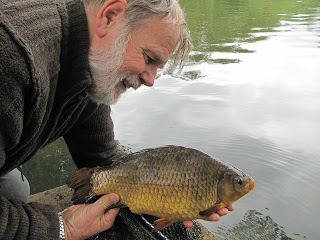 These were the target

Choosing two different swims to those used on the Tuesday, we began the bait and wait tactics that were the order of the day.  I’ll run through mine but John would be duplicating the same with very little difference.  My swim was typical of the Kennet in that much of the river sections are left almost undisturbed and there are lots of features to fish to.  This one had a large bush going out into the river just downstream and on my bank, the opposite side had smaller bushes running along the bank these giving about two or three feet of cover over the river perfect for the fish to feel safe in.  There was a slight gap in the line that allowed me to bait drop across against the bank and lay a trap for fish moving up and down through the swim.   A pint of caster mixed with hemp went out and the swim was left to mature for an hour or two.


Unlike John I do use two rods and I had decided to fish a pellet alongside the near bank bush so having chucked half a dozen pellets in I cast out and could wait for fish to turn up.  Sometimes there is a fish already in the swim and this was such a time, after just a few minutes the rod top went round and I land a hard fighting 5lb barbel, nice start.   After perhaps an hour I baited up again with a similar amount as the first time, the hemp is the attractor and the casters will hopefully keep the fish in the area once they arrive.  If you cast out too early there is every chance you will catch but the fish you catch was one of the first to find the bait and now you need another to take the chance.  By leaving the area time to mature that first fish comes into the swim and then leaves, later he returns with a mate and leaves again.  Now other fish are picking up the signal that there is food about and apparently with danger so they tag along as well, on clear rivers I’ve seen this happen and when you cannot see in then your need the hope that it is happening just the same, sometimes it is not, but when it works you can bag up.  Today was to be such a day and when I topped up the swim again about thirty minutes later I cast out the baited rig.
The caster rig

This is a running leger and 15lb braid going to a size 10 Pallatrax hook, one artificial caster is threaded onto the hair and then three or more live casters are glued to that, nice and simple, but deadly. 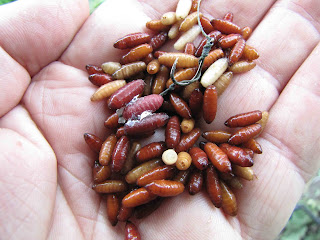 I did not wait too long before the first barbel made an appearance, often they take within moments of that first cast but maybe there are not quite as many fish here as on the Trent or some other rivers.  These fish are fit and healthy and the fight does remind me why I love to fish for barbel.  This one went 8lb-7oz and it was followed through the day by others of 5lb, 6lb and of 8lb-12oz and the cherry on the cake a 10lb-2oz fish that would not keep still for its photo.  All the time I would just give the occasional top up and break in order to give the fish chance to return but once they know the feed is there they are reluctant to give up completely, I’ve even seen barbel continue feeding while I’m playing one already hooked from next to them. 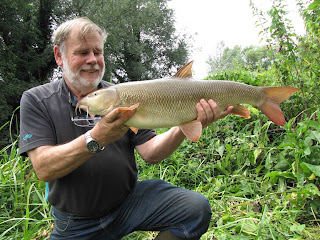 Meanwhile John had been keeping up with my catch rate; in fact his best fish until near the end was the same as my first one at 8lb-7oz.  Then he beat my running total with a 10lb-8oz fish, his tenth of the session with a bonus? bream.  The walk back to the car at dusk was certainly more pleasing this evening than those previous two, but then if you don’t fail how would you know you have succeeded? 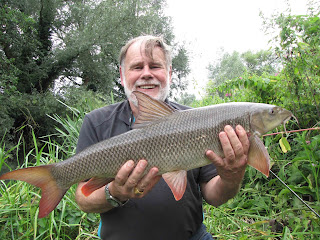 Back home and with all the rain being forecast on Friday night/Saturday I thought the river might respond so on the Saturday afternoon I made my way up onto the River Derwent with the intention to fish into dark.  Lots of people did have significant downpours but I didn’t and the river was still low and steady.  Today I would use boilies and had chosen to fish Source under my own bank and Crave on the far bank alongside a line of overhanging trees.  It was a nice night, mild and fairly still only being disturbed by the passing trains that run between Derby and Nottingham.  Trouble was I was also only disturbed by a single chub of 4lb-14oz and a snotty bream about 6lb that I did not weigh.  Always better than a blank since for just those few moments when the bite initially occurred it might have been a barbel and the heart rate jumps up in eager anticipation only to fall back again with the lack of powerful resistance that is the signature of a big barbel. 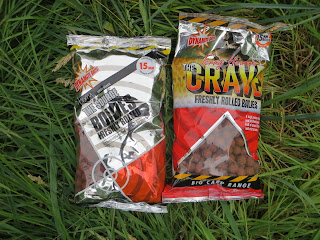 Bait to use for the Derwent 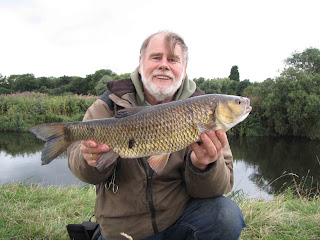 Until next time I wish you tight lines and lots of sport hopefully I’ll have the same.
Posted by Travelling Man at Sunday, August 25, 2013