A monster tench and a new pb.

It has been a strange month with fish difficult to catch, not just by me it would seem the reports were a similar result on many different venues.  Once I had found the Johnson’s crucians had spawned, I turned my attention to the tench and I decided at that point that with the cold Spring I would stay on the tench until they spawned as well.  Of course I would drop the occasional river trip in once the season opened, but tench was to be the main target.  It was expected that the London venue I fish would be difficult, it always is, but I did not expect the local tench water that was so good to me last season to be almost as hard.  All the regular anglers on the lake reported the same; blanks became the normal result with just an occasional fish coming to the net.  It seemed the rivers had similar results with a few good catches as always, but many were struggling though that is not unusual at the start of the season.  Once a couple of weeks had passed and the picture was the same it did give cause to wonder just what the weather and fish were doing to each other. 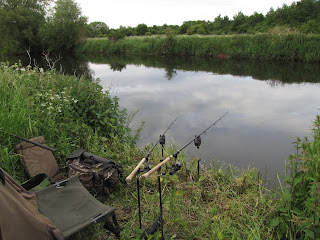 Opening day on the River Tame.


I had a couple of evenings on the River Tame at Tamworth but other than a couple of knocks on the rod tip nothing happened and I returned to the tench.  Just looking at my diary for June and I can see that my day’s tench fishing were adding up, five days on the local water where nights are not allowed, and eight nights giving 10 days on the Bream/eel/tench water.  I fish for the bream and eels overnight and change to the tench at dawn, bit of a compromise but it seems to have worked over the previous seasons.  I think the bream are disappearing fast and both last season and this I have struggled to catch, previously I would make quite big multiple catches on a regular basis but that is no longer the case.  My best bream from this water is 14lb-2oz but I sure there will be 15lb + fish and maybe even the 16’s or 17’s left as the shoal dies off, all I’ve got to do is catch one of them.


This week I decided on one last trip on the local tench lake, that was Monday and I blanked.  Tuesday I got the gear together and at 6.00pm I left for London with a view to being on the lake ready for the dawn start on Wednesday. A friend had advised he had seen tench although they were on the least accessible section of the lake and it would be quite a job to get the tackle to the swim.  A public footpath passes right by the swims on this section so all the tackle needs to go in one hit if you are fishing on your own.  Leaving some in the swim and going back to the car would be asking to loose part or all of it!  Even with a barrow this trip near knackered me and I took three stops on the way, many years ago I would have done it in one and maybe run part of the way.  With method feed, maggots, worms, swimfeeders and flatbed methods, six rods [spomb and marker rods, three bream/ tench rods, and an eel rod] brolly camp, water and the other odd bits you need like cooking gear and food, it’s a wonder I survived. 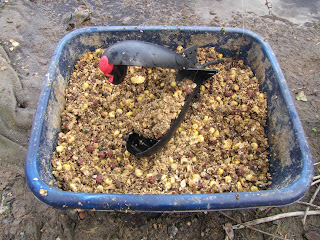 Dinner time for the fish - I hope!

Once at the swim I quickly set up the marker rod and had a bit of a chuck round to see if I could find any features, I found a small bar about 30 yards straight in front of my position, about 5ft deep, off to the left it dropped off into a gulley at about 7.5ft, two rods in the shallow section and the third in the deeper water, job done and I left the marker on top of the bar.  Now it was a simple matter to cast out the Spomb to the marker and clip up ready for putting out my feed.  I now cast the tench rods out to the marker as well so I could put a little power gum on to the line as a marker for length giving the confidence that my bait would always be in the baited area.  Since I would fish both swims at the same distance I could now reel the marker in and start baiting up using the skyline marks I had taken to show where I would be fishing.  The method feed was based on crushed Vitalin with added Dynamite Silver Explosive X mix to give a guaranteed breakup of the mix once it landed.  To the mix I added hempseed, 10mm Source boilies, sweetcorn and casters along with a few glugs of molasses.  Using the large Spomb I find that it will take about my maximum handful of feed each load with it piled high before I snap it closed, I put eight of these out to each swim in turn and I was ready for the rods. 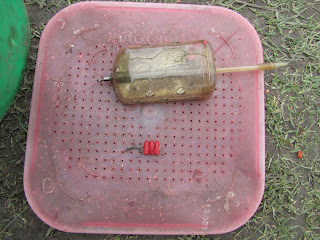 Rubber casters on an inline feeder. 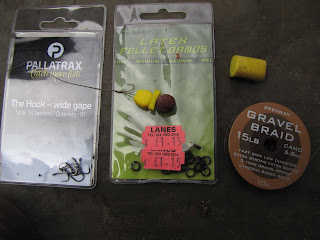 Successful rig and bits to make it.

I started with three different hook arrangements, one on rubber casters, one on a maggot feeder and the last on a combination variation to that shown previously on the blog.  With a bait band tied on to the end of the hook link I slide a piece of artificial corn up next to it and then use a knotless knot to tie the size 14 hook on the rig to finish it off.  Leaving about 4 inches length I ties a figure of eight loop and attach a swivel, then I could place a 10mm Source boilie into the bait band and job done and ready to fish.


At dawn I reeled the eel rod in with the lobworm bait still perfect and untouched, now it was just a case of recasting each bait back out, two in front of me and the other to the left hand swim.  Two of the rods could be left for an hour but the swimfeeder rig needs working and this was recast at regular intervals.  The good thing was that the tench did roll, not at dawn but an hour or so later and they kept it up for about an hour before the activity almost stopped.  Then just an odd fish would show but no bites came to either me or my friend fishing the next swim along from me, very frustrating.


By the time that 10:30am came about I was being to wonder about the weed I was fishing in, perhaps that was masking the baits so a change was needed.  The artificial casters were already being fished popped-up but the other two rigs were on the deck so I set about lifting those as well.  A buoyant maggot lifted the swimfeeder bait and then for the combination rig I placed a slice of foam between the corn and boilie, now all the baits would lift the full 4 inch of the hook link and just maybe be showing above the gossamery silkweed that covered the bar.  Maybe one hour later I got my first positive bite on the water this season and struck into solid resistance, weed was my thought and I expected to need to bring the fish back through solid weed beds.  Taking my time I just gave a steady pull with the 1.25lb test rod wrapped round but no indication of a fish, no thumps or any other encouragement that the fish was out of the weed.  I began to worry since all too often the weed will take the fish off the hook and it is lost, but then I noticed it had kited to the left!  Weeded fish don’t kite – this was obviously just big and heavy and that suggested a nice fat female out there resisting my attempts with steady power.  When it came into sight the size 14 hook took on a whole new meaning and I wished it was more in the size 6 sort of category, but I need not have worried as the tench went into the net. 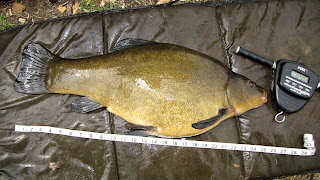 
Just occasionally you look into the landing net and wonder just how big your latest fish would be; this was obviously very big but with the depth of its body just one inch either way in length would make pounds difference in weight.  All fish in this state so close to spawning need extra care and I took my time getting scales etc ready to make her time on the bank as minimum as possible.  First I weighed and use a tape measure to get the statistics, then she was returned to water to rest before I took a couple of photographs.  12lb-1oz with a length of 25.25 inch and a girth of 25.75 inch, a new pb and a real monster that compares very well with any of my other species pb’s.  I caught my first 6lb plus tench in the 1972/3 season and that went 6lb-10oz a real monster in its day, now I had nearly doubled that figure to get a real monster for these modern times.  When I caught that first six I did not think I could reasonably expect to improve it, time showed I was wrong, but can I improve this one, well that’s an open question though it will be very difficult. 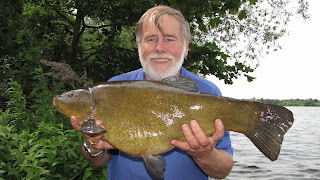 A perfect capture of 12lb-1oz tench 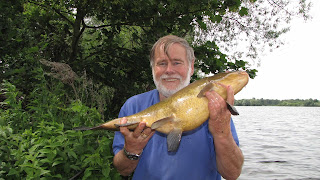 This shows the thickness of the body.


As a matter of interest it fell for the Source boilie rig and I soon changed the second rod over to the same set up but it was to be my only bite.  Fate or luck, call it what you like but with ten days on a 100 acre lake and just one bite and it’s the big one.  I chose this water to concentrate on because I knew that could happen, but how often does the plan work; most times you are on a blank and dreaming of what might have been.