Good fish to weigh at last.

It has been a very poor start to the year for me as identified by the low level of blogs I've published so far in 2013.  In fact although the weather has been uncooperative, it is a fact that I’ve fished over several days for pike, chub, or barbel where conditions were certainly good enough for me to succeed.  Rather than succeed, I totally failed to catch any fish that were anywhere near worth getting the scales out just for practice.  Several times I have had to cancel what would have been interesting days for either river roach, or the big grayling fishing that I’ve got planned, floods and deep snow can block any trip if common sense prevails. 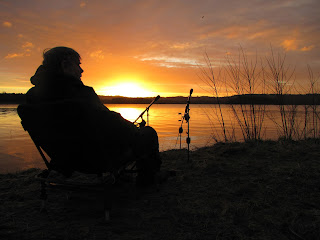 Now at last the planned trip to Chew Res has arrived and at last there are fish to be weighed.
Having obtained tickets for two boat days, I invited Rob Thomson to join me in the February for those days, he confirmed it with his wife, and plans were made.  As the day drew closer I was concerned with the high forecasted winds that could mean the boat would not go out meaning that a lot of that day would be lost.  At the last minute we decided to fish from the bank and forgo the boat, I confirmed this with the lodge and all was ok.  As the dawn broke we were in place and the rods were ready and waiting the attention of the first pike of the day. It was cold and the strength of the wind convinced us we had made the right choice, although some boats did venture out, I was told by a friend that it got quite hairy and very wet in the spray.  Still, at about 7.45am I had the first take off a pike and went on to land a short fat fish of 15lb 14oz, a great start and the boats would not be out for another hour.  Weighing, photographs and the fish returned no sooner done than Rob had an indication.  He had just recast one of his rods and another few minutes would have brought the other one in to recast as well, how narrow is the window between success and failure.  Again a superb fish typical of trout reservoir pike, short and deep giving a deceptive weight when guessed, they just are shorter than expected and so weigh less than your first guess.  I guessed 28lb; it went 26lb-4oz and a new personal best by some margin for Rob. 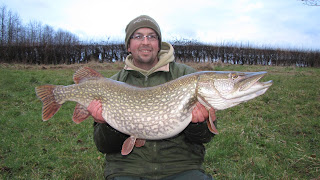 It had been a bit chaotic but eventually all the rods were back out and we sat back for a cup of tea, not for too long though as yet again Rob was in action.  This fish kited to the right and crossed my lines before tail walking quite spectacularly before being safely netted.  She looked bigger and so it proved as the scales indicated another personal best at 27lb-10oz of perfect pike.  That proved to be the last of the action and nearly all of it before the boats would normally be about. 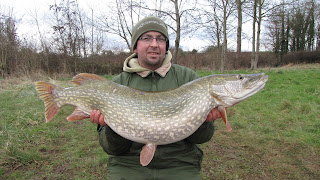 
We had a conference at the close of play and having heard of fairly dismal results from many anglers on the water we decided to stay on the bank since the swim did seem to have feeding fish present and that is a good start, maybe they would return the following day for another feast. Yesterday had been very overcast and the sun did not appear, this morning it was quite a sight as it peaked over the far bank and although there had been a heavy frost it lightened the spirit to see such a glorious sight.  We waited to see if that early feeding spell would occur again and sure enough at just after 8:00am my rod was in action again and I went on to land a very spirited pike of 19lb-14oz.   Just short of the 20lb mark but we had made the mistake of remove several baits whilst getting my hooks out of its mouth, it is often said that they are all just figures and numbers but some numbers have more kudos than others, this was such a case.  Following that we fished through to dusk with just a few indications that suggested trout would like out bait but they did not commit to taking it. 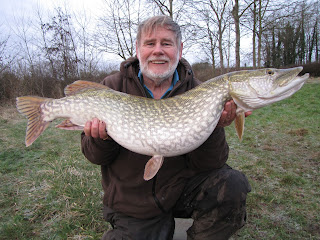 
I resorted to bird watching and following a miss identification of a duck I thought was a tufty at a glance - there were lots of them about - it was eventually identified as a goldeneye, the first time I have positively seen one.  With shelduck, mallard and lots of other water fowl about there was lots to observe so at least it allowed the blank hours to pass.  A good result for me and a brilliant result for Rob, with two more days booked in October I certainly look forward to that. 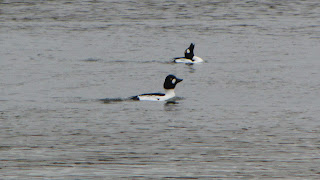 Two goldeneye males after the lady. 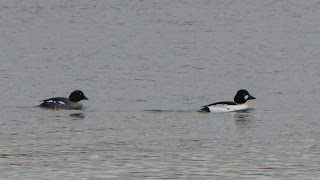 And the victor goes off with her.